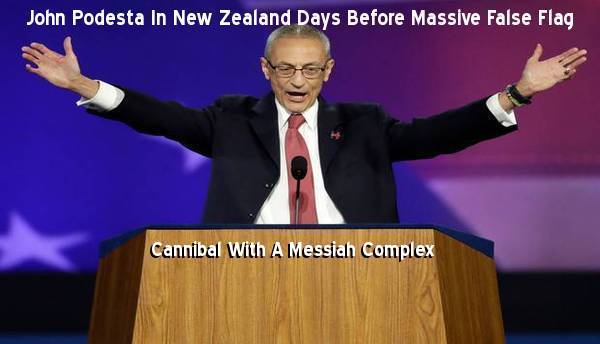 While I woke up this morning expecting to write a story about just how incredibly deeply corrupt America has become as Michael Snyder reports in this new story over at the Economic Collapse Blog following the college admissions scandal that has rocked parts of Hollywood and some of the global elite who were buying their children’s way into some of the top universities across America, I was immediately sidetracked by some of the absolutely bizarre coincidences and signs following the mosque shooting in New Zealand that the globalists and mainstream media want EVERYBODY to know about because it perfectly fits their agenda.

Despite the fact that scumbag cannibal John Podesta was just in New Zealand days ago to warn that the 2020 New Zealand elections are a ‘juicy target’ for a major hack (why is POS Podesta still relevant, by the way?), and that the entire scenario in New Zealand provides the perfect opportunity for the globalists to further censor the internet, this ‘attack‘ completely demonizes the ‘alt right‘, President Trump and his supporters at a time when the globalists are attempting to take down his presidency.

As Mike Adams reports in this new story over at Natural News talking of the photo directly below, “here’s a screen grab of the video the shooter live-streamed on Facebook. Note the bizarre scrawling in white marker on this shotgun which was used at the beginning of the shooting. The fact that this event was carefully scripted, video recorded and published on social media proves that this real violence was staged as a global media event to achieve a specific political purpose.”

What might that ‘political purpose‘ be? At a time when even President Trump is hinting at a potential civil war in America as was reported within this Daily Mail story, and ‘nationalism‘ and ‘populism‘ spreading rapidly around the world at a time when the globalists had hoped to ‘have the planet in the bag‘, it’s quite clear that nothing is off limits to them in their goal to take down President Trump and demonize his supporters while completing their ‘end game‘ for America. 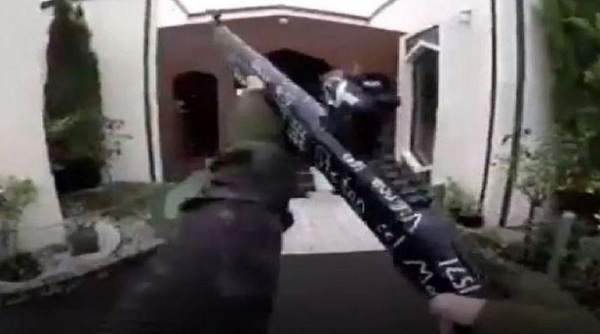 So we’re going to jump right into an extended excerpt below of Mike Adams absolute must-read story and his description of what he believes may have really played out in New Zealand, with the country also a member of “Five Eyes“, an intelligence alliance also comprising Australia, Canada, the United Kingdom and the United States: “These countries are parties to the multilateral UKUSA Agreement, a treaty for joint cooperation in signals intelligence.”

As Adams tells us, all of what happened in New Zealand appears to him to be a staging of events to provoke more hatred and war and it’s quite clear, the demonization of anything ‘President Trump‘, including black Conservative Candace Owens who one of the shooters mentioned within his rambling ‘manifesto‘ that was pushing for civil war in America.

As Adams also points out within his story, there are also reports of three different shooters at two different locations, showing some level of co-ordination that absolutely hint at the type of co-ordinated deep state false flag shootings we’ve seen over and over again. And as Adams points out, twitter just helped them achieve their ultimate goal. Might that also be to further censor the internet with facebook and twitter largely powerless to stop the circulation of the horrific shooting video?

The violence is real, but the entire shooting appears to be an elaborate staging of events to provoke more war and hatred… and Twitter just helped the killers achieve their ultimate goal.

Notably, as much as the violence in this event appears to be genuine, it also appears that the shooter was setting up an elaborate narrative to blame conservatives such as Candace Owens, who is for some reason named in a post that was reportedly authored by the shooter. (Candace Owens is a brilliant, African-American conservative commentator who abhors the use of violence, by the way.) Other parts of the post containing hate-filled rants against Islam and a desire to carry out violence against Muslims.

The narrative that this shooter was “radicalized” by intelligent conservative voices like Candace Owens is obviously contrived, and it points to larger questions about who might really be behind this event (and who benefits from the narrative that emerges from the carefully scripted, video-documented violence).

According to the shooter’s own manifesto which was apparently posted to social media, the shooter specifically chose to use firearms to escalate mass media coverage and cause a civil war in the United States. The rantings read like a CIA “divide and conquer”blueprint, or a “problem-reaction-solution” approach to sowing dissent and sparking even more violence. See TheGatewayPundit.com for rapid coverage of tweets and videos, as we are refusing to publish the videos here, since they are too graphic.

Another suspicious fact that’s emerging from this event concerns reports that there may have been three shooters at two locations, meaning this may have been a coordinated, carefully planned (i.e. staged) event. 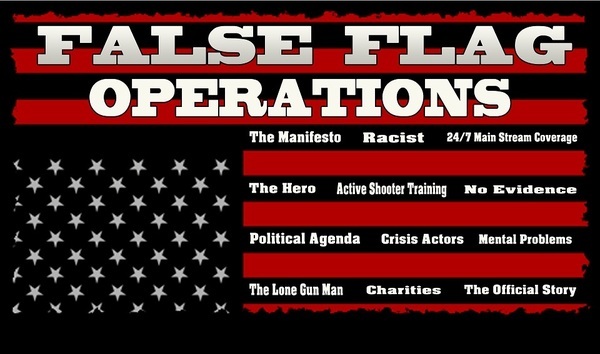 With the New Zealand event already showing several different signs of being a potential false flag event as seen in the graphic above, we’ll take a further look here at the political agendas which New Zealand may help the globalists to carry out with the demonization of President Trump and his supporters now front and center.

As the Daily Mail made sure to EMPHASIZE on the front page of their website, “Trump-supporting white supremacist opens fire and live-streams the massacre!” Yet as Breitbart points out in this new story, in his rambling manifesto, the shooter describes himself as both ‘a fascist‘ and ‘a socialist‘ “depending upon the definition“.

In fact, the shooter who created the manifesto also describes wanting to kick-off a civil war in America while declaring “Conservativism is dead. Thank God.” What President Trump supporter would ever proclaim such an utterance?

With what happened in New Zealand looking more and more like a false flag event to demonize not only President Trump and his supporters but nationalism as well, we can’t help but come back to remarks recently made by POTUS himself.

As Breitbart reported in a recent interview with the President, when asked of all the division in America with the deep state still pushing for a very real coup of his presidency, effectively overturning the vote of the American people, President Trump responded: “I have the support of the police, the support of the military, the support of the Bikers for Trump — I have the tough people, but they don’t play it tough — until they go to a certain point and then it would be very bad, very bad.”

The “Wokeness” Wars Coming to Your Town

The PS5, Social Media and Mass Censorship – What Can Be Done? 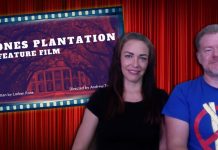 Bringing The Jones Plantation to the Big Screen