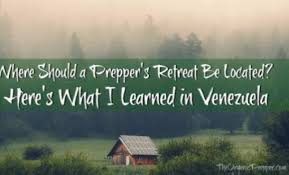 Where should your prepper’s retreat be located? This is not an issue that could be explained easily in one article. Or in a book, think. However, I will do my best.

What was my motivation to write about this? Because I was very concerned about what was going on (logically) and the situation of my parents. However, they seem to be coping well, with the scarce money I can send them. Their needs are not that much, and they have kept themselves healthy, with a diet that includes lots of tropical fruits like pineapples, papayas, watermelon, bananas and the vegetables available year around.

My mom loves cheese, and this is known in our area as being tasty…and greasy! The toll in your veins and heart after a life consuming it is usually pretty high, and the strokes rate is quite high there. Same for red meat. They have been lowering a lot their ingesting of both, and it seems to have been quite good for their overall health. After learning they were collecting a few spoons for the weekly consumption from the coffee plants in a neighbor’s empty plot, I was really much more satisfied. As there is no sugar, sweetening with honey has become a need. Even our traditional sugar cane juice, solidified and hard as a rock, similar to a large caramel, called “panela” was expensive and scarce before I left the country.

I realized that it is all about learning to live with less, to use wisely as much of the environment supply that Nature makes available for us, and a wise choice of location to take advantage of this.

What’s going on in the cities

As I am writing this, something sinister is cooking up there. Armed convicts are patrolling the streets. The doors of hell are open. However, in the capital city, Caracas, and in the poor barrios (and not so poor) of every major city there are gangs of armed, masked guys roaming the streets.

You won’t see this perhaps in YouTube or some dubious political trend such as Twitter (however there is a lot of on-site footage there, only in certain accounts) but it is happening, and it is getting worse. (Writer’s note: I started to write this a few weeks before the blackout.)

The desperation of the gang is increasing, and they are becoming more and more aggressive. This was to be expected. It is in their nature. To hold on to the power (whatever the concept they have of such word) by every means available…until they can’t do it any longer.

We waited too late.

Provided this worst case scenario (I’d rather prefer a pandemics, truly, instead of drugged, armed thugs in my front door) would happen, we took some containment actions. However, the scenario arrived too late, and the preps we had were not enough.

Bugging out with all of my gear would have been the less smart option…provided I could leave my job and come back later (very unlikely). The reason is simple. Every single item in any load we could have taken with us would have been “confiscated”. With or without property documents. This is a failed state, remember?

Because there is no rule of law, and nowhere to address your grievances either, you know?

Too risky, and too far away home. Perhaps a most logical choice would have been the mountains nearby our place…but building a bunker there, to go just the weekends was an open invitation for looting, and leaving our main home every single weekend was not an option neither, because monitoring thieves passing by could mark our home and break into.

It was not possible to make something concealed enough without the laborers and contractors opening their mouths and revealing the strange building so far away. Venezuelans are not exactly the most discreet people in the world. The only alternative would have been building something oneself, and for those of us who are challenged for that sort of stuff, it could result in a total disaster or risk of building failure.

For your potential retreat, location is key.

Given the recent events, with a nationwide power grid failure, and a catastrophic water supply system meltdown, added to a total communications blackout, I can say, with a proper amount of trust, location is key.

Those in the bigger cities, totally unprepared, paid the toll. Desperation, lack of medical attention for problems related to malnutrition and stress, personal safety diminished, all of this were and still are, the common denominator plaguing the people’s lives in the cities.

Being far away, using isolation as safety measures, could be safe enough just under the proper precautions, and banding with some other similar thinking families or groups, as neighbors.

I just confirmed with some close relatives that the location where my once so-called bug out place was not so severely punished by lack of pumping water. The water distribution system of the town nearby is gravity fed, people. The rural communities around have traditionally used rainwater collection tanks, having learned by years of irresponsible governments (way before Uncle Hugo, I have to acknowledge) that a water pipeline was not going to be installed anytime soon.

A note about water

Private water companies were almost non-existent because of the monopoly laws of the state over natural resources such as water. Basically, water belongs to everyone, and it was illegal for a company to take over it, even if you buy land with an underground stream. Companies just could charge the work of treating it, manage it, or bottled it or conduct it to the places where it would be needed. The needed permits to dig and install a water pipeline, though, are just the beginning of a long line of corruption. This was before Hugo, too.

One of the sources of the collapse of the actual water grid. And of course, the corruption and bribes behind the state controlling the water management facilities since their construction you could imagine what levels they reached and how long that line is.

In many places, the responsible team for the facility would shut down the treatment plant with any excuse, and they would receive bribes from the truck drivers, or owners of several tank trucks, to keep it like that for some time. Then the major would have to deviate “emergency” resources from the municipal (something like a county) funds to pay these trucks to deliver water to the communities.

This is a scheme that is not new at all. It has been there for decades. Those dumb enough to try to combat this, have been threatened…or worse.

Oh, and just add the military to the mix. Wonderful results.

You need a natural water source.

All of this has been described because the location of my retreat is near a natural water source. And it’s drinkable. No need to boil, just some gravity filtering as a precaution. My relatives did not need to fill their tanks there, because there is always a good reserve of filtered water at home, but if needed, they could have gone there.

It is far off the path, not many people go there.

The power is again operational in about half of the country.

The consumption of the region where my soon to be compound is located, is so low because there are no large industries, and the population density is so low too, that it won’t be a problem in the near future despite the nationwide failure. I say “soon to be” because now the joining of Venezuela to the NATO is almost a certain fact. This said we are going to need bunkers, just in case.

All major cities are suffering because of the high rate of per capita power (and water) consumption. It is clearly a collapse situation where those in power (politicians and legally or illegally armed forces) just take what they need, and the rest are left to rot in their own juices.

Of course, there is an entire setup of variables around the entire situation. This is nothing that can’t be fixed with a good amount of blood, sweat, and bullets. It is not the end of the world. Just the end of a terrible era for my country. Our preparations as a family were not enough for such terrible duration of the events that tore our country apart, and there was no way to prevent or foresee that.

What we expected was what happened.

Did we suspect that someday the colectivos would be roaming the streets, free and harming people? Yes, of course. They used to roam by the dozens whenever one of their thugs got shot, to drive him to the graveyard.

Did we suspect that food would be scarce and that power and water, soap and toothpaste would be a luxury item? Of course. We knew that the companies that once produced all kind of products had been seized systematically, in a fantasy of being “fighting against the evil empire”, only to make them unproductive so they could import everything and sell it in the black market with huge illegal, untraceable profits.

We knew that these thugs would not surrender and that they were going to kill one another after Chavez would die. They allowed violence to spread all over the country in levels that we never believed possible.

It could be possible to survive in a subdivision.

With a two stories house and a patio, we would have been incredibly much better prepared. In a tropical climate, 35 square meters can produce a LOT of food. Add some poultry for eggs, and you will have mayonnaise, and something to exchange for other items you need.

Being surrounded by several subdivision houses means that there was some degree of security. Constant rain in our area is another plus. Even in the dry season rains like there is no tomorrow. You should see the papayas in our front garden and the eggplants! Wonderful.

However, being in the middle of the city and close to some dubious barrios, an extremely low profile would have been a need. Sooner or later it was to be expected some kind of confrontation. I was not wrong: in our former city was the only place where someone shot back and killed a national guard. Go figure.

There are many variables

To summarize, there is an entire setup of variables that you have to address before selecting the location of your homestead. As the needs of everyone is different, the relative weight of such variables in our decision has to be addressed according to that.

Water, safety, accessibility, height over sea level, flooding tendency, hurricane belt, corn belt, rust belt, Bible belt, you need a matrix with all these variables in a row. As many as you believe is important. Make a spreadsheet with these in a horizontal line. In a vertical line, write the places you have selected. Based on your taste for every particular variable, assign to each place a number, from 1 to 100 perhaps or 1 to 10. Add this grading to the right end and you will have a totaling number useful for your selection purpose.

WOW! Look at the NWO’s CORONA meme on the cover of TIME magazine!