Two days ago, Washington Post headlined with “In America, talk turns to something unspoken for 150 years: Civil war.” (LMTOnline link to the Wapo story)

Where the heck have these people been? Independent Media has been documenting the rise of the violent left for years, warning that the nation was heading toward a full out civil war, with some of us believing we are already fighting it as the violent left has spilled blood of those they “disagree” with, and as the media rushes to justify their actions, but now we finally see the mainstream liberal media addressing the upcoming civil war.

Of course the liberal media is blaming President Trump for this, but those of us that were documenting the increasing violence against conservatives, by liberals and Black Lives Matter groups, during the Obama presidency, and the culture wars and gender nonsense, along with the attacks against Christian beliefs, and the constant class warfare preached by Obama himself as he categorically pushed racial divisions, knew this was coming long before President Trump came down the escalator and announced his candidacy.

Granted the actual violence has spiked since president Trump  won the election, but the bloody attacks have not come from Trump supporters, but rather by liberals and Antifa groups, against Trump supporters, with threats of violence, MAGAphobic (Thanks PJ Media!) physical attacks, and hundreds upon hundreds of documented examples of media approved violence and harassment against conserrvatives.

Trump Derangement Syndrome is real, although I think now the mental health experts are calling it “Trump Anxiety Disorder,” as infected liberal media journalists work hard to deliberately infect their liberal audiences to the point where just seeing a red (or white) hate that says “Make America Great Again,” is enough to incite them to violently attack the person wearing it.

In the minds of these deranged liberal media journalists and reporters, the hundreds of documented examples of liberals attacking and harassing men, women and even children for being conservative or supporting President Trump, all because they haven’t gotten over an election that happened over two years ago, is somehow President Trump’s fault, rather than acknowledging their own  constant incitement to violence by their own daily dose of manufactured outrage. 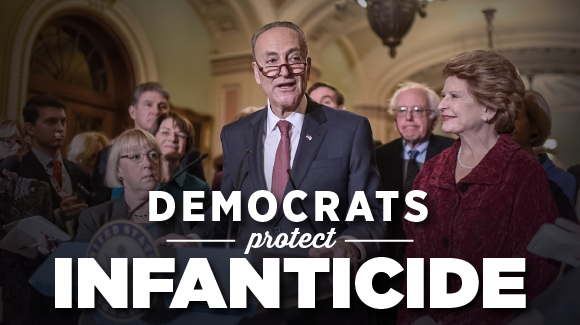 THE PARTY OF DARKNESS AND DEATH

The increasingly violent left is not the only part of the “war,” as we look at what the Democratic party as a whole has become. In the Senate, every Democrat except three, voted against a bill titled “Born-Alive Abortion Survivors Protection Act.”  The bill would “prohibit a health care practitioner from failing to exercise the proper degree of care in the case of a child who survives an abortion or attempted abortion.” If a baby survived an abortion attempt and was delivered, the bill would guarantee that child the same rights to medical care as anyone else.

Read the text of the bill. It should have been a no-brainer, the baby is alive, outside the mother’s womb, breathing, with a heartbeat, yet the Democrats blocked the bill that would require health professionals to give that baby care.

So when I say they are the party of death, I mean that literally. I used to separate Democrats into groups when I referenced them, moderate, far left and radical, but as I look at the news these days, almost all of them have become radical.

Anyone that thinks they do not want a civil war, is not paying attention.

Why do you think the liberals recently given control of the House of Representatives keep passing gun control bills, even knowing they won’t pass in the Republican controlled Senate, and won’t be signed by the President? Because they know that in an all-out civil war, conservatives, Second Amendment supporters, and veterans, would fight back, and most of them are armed, locked and loaded and more than ready to defend themselves.

A Maryland Sheriff, Mike Lewis of Wicomico County, has made it very clear to Maryland lawmakers that should they pass legislation regulating ownership of rifles and shotguns, his office “will not comply,” but he took it a step further and told them exactly what millions of law abiding gun owners have said, time and time again, to attempt to confiscate those weapon would be a “suicide mission.”

“The way the bill is written, it is impossible to comply,” Lewis said. “I can’t send (my deputies) on a suicide mission.”

Lewis has also been quoted as stating “Law-abiding citizens are repeatedly being penalized because of Baltimore City’s inability to control their crime. And I’m sorry — I’m not someone’s puppet. I’m going to stand up for what I think is unjust and unconstitutional to the American people, including those living in the state in Maryland.”

That is in a conservative area of a very liberal state, but our liberal DC politicians pushing for gun control understand quite clearly that there are hundreds if not thousands of Sheriffs just like Lewis that will be standing side by side with the millions of American gun owners,  if they try any large scale confiscation of weapons.

Yet they keep trying to pass more and more gun control bills and threatening to go further….. knowing if they succeed, it would lead to a blood bath of epic proportions.