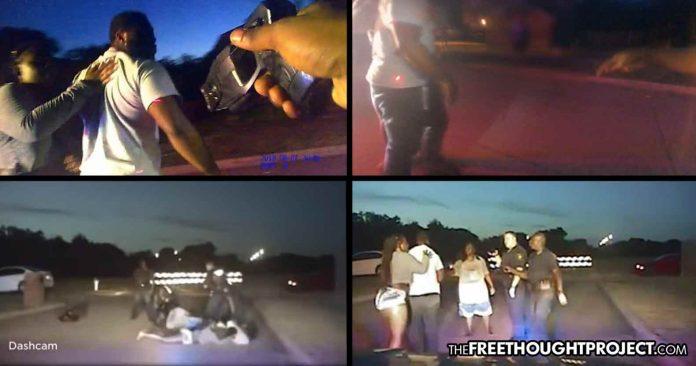 The body cameras of three officers went dark during their violent escalation with an innocent family, but dashcam footage showed it all.

DeSoto, TX — The incremental use of police officer body cameras over the last decade has proven to be both a huge asset to police accountability as well as a source of constant controversy. Many times, police departments will simply refuse to release potentially incriminating video, while other times, officers turn them off before committing a crime. As the following case illustrates, despite being required to film all their interactions, many cops will do the exact opposite when they are about to inflict violence on compliant individuals.

Last August, Sammie Anderson made the mistake of contacting the police to help break up an argument between her two sons. By the time police arrived, however, the argument was over. But this did not prevent the responding officers from escalating the situation.

When police responded, officers tackled Mrs. Anderson and then tasered one of her sons. The son who was tasered appeared to be entirely compliant with the orders given to him to lie on the ground. He was not a threat.

As the video shows, when police arrived, the scene was quiet and there was no disturbance. However, when officers Patrick Krekel, Bryan Scott-Lee, Courie Bryant, Kendall McGill, Ryan Money and Larry Walker arrived, the scene quickly descended into chaos.

When the officers got out of their cars, they held the family at gunpoint and demanded to know if they were fighting.

“No one’s fighting,’’ said Anderson’s third son, Sam, who walked up after just arriving from work.

Officers then yelled for everyone to get on the ground, to which Matt and his mother immediately complied. Sam is seen walking closer and that’s when Anderson gets up to warn her son to get down.

“Do as you’re told or you’re going to get Tased!’’ officer Scott-Lee said.

As Anderson began to get up once more, officer Krekel tackled the mother of three from behind and she was slammed into the street.

Just as Krekel is about to taser Anderson’s son, his camera conveniently shuts off.

Around the same time, Scott-Lee’s body camera points away from the violence and somehow stayed focused for three minutes on the house next door.

“Once you get here, we need to start hooking people up,’’ Scott-Lee said. “The males first. They’re all trying to fight each other.’’

A woman’s voice objected, saying, “No they were not, sir.’’

Although we cannot see the tasering take place on the body camera, dash camera captured the entire scene. We can also hear Grant scream for nearly a minute as he is repeatedly tasered for no reason.

“How do y’all Tase somebody f*cking 12 times, bro?’’ Grant can be heard asking on the footage.

Krekel said, “You got Tased twice.’’

“That was more than twice. What do you mean?’’

As the video below shows, Grant was in pain for far longer than two five-second bursts.

Officer Patrick Krekel also recorded himself talking about how he had “slammed’’ the mother of three to the street.

In total, three of the officers’ body cameras went dark during the incident. A subsequent investigation into the officers’ alleged misconduct found that their use of force was justified—despite the clearly missing evidence.

“It’s just unfair because it compromises our efforts to get at the truth,’’ Anderson said of the missing footage.

The Dallas News reports the family recently filed a claim against DeSoto alleging civil rights violations and seeking at least $1.5 million in damages for brutality and malicious prosecution. Anderson suffered a sprained shoulder and ankle, medical records show, and then lost her job due to absences that week. The family left DeSoto under threat of eviction.

HAVE WE BEEN LIED TO OUR ENTIRE LIFE? THIS TRUTH WILL SET US FREE W/ CHRISTOPHER JAMES (2 OF 2)

Conservatives must stop quitting before the battle is over! 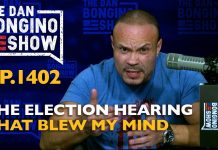 Ep. 1402 The Election Hearing That Blew My Mind – The Dan Bongino Show®