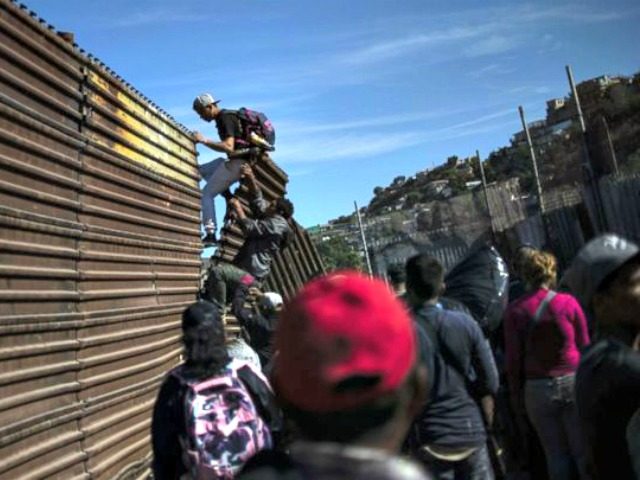 “At the secretary’s instruction, we are carrying out the President’s direction and ending FY 2017 and FY 2018 foreign assistance programs for the Northern Triangle. We will be engaging Congress as part of this process,” a State Department spokesperson said on Saturday.

Pompeo testified in the House on Wednesday about U.S. funding for programs to reduce migration.

The Washington Post estimated $500 million in 2018 funds would be affected by President Trump’s order, plus millions left over from the 2017 fiscal year. President Trump cited the same figure in his remarks to reporters on Friday night on his way to Florida:

I’m not playing games. I’ve ended payments to Guatemala, to Honduras and El Salvador. No more money is going there anymore. We were giving them $500 million. We were paying them tremendous amounts of money, and we’re not paying them anymore because they haven’t done a thing for us.

The Post said a debate over the aid program for the Northern Triangle, which “grew substantially under the Obama administration,” has been raging within the Trump administration for months. Those in favor of terminating the program argued that it was not achieving the anticipated results.

The abrupt end of the debate was said by the Washington Post to “take many people by surprise,” even though President Trump has publicly discussed the idea of ending the program. An anonymous “former U.S. official” said there was “chaos” in the State Department over the weekend as “officials tried to figure out whether they had to cancel existing contracts or simply not renew them.”

Trump’s most recent threats to cut off aid was in December when he said the Northern Triangle countries were “doing nothing for the United States but taking our money.” Reports last week indicated a new migrant caravan is forming in Honduras, possibly the largest one to date. Honduran officials disputed these reports.

Border Patrol officials have said they are overwhelmed by the number of migrants illegally crossing the border this year, forcing them to release thousands of illegal aliens who could not be held or returned to their home countries. The migrants have cannily exploited U.S. political arguments by bringing children with them, making detention and deportation much more problematic.

“We are beyond the breaking point,” U.S. Customs and Border Protection Deputy Commissioner Robert Perez said in an interview on Friday.

DHS Secretary Nielsen wrote a letter to Congress on Thursday warning of a “system-wide meltdown” caused by the flood of illegal aliens hitting the border. She asked for authority to return unaccompanied alien minors to family members in their home countries “if they have no legal right to stay” before adding:

We need additional temporary facilities as soon as possible in order to process arriving aliens, especially those entering illegally between ports of entry. We are witnessing the real-time dissolution of the immigration system.

Our men and women on the frontlines are simply not resourced to handle these levels, and I report to you today that we are struggling to transport and process – let alone adequately care for – this many individuals coming into our custody.

President Trump on Friday threatened to close “large sections of the border” next week in response to the crisis.

As the statement from the State Department indicated, Congress will be involved in making permanent cuts to foreign aid. Democrat leaders signaled on Saturday they would oppose President Trump on the issue.

Sen. Bob Menendez (D-NJ), the ranking Democrat on the Foreign Relations Committee, blasted Trump’s order to cut off payments to the Northern Triangle as an “irresponsible decision.” He said:

U.S. foreign assistance is not charity; it advances our strategic interests and funds initiatives that protect American citizens. This latest reported move shows the Administration still does not understand that the United States cuts foreign aid to Central America at our own peril.

Rep. Nita Lowey (D-NY), chair of the House Appropriations Committee, said Trump’s order is “immoral and more likely to deteriorate conditions that push people into the kind of poverty and despair that exacerbates migration.”