Trade is only one manifestation of much deeper economic insecurities and imbalances.

China’s enormous successes–raising hundreds of millions out of poverty, landing a rover on the dark side of the moon, etc.–are well known. Less appreciated is China’s increasing vulnerability to financial instability arising from asymmetries that cannot be resolved by tweaking trade policies.

As this article explains, The China Story That Is Far Bigger Than Apple, China’s trade balance–trade surpluses for decades– is close to slipping into trade deficits.

At the same time, China’s once-mighty pool of savings has diminished as consumption has risen. As a result, China now needs foreign investment more than it did in the previous era.

Chinese businesses have borrowed around $2 trillion in US dollar-denominated debt in the past few years, requiring the acquisition of dollars to service the debt.

So far this sounds like a typical case of a fast-growth economy maturing into a trade-deficit, debt-dependent consumption economy.

What the article misses the staggering rise in the cost of living in China over the past two decades. Some services are still dirt-cheap–subway fares are extremely cheap–and private healthcare is a mere fraction of healthcare costs in the U.S.

But other costs–housing, food, clothing, etc.–have shot up to the point that our on-the-ground correspondents report that living expenses aren’t much different than in the U.S.

Officially, inflation is low in China, but the reality is not so cheery: “Domestic sentiment is definitely very bad, perhaps even worse than during the 2008 global financial crisis,” said Fred Hu.

While white-collar wages are $13,000 annually, apartments in first and even second tier cities are similar in cost to desirable U.S. cities. Rent for a small flat is $800 USD in Shanghai, more than half the average salary, and typically cost hundreds of thousands of dollars to buy.

As I’ve noted before, roughly 3/4 of all household wealth in China is tied up in real estate, where it is effectively dead-money, earning no yield and largely illiquid outside of Beijing and Shanghai.

Reflecting a broad malaise, China’s stock market has dropped by 25% in 2018 while its currency weakened against the USD (by official design, of course).

One question no one is asking seems glaringly obvious: if everything is going great in China’s economy, why did President Xi feel compelled to declare himself president for life? Why is China rushing to install an Orwellian system of monitoring of behavior, online activity, etc., with heavy penalties for those who violate official norms?

Here’s another obvious question: what is it saying about China’s future prospects that those who know China best (i.e. insiders) are fleeing the yuan and moving their capital overseas?

We might also ask why critics of official policy are censored or even swept out of view. Are these the actions of a secure, confident ruling elite? The short answer is no, and some of that insecurity is undoubtedly the result of the increasingly fragile nature of China’s growth story.

Simply put, trade is only one manifestation of much deeper economic insecurities and imbalances. 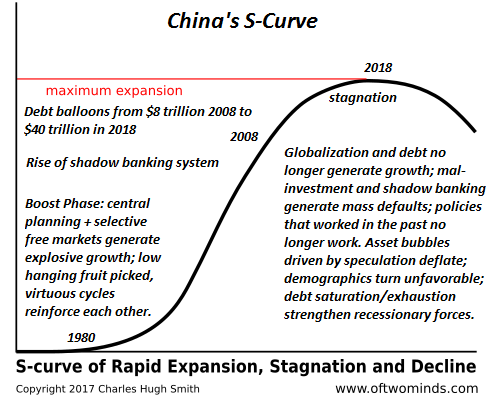