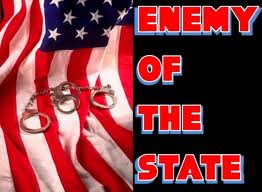 I have a simple “Common Sense” question. If FEMA camps were to be used against American citizens for political beliefs and actions, do you think this would happen BEFORE or AFTER a hostile takeover from a tyrannical force? The obvious “Common Sense” answer is AFTER the takeover.

Any compilation of an enemies of the state list must be considered to be “pre-genocidal” given the repeated events in world history. And yet, that is exactly what is happening.

This article will make the case that a hostile takeover is underway and there are distinct plans to deal with all patriots, Christians and conservatives.

An Enemy of the State List Is Being Constructed In Michigan

In all of my years living in America and possessing an understanding of the Constitution, I never thought I would see the following ever implemented within the United States. Between Dana Nessel and Representative “I hate Jews” Omar, the State of Michigan should change the name of their state to New Iran.

Michigan Attorney General Dana Nessel has announced plans to create a “hate crime” unit in order to track Michigan residents who disagree with the official government ideology, the Detroit News reports. The term “hate crime unit” is misleading, because the group’s purpose will not be solely to prosecute hate crimes, but also to create a database of people who do not submit…

Every move you make, every thought you make, the state of Michigan will be watching you. But Wait! It gets worse!

Nessel stated that she will surveil anyone listed on the SPLC’s hate group tracker, along with anyone else she deems to have committed a thought violation. It is important to understand that these are not convicted criminals or people who the state has reason to believe have committed or are planning to commit a crime. The new database is specifically designed to target law-abiding Americans. The SPLC list is simply a list of people with whom the SPLC disagrees. The government will investigate citizens based, not on their actions, but what their political opinions are.
The SPLC already decides what content can appear on YouTube, Twitter, and Facebook. Now, along with the Michigan government, it will decide who does and does not have First Amendment rights.

This is “pre-crime”! And if that is not bad enough, if the eye of Nessel falls upon you, “your communications, personal associations, and thoughts will all be documented and scrutinized.
The Michigan Civil Rights Director Arbulu also stated the following:

…said he wants “to be proactive and address issues before they rise to the level of a crime.” So, not only are they watching wrong-thinkers, they actually plan on intervening and somehow stamping out dissent. There is no mechanism by which the state can prosecute legal behavior, so it is unclear what exactly Arbulu plans on doing to the law-abiding citizens. He ominously warned Michiganders, “We are watching, and we won’t allow hate to divide us….”
…who will be on the list? The SPLC has over 1,000 listed groups, ranging from pro-White organizations to Christian groups listed because they support the biblical definition of marriage. The list consists of thousands of people, many of whom have views that are totally mainstream outside of the hyper-liberal echo chamber of government and…to that, the state reserves the right to add anyone it wishes to the list. Criticism of Israel, race realism, pro-White activism, and many other forms of expression could land you on the list….

…there appear to be no legal challenges to this clear infringement of rights….

A New Definition of the Term “Hate Crime”

Prior to the illegal actions of the Michigan state government, I had been commenting on how “hate speech” and the term “hate crime” were being used to repress 1st Amendment rights. I have also stated that these terms are thinly veiled, Gestapo-style attempts to stifle any dissent against radical ideology as well as create a future Enemies of the State list. In fact, just a few days ago and only one day before the public disclosure of this Michigan pre-genocidal program, I made this video which exemplified my objections to these illegal actions in Michigan.