Justin’s note: Nick Giambruno is the chief analyst of Casey Research’s flagship publication, The Casey Report. He’s a successful speculator, a true international man, and a contrarian. He’s also a clear thinker – and sees something big ahead.

Today, he shows why government overreach will cause the next financial crisis… explains his “the bigger the boom, the bigger the bust” theory… and how we’re headed for the biggest bust of all…

It was perhaps The Economist’s most bizarre issue to date…

In January 1988, the magazine published a feature article titled “Get Ready for a World Currency.”

The article called for countries to give up their monetary sovereignty in favor of a world central bank, which would issue a new global currency. It suggested the name “phoenix” for the currency.

The article recognized that most governments wouldn’t participate under normal circumstances. It claimed it would take a crisis.

The 31-year-old article concluded with a prediction:

Pencil in the phoenix for around 2018, and welcome it when it comes.

Now, 2018 has come and gone. But the prospect of a global financial crisis ushering in a world central bank and a new global currency is increasingly plausible.

As I’ll explain shortly, this is bad news for the U.S. dollar.

For months, I’ve been telling my readers that an epic market crash is very likely before the end of Trump’s first term…

That’s because the magnitude of a crisis is directly related to the amount of malinvestment getting flushed from the economy.

And right now, there is an unprecedented amount of malinvestment waiting to be flushed, thanks to seven years of 0% interest rates and the $3.7 trillion the Fed “printed” after the 2008 financial crisis.

When it pops, people will panic and demand that politicians do something.

This will be the perfect opportunity for the globalists to finalize their pet project: a global central bank that issues a global currency.

In that sense, The Economist’s 2018 prediction may end up close to the mark.

You see, The Economist’s global central bank and the phoenix currency were code names…

The IMF describes itself as an:

In short, the IMF is the quintessential globalist institution. Pretty much every country in the world is a member, save for Cuba, North Korea, and a few others.

The SDR, meanwhile, is simply a basket of other leading fiat currencies. The U.S. dollar currently makes up 42%, the euro 31%, the Chinese renminbi 11%, the Japanese yen 8%, and the British pound 8%.

For decades, the IMF has been using crises to build the SDR into a global currency…

In the past, the IMF hasn’t created SDRs at regular intervals. Instead, it’s created several increasingly larger tranches during or just after global financial crises. 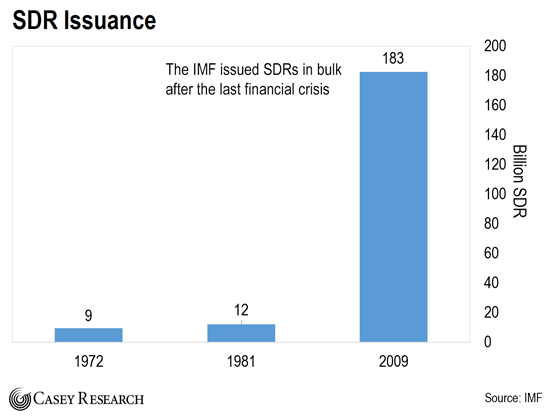 The IMF increased the supply of SDRs by almost 10 times in response to the 2008-2009 financial crisis. This was a huge incremental step towards establishing the IMF as a global central bank and the SDR as a global currency.

There’s a clear pattern here. No doubt, the IMF will use the next crisis – which promises to be even bigger than the last – to increase its prominence and that of the SDR.

Everything We Assume Is Permanent Is Actually Fragile