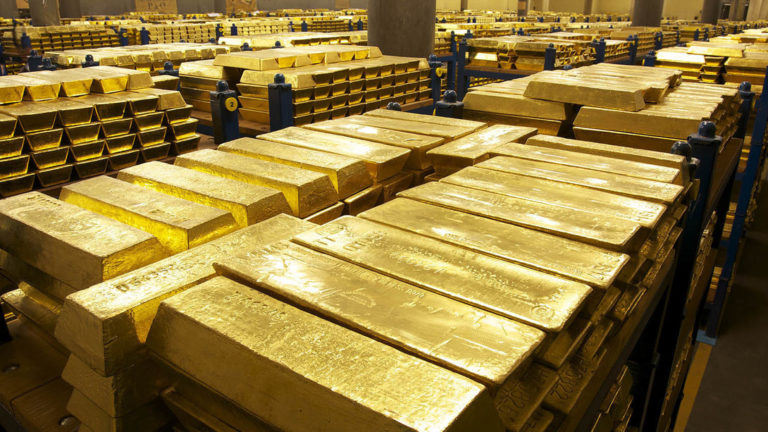 Hot on the heals of Hungary repatriating all of its gold reserves from London last October, moves are now afoot in neighboring Romania to do likewise, via a parliamentary bill submitted by Romanian politicians Liviu Dragnea and Serban Nicolae which specifies that only 5% of gold reserves can be kept abroad.

Romania’s strategic gold reserves amount to 103.7 tonnes and are managed by the country’s central bank, the National Bank of Romania (NBR), with over 60 tonnes of the Romanian gold (or about 60%) claimed to be stored at the controversial gold vaults of the Bank of England in London.

Given that Dragnea and Nicolae are not just anonymous back-bencher politicians submitting a Bill for attention seeking purposes, this gold repatriation initiative out of Romania is one to watch.

Indeed, Liviu Dragnea is leader of Romania’s largest political party, the Social Democratic Party (PSD), which is the senior party of Romania’s current ruling coalition. Dragnea is also President of Romania’s Chamber of Deputies (the lower house of parliament). Likewise, neither is Serban Nicolae a low-key figure as he is leader of the PSD grouping in Romania’s Senate (upper house of parliament). You could perhaps not find two more senior politicians than these two to kick start a gold repatriation campaign in Romania.

According to NBR’s 2017 annual report (the latest report available), just over 59% of Romania’s 103.7 tonnes of gold is held at the Bank of England in London, in what it terms “Gold deposits abroad”. Another 27% of the Romanian gold is still held in the NBR’s Bucharest vaults in what it calls “Bullion in Standard Form“, with the remaining 14% in the form of “Gold Coins”, which are also stored in the NBR’s vaults in Bucharest.

While “gold deposits abroad” sounds very much like “gold on deposit with bullion banks (i.e. gold lending)”, the Romanian central bank says in its 2017 annual accounts that in 2017 it did not derive any income on these gold deposits, however, it did incur a storage expense of 309,000 lei. Note: the ‘Leu’ is the national currency of Romania, with ‘lei’ being the plural for ‘leu’. Also note that the international currency code for ‘leu’ is ‘RON’.

According to the Bank of England Museum, the Bank of England charges 3.5 pence (or £0.035) in storage costs per gold bar, per night. Doing a rough calculation using the figure of 60 tonnes, with 80 Good Delivery bars in a tonne, that would roughly be equal to 4,800 gold bars that Romania has in custody storage in London. At 3.5 pence per bar per night storage, that would be £61,360 pounds of annual storage costs. At at average GBP/RON exchange rate of 5.13 in 2017, that would be 314,500 lei. Therefore, we can say that this 309,000 lei storage expense in the 2017 NBR accounts is pretty accurate and refers to the annual storage charge for about 60 tonnes stored in London at the Bank of England.

Given that there is a storage charge, this means that the Romanian gold in London is allocated, in other words, it is stored on a ‘set-aside’ basis, a.k.a.  ‘on an earmarked basis’. This means that the Bank of England knows all the serial numbers Romania’s gold bars. This also means that the first thing Dragnea and Nicolae should do is to demand a full and proper gold bar weight list from the Romanian central bank and from the Bank of England, complete with the refiner serial number of every single gold bar that Romania has stored in London. This full and proper weight list, which Dragnea and Nicolae should also then publish, will prevent any of the gold bars going missing, and in any event will also be needed for a gold bar repatriation transport operation back to Bucharest.

The Romanian Parliamenty Bill to bring back the gold

Dragnea and Nicolae registered their parliamentary Bill on 27th February, to be initially debated in the Senate under urgent procedure. The title of the Bill is “A legislative proposal for amending and completing the Law no. 312 / 2004 on the Statute of the National Bank of Romania”, and the submission and accompanying documents can be seen on the Romanian Senate website here.

Cleverly, what Dragnea and Nicolae are aiming to do is to amend the reserve management clause of the central bank’s statue to include language that  prevents more than 5% of the Romanian gold abroad. Such an amendment would then trigger the need to repatriate back to Romania, most of the gold stored in London.

Accompanying their draft bill submission, Dragnea and Nicolae include a one page ‘explanatory motive‘ document in which they explain the background and motivation for the move. They state that since the Romanian economy now has sustainable growth, a stable currency, and is not at risk of any crisis, that there is no need to keep the gold abroad. They write that:

“Therefore the NBR’s policy on the management of gold deposits held in the treasury or abroad as part of the operation the gold and foreign exchange reserves, can be modified.

From the information currently held, the gold reserve set up by the NBR according to the legal provisions is about 65% abroad.

For this amount of gold, the NBR no longer derives any income (specific to special trading operations, including the provision of guarantees), but on the contrary, pays storage costs.

Nothing in Romania’s economic situation can justify keeping such a gold reserve abroad, with its related costs, provided that this gold reserve can be properly maintained and supplemented in deposits in the country.

Possession of gold in deposits made abroad should not, necessarily, be prohibited, but it should be limited in quantity and conditional upon obtaining income through trading and other specific operations.

Accordingly, the application of such a regulation implies the need to remove the term “international” from the phrase “international reserves”in Chapter VII Gold and Foreign Assets Operations in Law no. 312/2004 on the Statute of the National Bank.”

Note interestingly that Dragnea and Nicolae now think that 65% of Romania’s gold is held abroad and not the 60% quoted in many recent news reports on the topic, such as a report from Bloomberg here. At 65%, that would mean that 67.5 tonnes of Romania’s 1037 tonnes of gold is now at the Bank of England, which is roughly 5,400 Good Delivery gold bars.

Specifically, what the Dragnea – Nicolae draft bill aims to do is to amend Article 30 (in Chapter VII Gold and Foreign Assets Operations), of the existing version of “Law No. 312 / 2004 on the Statute of the National Bank of Romania” by inserting a clause 4 into Article 30 as follows:

The Bill also seeks to delete a specific reference to the central bank in the definition of what constitutes a gold reserve, changing the current wording from:

a) gold holdings with the National Bank of Romania or deposited abroad;

a) gold held in the treasury in the country or deposited abroad;

Apart from the official submissions to the Senate, Nicloae explained in simpler terms as to why Romania should not keep its gold reserves abroad:

“You keep your jewels at home, you do not keep them in your neighbours’ house, nor do you pay rent to keep your jewels in neighbours’ house. I think we are in the situation in which Romania can afford to keep its gold reserve in its own territory, safely, to pay no rent for such a thing, and the National Bank of Romania may use this gold reserve, where appropriate, to undertake specific financial operations”.

Central Bankers on the Back-foot

Meanwhile, in typical smoke-and-mirrors central banker fashion, Romania’s long reigning central bank governor, Mugur Isarescu, reacted to the Dragnea and Nicolae gold repatriation initiative with a misleading and factually incorrect set of excuses as to why the gold should stay where it is in London. Isarescu has been governor of the Romanian central bank for nearly 30 years, except for a one year stint when he was prime minister of Romania from 1999 to 2000, so was presiding over the NBR when the gold first moved out from Romania to London between 1999 and 2002. Said Isarescu:

“I have been accused that I keep the reserves abroad. As if I am the one to keep them, as if they were mine. Where do you want us to keep them? These are international reserves; do you think the euros and the dollars are kept in the NBR basement? They are kept in reserves.”

There are a number of errors in Isarescu’s statement. Firstly, physical gold cannot be compared to the electronic records of fiat reserve currencies such as euros and dollars which exist in a virtual accounting system. Physical gold is tangible and can be stored anywhere, and Isarescu knows it.

Secondly, the Romanian central bank already keeps gold in its basement, nearly 40 tonnes of the stuff, in the form of ‘Bullion in Standard Form” and ‘Gold Coins”. Isarescu knows this too but conveniently failed to say this. Isarescu also knows that many central banks keep their gold in their own basements, for example, the Germans, the Dutch, the Austrians, the Russians, the Chinese, etc etc. But he would seemingly rather keep the gold in the basement of the Bank of England.