The explanation for the sudden halt in global economic growth is found in the coincidence of peak credit combining with trade protectionism. The history of economic downturns points to a rerun of the 1929-32 period, but with fiat currencies substituted for a gold standard. Government finances are in far worse shape today, and markets have yet to appreciate the consequences of just a moderate contraction in global trade. Between new issues and liquidation by foreigners, domestic buyers will need to absorb $2 trillion of US Treasuries in the coming year, so QE is bound to return with a vengeance, the last hurrah for fiat currencies. However, China and Russia have the means to escape this fate, assuming they have the gumption to do so.

It may be too early to say the world is entering a significant economic downturn, but even ardent bulls must admit to it as an increasing possibility. Financial analysts, both bovine and ursine, face a complex matrix of factors when judging the future effect of any downturn on currencies, and of the prospects for the dollar in particular.

Some will take the view that a global downturn will continue to drive foreign currencies to be sold for dollars, because dollars are perceived to be less risky and required to repay debt. Some will point to the tension in the euro from the extra twist an economic downturn gives to the debt crisis forced on Italy and the other three PIGS, compared with the relative stability of the Hanseatic nations. Some analysts will expect China to get her come-uppance when her debt-fuelled economy implodes into crisis.

As a recession progresses, it is conventional to think of the dollar as a safe-haven. For a brief time, relative to other currencies this might be true. But what then?

Those that succeed in their analysis beyond the short-term will do so by discarding all bias. They could then observe that in the event an economic downturn gathers pace a split could emerge in relative outcomes between East and West. The effect of a downturn on the Asian bloc, led by China, Russia and now joined by India, is likely to differ from the effect on America and Europe. It is the new versus the old, Asian mercantile states that provide minimal welfare, differing from the more mature welfare-heavy nations.

When we consider these two groups, we tend to analyse the situation through the lens of our own prejudices. Remove this predisposition, and it should become clear that whatever the starting point in terms of debt to GDP and other metrics, the prospects for welfare-light nations are considerably better in a global economic downturn than they are for nations burdened by extensive welfare obligations. China and other Asian states will not face the same degree of debt escalation as America, Japan, the UK and the European nations. Furthermore, Asia has far more dynamic economies with the potential for a continuing industrial revolution.

Government finances will be central to outcomes. Given that all government finances deteriorate during economic downturns, the starting point and the pace of debt escalation are what should concern us. China’s overall debt to GDP ratio at approximately 260% compares with that of the US which is around 360%, so on that score China’s total debt is significantly less. The US Government’s debt to GDP stands at over 100%, while China’s is estimated to be under 45%. Yet, Western analysts perceive China to be in a weaker debt position than the US.

America’s principal strength, which everyone cites, is the reserve role of her currency. Everyone needs dollars. All countries without sophisticated financial markets in their own currencies borrow in dollars, which must eventually be repaid. Everything from commodity prices to global financial markets is referenced in dollars. The dollar has also become weaponised, the means of enforcing America’s foreign policy. It is the King Rat of the currency world.

So long as the world enjoys continual economic growth, the dollar is difficult to challenge. When the economic tide turns, everything becomes different. In this article I explain why the global economy is heading for a crisis which could be similar in scale to the great depression. If this analysis is correct, then the dollar’s prospects as the global reserve currency, even its continuing existence, will be threatened and must be reassessed in that light.

In a previous article I pointed out the catastrophic danger of combining trade protectionism with the top of the credit cycle. This combination was devastating when the Smoot-Hawley Tariff Act was passed by Congress in October 1929, particularly when compared with the relatively minor consequences of the Fordney-McCumber tariffs of 1922. The difference was Fordney-McCumber was introduced early in the credit cycle, and Smoot-Hawley at its peak. This dissimilarity was the principal driver behind the viciousness of the Wall Street crash and the subsequent global depression.

We have a situation today so similar to Smoot-Hawley and its coincidence with the top of the credit cycle in 1929 that we should be deeply concerned. What is particularly alarming is that international trade appears to have already stopped expanding, almost as if it has run into a brick wall. A comparison with the 1929 experience suggests this result as extremely likely. That precedent warns us today’s international trade may be rapidly sliding from expansion into severe contraction, with dire consequences for the whole global economy. Smoot-Hawley and the top of the credit cycle in 1929 combined into the motive force that made the great depression unnecessarily deep, global and intractable.

The impact on government debt funding will be immense

The question then arises as to how a top-of-the-credit-cycle event combined with an escalation of trade protectionism will impact the US economy today, particularly with regard to funding an increasing budget deficit when Americans have become used to foreigners buying the bulk of new Treasury bonds.

To appreciate the full implications, we must revisit the connection between trade and budget deficits under the recessionary assumption that the budget deficit will rise, while trade volumes contract. But before examining the consequences, we must set the scene by explaining why and how the twin deficits are linked. The easiest way to do so is to imagine a world of sound money, where the total of money and credit is fixed and the preference for holding money relative to goods does not alter.

If the quantity of money and credit is constant, all imports must be paid for by exports. In other words, trade imbalances cannot arise if there are no changes in the total of circulating money. If credit is extended to an importer, it must be sourced from savers prepared to defer their spending, instead of being created out of thin air, as is the case with fractional reserve banking. At the same time, the government can only finance its spending by raising taxes and borrowing from private individuals. The banking system in our sound-money example can only act as intermediaries and cannot increase the quantity of money or credit to pay for government spending, nor can it expand credit to finance trade.

Therefore, the sound money condition that makes a trade imbalance impossible is the same one that makes a budget deficit impossible. It follows from this that if the quantities of money and credit are allowed to expand, imbalances develop for trade or government budgets, or both. One deficit does not have to lead to the other, but to the extent it does not, then the difference must be reflected in a change in the savings rate. Savings must be spent in order to increase the consumption that leads to trade deficits. Alternatively, they must be invested, or spending deferred, in order to reduce them.

If a government spends more than it receives in taxes and the resulting budget deficit is not reflected in a similar deficit on the balance of trade, it is because individuals defer their spending and increase their savings by buying government bonds. Their spending on consumer items thereby becomes curtailed, restricting demand for imported consumer goods. Obviously, there are other investment media, such as corporate bonds and new issues which attract savings, which is why the twin deficits will never be exactly equal. But generally, if there is no change in the savings rate, both trade and budget deficits will approximate with each other.

In today’s world of fiat currencies, a budget deficit still has to be financed in the absence of an increase in savings. The two sources of non-saver finance are the purchase of government debt by the banking system and the reinvestment of surplus dollars accumulating in foreign hands, mainly as a result of the trade deficit. So long as foreigners are willing to reinvest their dollar surpluses instead of selling them, the twin deficits are not destabilising. The trouble comes when that condition ceases, which is most likely to happen when the credit cycle turns, and tariffs are imposed or threatened.

Furthermore, government finances deteriorate rapidly when an economic slump develops. Table 1 below is an idealised illustration of how the government funding requirement increases during a relatively minor recession, due to a changing combination of the twin deficits. Our starting point is the US fiscal year to October just ended. 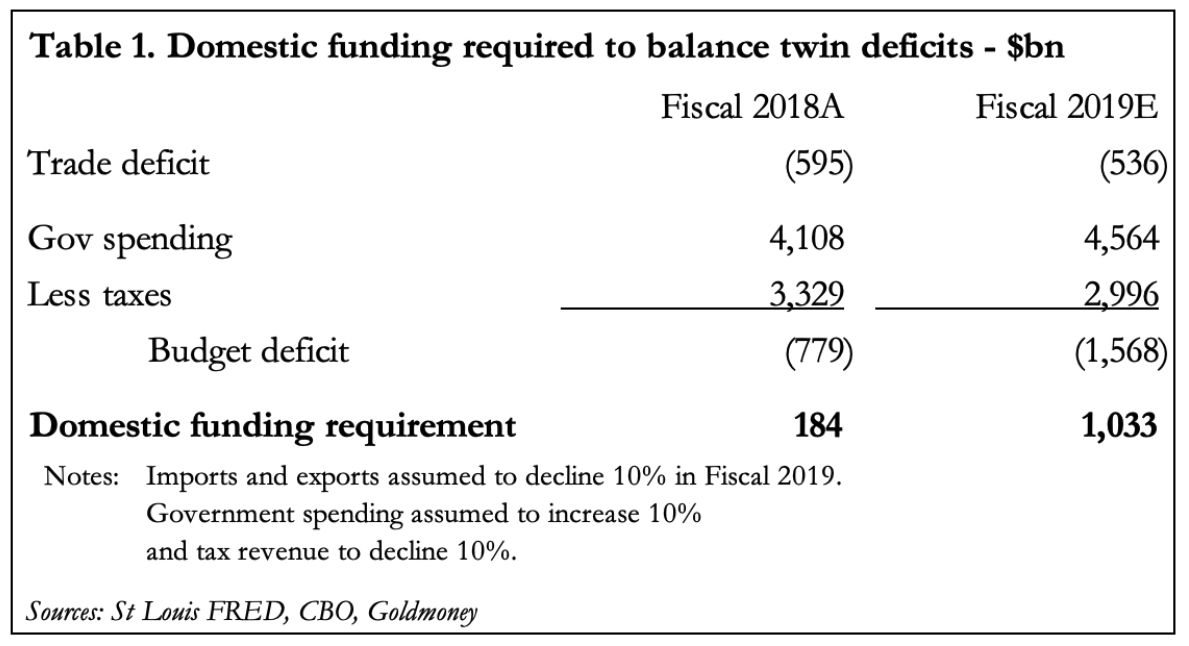 US residents and banks would only have had to find $184bn in Fiscal 2018 to fill the Federal Government’s funding gap. This is the domestic funding requirement. Assuming the changes listed in the notes to Table 1 apply to fiscal 2019, the domestic funding requirement rises to over a trillion dollars, an increase of more than fivefold. Crucially, this assumes capital surpluses accumulating in foreign hands from the US’s trade deficit are fully recycled into Treasury bonds.

An escalation of domestic funding requirements will be repeated in all other countries that habitually run trade deficits and face rising welfare obligations. These dynamics are certainly not factored into market expectations, because bond yields have yet to reflect the increase in supply, and the price of gold has not suggested the inflationary implications of the quantitative easing certain to be reintroduced in all the advanced economies.

Returning to our analysis of the US position, the increase in the domestic funding requirement implies capital imports would have to rise sharply even in a moderate recession if a funding crisis is to be avoided. That is unlikely to happen.

Assuming that global trade is beginning to contract as our thesis suggests, it is more likely foreigners will be repatriating funds into their own currencies instead of investing them in dollars. Earlier bullish assumptions by foreign corporations about trade expansion will inevitably lead to a downwards reassessment of their dollar requirements. Rising budget deficits and the emergence of malinvestments in their own jurisdictions will require funding as well. The potential for a government funding crisis to go global is very real. 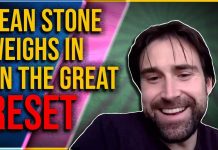