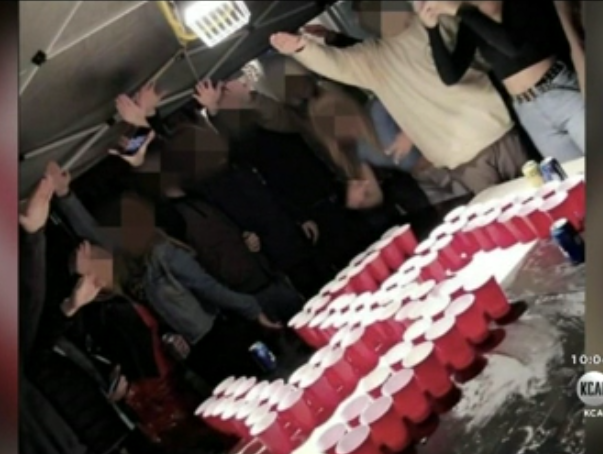 “Kids want to do things their parents don’t approve of … They want to test the boundaries of propriety, blaze their own paths, leave their own imprint on the world … (They) are not interested in conforming to the Cultural Marxist (anti-racist) values of the 1960’s. Those are yesteryear’s values. … To be frank, those values have failed us as a nation.”

Last week some kids in southern California were caught playing beer pong with their cups assembled in the classic Swastika formation. Very dangerous stuff, people. Kids arranging their beer pong cups into the wrong shapes is scary, scary stuff, and can not be tolerated; it must not be tolerated. It’s basically another Holocaust. One lady I encountered on Twitter a few days back actually recommended having child protective services visit the parents of these young pong-playing rascals to investigate them for child abuse. Oh yeah, people, we are that close to Sovietesque dystopia, if we’re not there already.

Someone should explain to this Neo-Bolshevik psychopath that all the scientific literature suggests children are not mere vessels into which their parents’ values (or “culture” for that matter) are thrown. In fact, a child’s peers are far more influential in shaping their opinions than are their parents. This, by the way, is an adaptive trait/phenomenon. You see, you need to learn how to navigate the social milieu you find yourself in, not the social milieu of two or three decades past! So, if anyone is responsible for these chilling (pun intended) cup formations, it is not the parents of these kids, but their peers, in particular youth-driven movements like the Alt-Right!

I know what is going on with high school and middle school kids these days. The power structure may hate the Alt-Right, but it is the counter-culture. We own the web. We are the vanguard of the right. We are the fount of radical and dangerous and ancient ideas, and the young’uns know it. That is why every neologism my teenage stepson utters has its origins in Alt-Right-dominated internet forums like 4chan. When he first started using some of those words, I was flabbergasted, taken aback. However, it has happened enough times now that I’m basically used to it. It actually makes sense when you think about it.

Kids want to do things their parents don’t approve of (in his case, his stepdad approves, but then I’m an odd case). They want to test the boundaries of propriety. They want to blaze their own paths, be their own selves, live their own lives, leave their own imprint on the world. Profound insight, I know.

Youth are not interested in conforming to the Cultural Marxist (anti-racist) values of the 1960’s. Those are yesteryear’s values. They are stale and oversimplistic. To be frank, those values have failed us as a nation. The Alt-Right, on the other hand, is edgy and exciting. Even the kids who don’t adopt the its worldview are being influenced by our ideas, by our terms, by our courage, by our memes, by our creativity. They are steeped in a counter-culture the Alt-Right created, whether they like it or not, whether they know it or not.

It is not teenagers doing provocative and rebellious things that is scary. That is normal and healthy. It is America’s response that is scary. It is the fact these kids are likely to be suspended from school for an irreverent joke, for expressive conduct done on their own time, far from school — now that is scary. It is as if our Cultural Marxist overlords know how fragile the system is right now, and fear that any act of disobedience, no matter how trivial, might bring it all crashing down.

After all, why is this national news? How can anyone consider America a serious or free country at this point, when kids can’t even be kids and engage in youthful rebellion, without being shamed and slandered nationally? Yet the boomertards and their pet minorities are still the only ones who seem to have any representation at all in the American press and power structure. What renders their histrionics so incredibly silly is that no one under the age of thirty is listening to them. No one cares. It is all so tiresome at this point. Boomers and non-whites have taken on the role of Western society’s children, throwing tantrums whenever others don’t give them their way.

In fact, that is what these kids are responding to and revolting against, namely the [over]reaction we all observed in the aftermath of this largely innocent beer pong game. These kids don’t care to be bullied over words, or shapes, or lectured to about microaggressions, or conditioned into thinking the supposed right things about historical events. They don’t like the social justice left, with its never-ending list of rules for everyday speech and conduct, or the lying press, which labors inexorably to legitimize the social justice left’s impressive array of imaginary grievances. The political left’s totalitarian drive to control everything is oppressive, and intolerable, and wrong. Just listening to these sanctimonious blowhards carry on about how dangerous certain beer pong formations can be, is just too much for any reasonable person to bear.

These kids want liberty and choice and speech and merriment and laughter and beer! So they are dissenting, rebelling, standing up, speaking out, as kids are supposed to. They are refusing to comply with the odious mandates of illegitimate authority, and that is a good thing; it should be encouraged. It shows that the human spirit is alive and well in America’s youth, especially our white youth. These kids are saying “Back Off!” in the boldest and most emphatic way possible, to the bankster oligarchs and globohomo tyrants that run the modern West. And good, good, good on them. Noble acts of resistance to tyranny should be lauded by all decent people. Even mere symbolic acts of defiance are preferable to a life on one’s knees. What I see is an old guard dying and a new generation springing to life, and it is beautiful to behold. It really is.