In a massive leap forward protecting the rights of citizens to own guns, the Missouri state Senate passed a revolutionary law banning all federal gun control laws from ever being enforced.

Missouri — As politicians and anti-gun rights activists continuously chant, “we don’t want to take your guns,” behind the scenes — in only a year — politicians have been working overtime to limit your right to bear arms. These laws are all a reaction to the tragic shooting in Parkland, Florida last year and, like most politicians always do, they are not letting this tragedy go to waste. Luckily, however, states like Missouri are moving to protect their residents from laws like these by passing legislation to ban gun control laws.

As the Sentinel reports, Missouri may have just made the most monumental step towards freedom and individual liberty since the signing of the Bill of Rights. In a 23-10 vote by Missouri’s state senate, the state passed a bill that would nullify ALL Federal gun laws and regulations, and make enforcement of those laws by federal officers within the State of Missouri a criminal offense.

Like it’s predecessor, SB613, Bill SB367 and it’s companion, House Bill HB786, would prevent all state agencies and their employees from enforcing any federal law that infringes the Second Amendment in any way, including gun registrations, fees, fines, licenses and bans. Originally authored in 2014, a former version of the bill was also passed, but vetoed by then Missouri Governor Jay Nixon.

The pro-2nd Amendment legislation leaves no room for error and blatantly refuses to abide by “all federal acts” which set out to stifle an individual’s ability to defend themselves.

According to the Sentinel, cops were not very happy with the passage of this bill as Missouri law enforcement officials raked in $34,462,153 in forfeitures from 2001 to 2008, according to a report by the Institute of Justice.

The bill is so pro-gun that even the NRA opposed it and attempted to insert language that would require gun owners to report a stolen firearm to police no more than 72 hours after the discovery of the theft, or face a $1,000 fine and a misdemeanor charge. However, they were unsuccessful and the bill is now moving to the House.

The reason bills like this are so necessary is because laws across the country are being passed en masse to limit your right to self defense. Since the tragic shooting in Florida in February 2018, the Giffords Law Center to Prevent Gun Violence has recorded a whopping 55 new gun control measures in 26 states—in just the first six months of the year.

Some of these laws being passed are ‘Red Flag’ laws which are used to disarm individuals who are reported as a threat by a family member or friend. Many believe that these red flag laws are dangerous as they can prompt police action with little to no due process.

As a recent report out of FOX32, points out, nine states have passed laws over the past year allowing police or household members to seek court orders requiring people deemed threatening to temporarily surrender their guns, bringing the total to 14. Several more are likely to follow in the months ahead.

To show how willing these states are to use these laws, an unprecedented 1,700 orders to seize guns were issued in 2018, likely resulting in the confiscation of thousands of guns. What’s more is the fact that this number is likely far greater because there is no requirement to report these numbers and this data doesn’t include California who has recently implemented some of the most draconian gun laws in the country.

To those who may be in favor of such laws, consider the following: There is no way to stop an estranged spouse from calling police repeatedly and telling them their ex is threatening to cause harm to others.

Anyone, any time, now has the ability to claim someone else is a threat and have police take their guns. One does not need to delve into the multiple ‘what if’ scenarios to see what sort of ominous implications arise from such a practice. Luckily, some states have put in checks that require further investigation before police go in to take someone’s guns.

Although it is not perfect, an example of one of these red flag laws with a system of checks is in Illinois. Gov. Bruce Rauner signed laws last year authorizing judges to take weapons away from people facing problems that make them dangerous to themselves or others. However, the person making the claim has 14 days to produce “clear and convincing” evidence that the person in question is potentially dangerous and should have weapons taken from him or her for up to six months.

Although the ostensible intention of these recently passed laws is to stop a future tragedy, it is important to point out that there were already laws on the books that should’ve stopped Nikolas Cruz from ever getting a gun. But the none of them worked.

Citing Cruz as the reason for advocating the erosion of the 2nd Amendment, the anti-gun activists are claiming he should’ve had his guns taken which would have prevented the tragedy. Sadly, however, they are ignoring the fact that he was accused of multiple felonies—and should’ve never been able to purchase a gun in the first place—but law enforcement failed to act on any of it.

Also, in California as TFTP reported in January, taking someone’s guns away does not prevent that person from illegally obtaining another firearm and using it to commit murder.

In January, a tragedy unfolded in California as a deranged gunman, Kevin Douglas Limbaugh, walked up on an innocent woman, officer Natalie Corona, pulled out his guns and began shooting her repeatedly until she died. Limbaugh then fired several more shots at others before turning the gun on himself and taking his own life.

Limbaugh obtained the gun illegally because police had already taken his legal ones.

According to police, Limbaugh’s guns were confiscated last year likely related to the red flag law. In September, Limbaugh was charged with a felony count of battery with serious bodily injury. That charge stemmed from Limbaugh punching a co-worker, Gilbert Duane McCreath, while the two worked at the casino the night of Sept. 20, according to the Sacramento Bee. 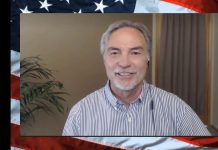 John Rubino – Mass Layoffs Coming One Way or Another

BOBULSKINI WILL APPEAR FOR FULL HOUR ON TUCKER CARLSON