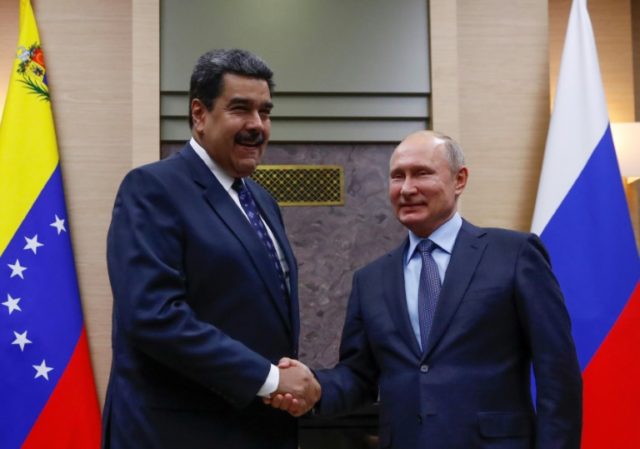 Caracas (AFP) – A cargo plane bearing the Russian flag was spotted by AFP at the main airport in Venezuela Sunday amid reports that Moscow has dispatched troops and a senior military official to the country.

The aircraft was seen at Maiquetia airport outside Caracas guarded by a contingent of Venezuelan National Guardsmen.

Javier Mayorca, an independent journalist, reported on his Twitter account the arrival of two Russian panes — an Antonov-124 cargo plane and a smaller jet — late Saturday at the airport.

He said around 100 Russian soldiers led by General Vasily Tonkoshkurov, head of the Mobilization Directorate of Russia’s armed forces, disembarked along with about 35 tons of equipment.

A picture of a Russian flagged aircraft posted on social media showed men in uniform clustered around it on the tarmac.

There was no confirmation from Venezuelan authorities, and the Russian embassy in Caracas declined to comment to AFP on the report, which was widely carried by Venezuelan media.

Russia and China are the main allies of Venezuela. Both have lent billions of dollars to the oil-rich South American country, propping up the anti-US government of President Nicolas Maduro.

Russia has also vocally opposed US moves to sanction Maduro and his government, and to recognize opposition leader Juan Guaido as Venezuela’s interim president.

US moves against Caracas have ratcheted up in recent weeks, with President Donald Trump warning “all options” — implicitly including US military intervention — were being considered.

On April 28, US sanctions are to jump up a level with a ban on crude imports from Venezuela. America is historically Venezuela’s biggest oil buyer, and that step is expected to severely crimp the Maduro government’s already diminished finances.

Russia has previously signalled its support for Maduro by sending two TU-160 bombers to Venezuela last December to take part in a military exercise.