EVERY MAJOR U.S. WAR of the last several decades has begun the same way: the U.S. Government fabricates an inflammatory, emotionally provocative lie which large U.S. media outlets uncritically treat as truth while refusing at air questioning or dissent, thus inflaming primal anger against the country the U.S. wants to attack. That’s how we got the Vietnam War (North Vietnam attacks U.S. ships in the Gulf of Tonkin); the Gulf War (Saddam ripped babies from incubators); and, of course, the war in Iraq (Saddam had WMDs and formed an alliance with Al Qaeda)

This was exactly the tactic used on February 23, when the narrative shifted radically in favor of those U.S. officials who want regime change operations in Venezuela. That’s because images were broadcast all over the world of trucks carrying humanitarian aid burning in Colombia on the Venezuela border. U.S. officials who have been agitating for a regime change war in Venezuela – Marco Rubio, John Bolton, Mike Pompeo, the head of USAid Mark Green – used Twitter to spread classic Fake News: they vehemently stated that the trucks were set on fire, on purpose, by President Nicolas Maduro’s forces.

Each of the trucks burned by Maduro carried 20 tons of food & medicine. This is a crime & if international law means anything he must pay a high price for this. #23FAyudaHumanitariahttps://t.co/IrGzrOUX09

Masked thugs, civilians killed by live rounds, and the burning of trucks carrying badly-needed food and medicine. This has been Maduro’s response to peaceful efforts to help Venezuelans. Countries that still recognize Maduro should take note of what they are endorsing. pic.twitter.com/KlSebd2M5a

.@SecPompeo: We denounce Maduro’s refusal to let humanitarian assistance reach #Venezuela. What kind of a sick tyrant stops food from getting to hungry people? The images of burning trucks filled with aid are sickening. https://t.co/zzFNYVly2c

#Maduro ordering the firing on and burning of trucks filled with
humanitarian aid & attacking volunteers is unconscionable. I condemn the killings & human rights abuses committed by Maduro. Violent attacks against life-saving aid for #Venezuela is despicable. #EstamosUnidosVE https://t.co/BOSuVP1mTL

As it always does – as it always has done from its inception when Wolf Blitzer embedded with U.S. troops – CNN led the way in not just spreading these government lies but independently purporting to vouch for their truth. On February 24, CNN told the world what we all now know is an absolute lie:  that “a CNN team saw incendiary devices from police on the Venezuelan side of the border ignite the trucks,” though it generously added that “the network’s journalists are unsure if the trucks were burned on purpose.”

Other media outlets endorsed the lie while at least avoiding what CNN did by personally vouching for it. “Humanitarian aid destined for Venezuela was set on fire, seemingly by troops loyal to Mr Maduro,” The Telegraph claimed. The BBC uncritically printed: “There have also been reports of several aid trucks being burned – something Mr Guaidó said was a violation of the Geneva Convention.”

That lie – supported by incredibly powerful video images – changed everything. Ever since, that Maduro burned trucks filled with humanitarian aid was repeated over and over as proven fact on U.S. news outlets. Immediately after it was claimed, politicians who had been silent on the issue of Venezuela or even reluctant to support regime change began issuing statements now supportive of it. U.S. news stars and think tank luminaries who lack even a single critical brain cell when it comes to war-provoking claims from U.S. officials took a leading role in beating the war drums without spending even a single second to ask whether what they were being told were true:

This is just evil https://t.co/kDOJBZ48td 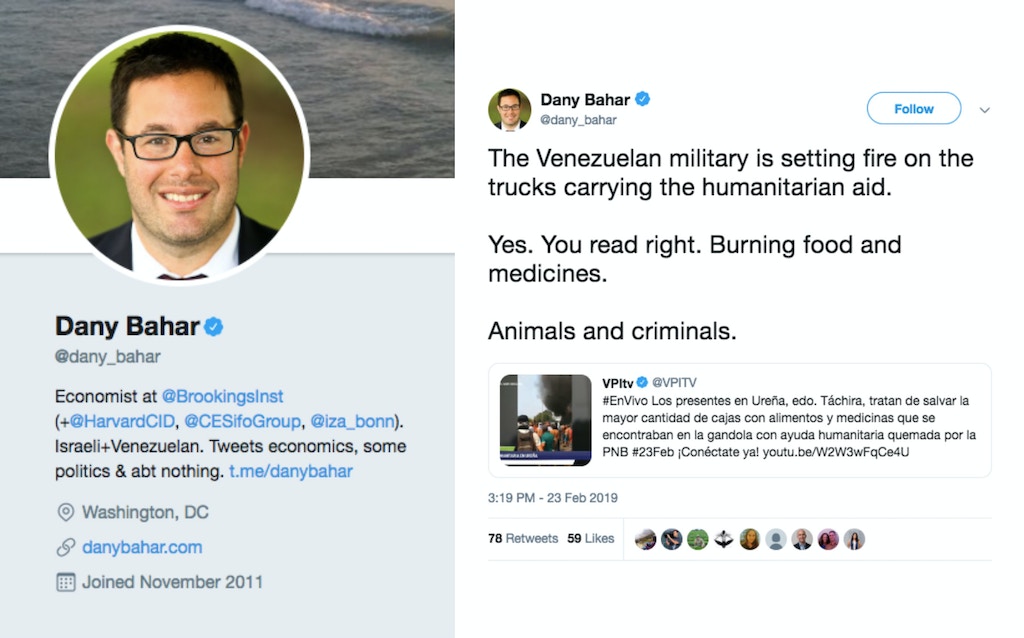 But on Saturday night, the New York Times published a detailed video and accompanying article proving that this entire story was a lie. The humanitarian trucks were not set on fire by Maduro’s forces. They were set on fire by anti-Maduro protesters who threw a molotov cocktail that hit one of the trucks. And the NYT’s video traces how the lie spread: from U.S. officials who baselessly announced that Maduro burned them to media outlets that mindlessly repeated the lie. 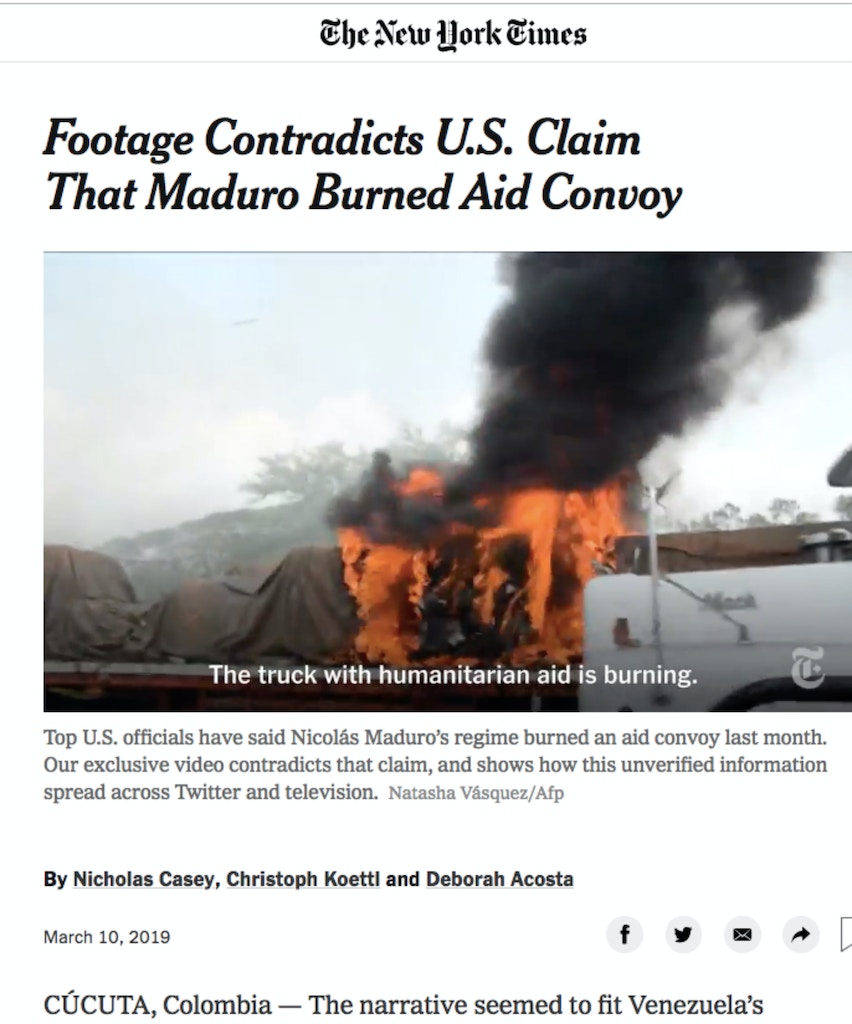 While the NYT’s article and video are perfectly good and necessary journalism, the credit they are implicitly claiming for themselves for exposing this lie is totally undeserved. That’s because independent journalists – the kind who question rather than mindlessly repeat government claims and are therefore mocked and marginalized and kept off mainstream television – used exactly this same evidence on the day of the incident to debunk the lies being told by Rubio, Pompeo, Bolton and CNN.

On February 24, the day the lie spread, Max Blumenthal wrote from Venezuela, on the independent reporting Grayzone site, that “the claim was absurd on its face,” noting that he “personally witnessed tear gas canisters hit every kind of vehicle imaginable in the occupied Palestinian West Bank, and I have never seen a fire like the one that erupted on the Santander bridge.” He compiled substantial evidence strongly suggesting that the trucks were set ablaze by anti-Maduro protesters, including Bloomberg video showing them using Molotov cocktails, to express serious doubts about the mainstream narrative. On Twitter, in response to Marco Rubio’s lie, he wrote: