“Why was there never an interrogation of this president? We were told for weeks by experts you cannot deal with an obstruction of justice charge or investigation without getting to motive. You don’t get to motive until you hear from the person himself who’s being targeted… How can they let Trump off the hook? So far tonight, we have no reason to believe Trump is going to be charged by rhetoric in the document itself, in the Mueller report, he will not be charged with obstruction or of collusion, without ever having to sit down with the special counsel and answer his damn questions. How can that happen?”

Special Counsel Bob Mueller has handed in his report, marking the effective end of the three-year Trump Russian Collusion investigation.

Chris Matthews, the ‘Hardball’ reporter who famously said that Barack Obama gave him a ‘thrill up his leg‘, was beside himself while reporting that the Mueller investigation ‘let Trump off the hook‘. Over at MSNBC, Rachel Maddow held back tears as she read her script telling her what to think about Mueller’s conclusions, and on it went as the news that there would be zero Trump related indictments reverberated throughout the Liberal echo chamber.

Justice was served and the legal process completed, but that means nothing to a Liberal. They don’t care about fairness or the rule of law, they wanted Trump gone and they failed to get it. They spend tens of millions of taxpayer dollars on a 675-day ruthless investigation of Donald Trump and his team, and came up empty.

There never was any Russian Collusion, and everyone including Liberals knew that. But what there was and still is are the high crimes and misdemeanors of Hillary Clinton and the illegal activities of the Clinton Foundation. Now that President Trump has been exonerated, perhaps it’s time to open up that investigation.

Mueller wraps up — but don’t expect the hysteria to end

FROM THE NY POST: This means that Mueller firmly expects to file no more criminal charges, which pretty much confirms that all the media and political hysteria about his investigation was driven more by partisan wishful thinking than by anything resembling hard evidence.

And that hysteria used up far too much time and attention in a nation with plenty of real issues to worry about.

Yes, as much as possible of Mueller’s report should be released to the public, if only to reduce the inevitable conspiracy theorizing. We guarantee that various bitter-enders are going to start noting again that Mueller’s a Republican, as if that were news.

SADLY, EVEN A REPORT THAT CLEARLY STATES THAT THERE’S ZERO EVIDENCE PRESIDENT TRUMP AND HIS CAMPAIGN TEAM EVER DID ANYTHING WRONG WON’T BRING AN END TO THE NONSENSE.

The Democratic-controlled House is already starting its own “investigations,” which will be enough to launch hundreds of news stories about what they might find, and about what anonymous sources claim they have found.

But most Americans will learn a big lesson from how the chattering classes misrepresented the Mueller probe. The hysterics will be playing to ever-smaller audiences while the rest of the country moves on. READ MORE

In This Election The Establishment Is Playing for Keeps 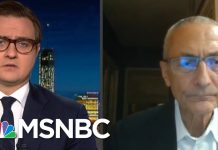