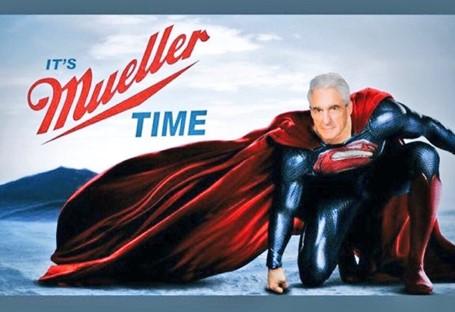 Now that the giant Mueller Nothingburger (with a side of crow-flavored fries, per Jim Kunstler) has been officially delivered unto the mainstream media’s wailing and gnashing of teeth, the essence of the matter should be obvious: To wit, the RussiaGate Collusion story was always way above the pay grade of the legal sleuths and gunslingers who wasted $25 million on it – and notwithstanding 2,800 subpoenas, 500 witnesses, 40 FBI agents and 21 lawyers.

This prosecutorial blitzkrieg had no chance of discovering the nefarious facts of conspiracy, however, because there never were any worthy of adult consideration. To the contrary, from day #1 the whole cock-and-bull story was based on a syllogism which held that Trump’s very election victory and support for rapprochement with Russia were in themselves proof of a conspiracy with the Kremlin to steal the election.

That is to say, by the lights of the Dems, official Washington and their mainstream media echo chamber, Hillary Clinton could not have lost the 2016 election to the worst GOP candidate in history including Barry Goldwater and Alf Landon (true) without the sinister intervention of a foreign power hostile to Hillary.

Likewise, Russia is perforce the enemy that Washington needs in order to stay in the business of Empire. So advocacy of rapprochement with Moscow was per se evidence that the Kremlin had blackmail (kompromat for the RussiaGate cognoscenti) on Trump and his campaign.

Once these predicates were established, of course, any old dog-eared “facts” could be hung on the frame in order to establishment an air of verisimilitude.

But now we know. Strip away the false predicates and the flotsam and jetsam of the case fall flat on their face. Even 22 months of Mueller Time couldn’t stich together a Humpty-Dumpty that never was.

As it happens, however, there has been all along a perfectly plausible alternative explanation for why Trump won and why repairing relations with Russia made eminent good sense.

Namely, that America is suffering Regime Failure. Thus, wrong-headed Washington policies have brought prosperity to Wall Street but not main street, which is what actually explains why Trump won the left-behind precincts of Flyover America.

Regime Failure has also fostered confrontation with Russia when it is no threat to homeland security at all, but so doing has vilified Putin and Russia to the point that random dots of RussiaGate got woven into a preposterous theory of collusion.

What is left without the syllogistic predicates, of course, are the ludicrous threadbare facts of the case.

After all, can there be anything more pitiful after 22 months of prosecutorial scorched earth on the Russian collusion file than Mueller’s list of indictments. These include:

– 13 Russian college kids for essentially practicing English as a third language at a St. Petersburg troll farm for $4 per hour;

– 12 Russian intelligence operatives who might as well have been picked from the GRU phonebook;

– Michael Flynn for doing his job talking to the Russian Ambassador and confusing the confusable Mike Pence on what he said and didn’t say about Obama’s idiotic 11th hour Russian sanctions;