CNN has gotten so bad with Fake News that they are even lying about stories that have no major significance. It is almost like they are lying just because they can, as long as it makes someone in the Trump administration look bad.

CNN was just spectacularly and utterly humiliated, very publicly by U.S. Department of Housing and Urban Development official Lynne Patton, after CNN “journalist” Ray Sanchez published an article headlined “Lynne Patton, a Trump housing official, says she has presidential OK for reality TV,” where within the article, under the byline Ray Sanchez and Rene Marsh, they write “Lynne Patton, a longtime Trump family associate who made a controversial appearance at last week’s House hearing with Michael Cohen, says she has the President’s blessing to follow in his footsteps as a reality TV star, even as she serves as a high-ranking federal housing official.”

The “reality” show referenced is a “still-developing show about black Republicans,” and the CNN reporter that spoke to Patton, Ray Sanchez, claims to directly quote her, shown below:

Asked if she has Trump’s approval, Patton said, “Yes.”

“I would never have even asked HUD if I hadn’t first asked the Trump family,” said Patton, who planned Eric Trump’s wedding, in an interview with CNN.

The problem is….. it was fake news.

Approximately two hours after CNN promoted the article on Twitter, Patton responded on their thread, stating “1) I never said I had the “President’s blessing” for this project. I said the exact OPPOSITE – and have it on tape. Seeking approval from various family members & POTUS are 2 different things. Stop conflating for click-bait headlines 2) NOR am I committed to project #FakeNews,” along with a GIF image of President Trump leaning into a microphone and saying “wrong.” 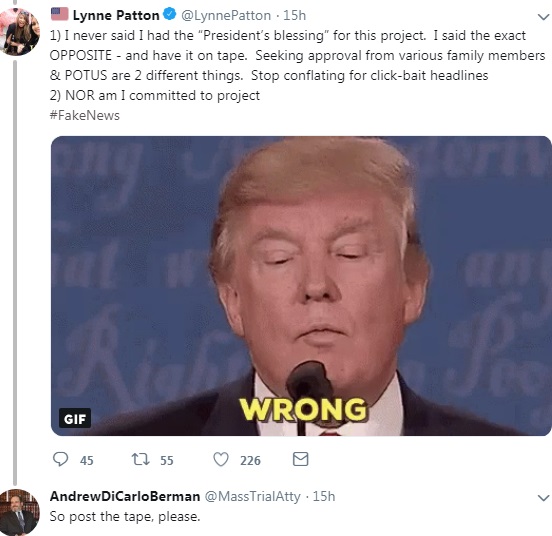 Smart woman taping the interview, otherwise it would have been a  he said/she said thing and CNN would undoubtedly claim they were right and she was lying.

One gentleman was very polite, asking her “So post the tape, please.” Many others in the comment thread basically accused her of lying, with others aiming derogatory statements at Patton.

On March 8, at 11:44 am Patton dropped the tape in response to the polite gentleman, along with a message for CNN, stating “THIS IS WHY NO ONE BELIEVES THE #FAKENEWS ANYMORE!!
@CNN – RETRACT YOUR HEADLINE & STORY NOW!
AUDIO PROOF

A 18 second clip, where CNN’s Sanchez asks her “Is it true the President gave you his blessing to do this reality show?

Her response was very clear, as she is heard on the audio saying “Nooooo, where did you hear that?  I don’t know who your source is!”

Three minutes after I archived the original fake news story, CNN updated their article by changing the direct lie of “Asked if she has Trump’s approval, Patton said, “Yes.”  They also offer a short note at the bottom of the article which now says “Clarification: This story and headline has been updated to reflect Patton’s follow-up statement that she has spoken to members of the Trump family, but not the President himself.”

No mention that the reporter claimed to have quoted her directly as her saying “yes,” when she very clearly said “Noooooo,” meaning he outright lied, and it wasn’t until she produced the audio evidence that he knowingly published fake news, that CNN updated their story.

Even in their supposedly corrected version of their story, CNN manages to flub it again, changing the “Asked if she has Trump’s approval, Patton said, ‘Yes’, to “Patton said she has spoken with members of Trump’s family, but later stressed that she has not spoken to the President himself.”

Later stressed? The audio is very clear, she stressed it at the time of the interview, the only thing she did later, was prove the reporter lied about her answer. Simply another lie to attempt to duck the responsibility for publishing fake news in the first place!

(Note: I have trouble embedding Twitter videos/audios into articles, so click here to hear it for yourself.)

While the original story was tweaked, even if the tweak is a lie as well, the original promotional tweet by CNN, is still up claiming Patton had the “President’s blessing.” 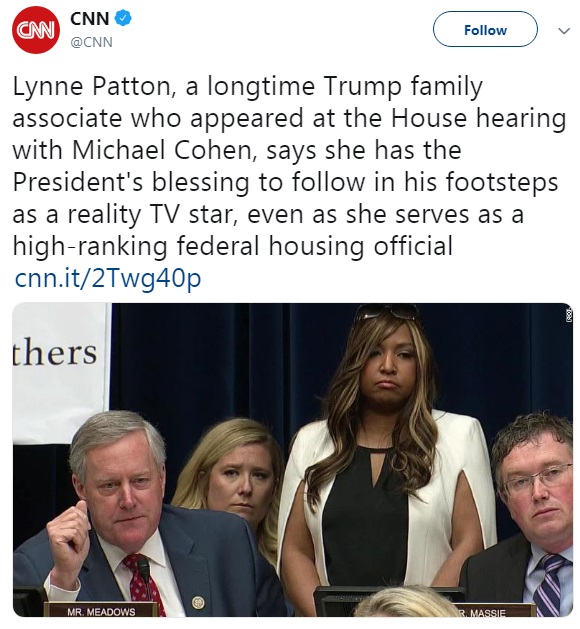 Over the past several years, we at ANP, and many others have documented the increasingly frequent false and utterly fake stories coming from the MSM, all trending one way, anything that is negative for President Trump or his supporters. They have run with false narratives, been forced to retract, had reporters forced to resign (three from CNN), one television pundit was even suspended without pay, but CNN has by far had the most in amount and the most egregious lies printed.

Granted humans make mistakes, but in many of the cases documented, it is not human error, but deliberately pushing fake news and false narratives, and from organizations that have billions of dollars behind them, they should definitely spend some of that to have specific people in place to fact check their reporters, otherwise the organization as a whole, is culpable.

Documenting them is important, but so is publicly calling them out because as this practice continues, more and more of the general public learn of it, and start demanding answers.