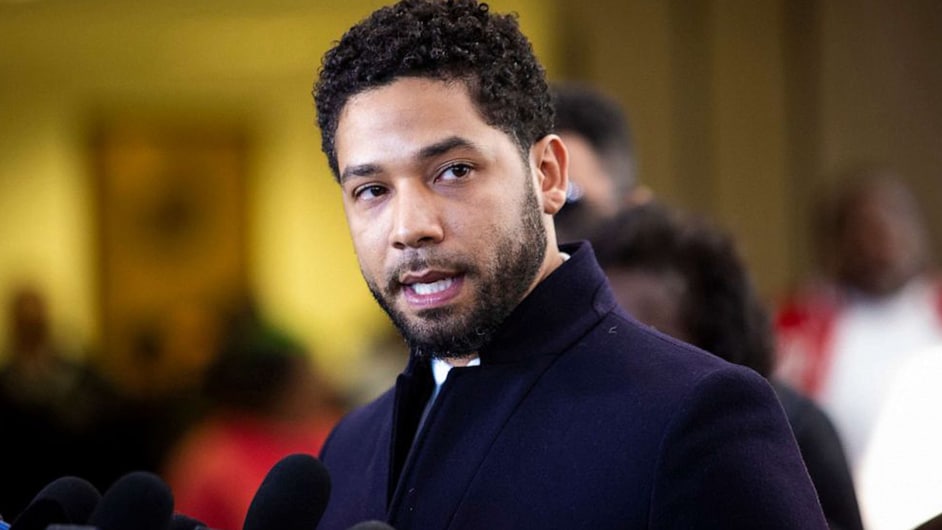 The case against Jussie Smollett was fully dismissed and the court files were sealed. Why? This article looks at the elite forces at play in this “hate and division” hoax.

For years, The Vigilant Citizen has been warning against the blatant agenda seeking to sow division in the masses, especially when it comes to race and political affiliation. The unrelenting efforts of the elite to create an ever-widening gap between blacks and whites, liberals and conservatives and even between men and women can be easily observed all over mass media and in the public space. And it is working.

The “hate hoax” perpetrated by Empire actor Jussie Smollett was a disturbing example of the dishonesty and unscrupulous nature of those who are looking to push this agenda. And, at first, it worked perfectly. The event succeeded in generating extreme outrage and animosity in the public space while prompting calls for urgent political action. The story had everything. I mean, Smollett was even wearing a noose around his neck, tapping into sensitive and potentially explosive imagery.

However, the arrest of Smollett and the exposure of this false flag event brought some relief: Justice will be served and, more importantly, the truth will come out.

But it didn’t. In a completely baffling turn of events, Smollett’s case was fully dismissed. Not only that, the case was sealed, meaning that its details will not be released to the public. How did this happen?

The answer is simple: Connections to the elite. Powerful people got involved and made a mockery of this extremely important trial. Let’s look back at what happened.

On January 22, 2019, Smollett received a threatening letter which depicted a stick figure hanging from a tree with a gun pointing towards it. It read “Smollett, Jussie you will die” and “MAGA” and contained a white powder determined to be Tylenol. 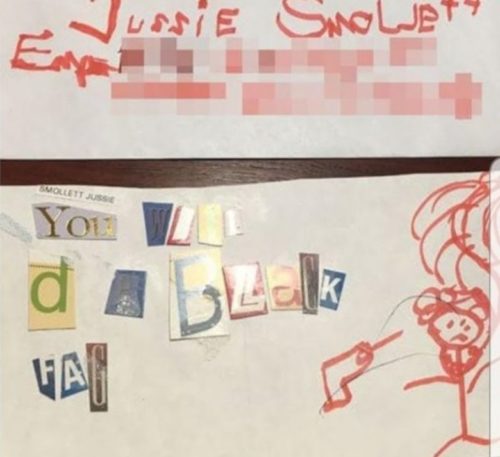 On January 29, 2019, Smollett said that he was attacked in the early morning of that day in Chicago’s Streeterville neighborhood. The police were called after 2:30 AM. When they arrived, Smollett had a white rope around his neck. He told police that he was attacked outside his apartment building by two men in ski masks who called him racial and homophobic slurs, and said: “This is MAGA country”. Smollett claimed they used their hands, feet, and teeth as weapons in the assault.

According to a statement released by the Chicago Police Department, the two suspects then “poured an unknown liquid” on Smollett and put a noose around his neck.

Smollett claimed that the attack may have been motivated by his criticism of the Trump administration and that he believed that the alleged assault was linked to the threatening letter that was sent to him earlier that month.

Following the “attack”, prominent figures in politics and the entertainment business initially support for Smollett, including Kamala Harris. 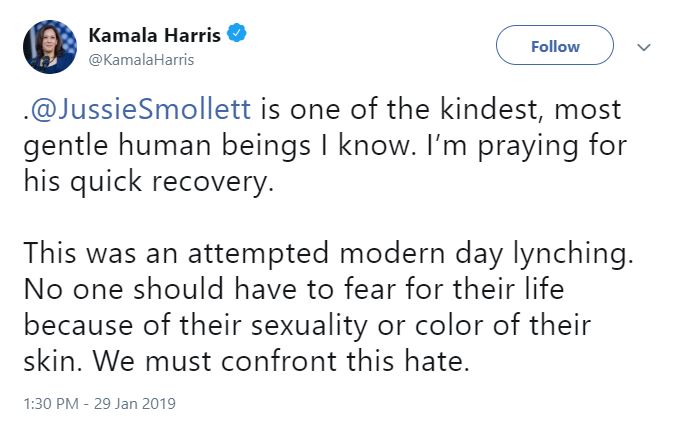 Kamala Harris and Cory Booker (both Presidential candidates) described the attack as an attempted modern-day lynching. Booker urged Congress to pass a federal Anti-Lynching bill co-sponsored by him and Harris. The bill says that “if two or more people are convicted of killing someone because of their ‘actual or perceived race, color, religion, or national origin,’ they can be sentenced to up to life in prison. Smollett’s hoax was being used to pressure lawmakers to pass this bill which would add a racial dimension to the justice system. The event also got intense media coverage. 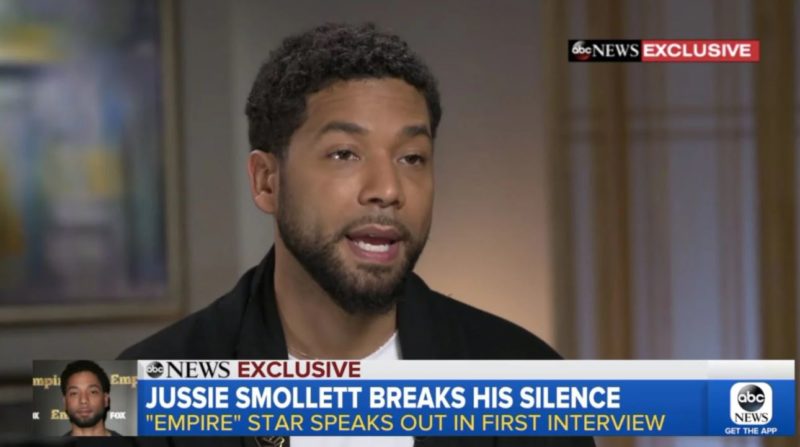 Smollett on ABC discussing the “attack”.

When asked about the holes in his story, Smollett played the race card. Again.

“I have to acknowledge the lies, and the hate. And it feels like if I had said it was a Muslim, or a Mexican, or someone black, I feel like the doubters would have supported me much more. A lot more. And that says a lot about the place that we are in our country right now.”

Proof of a Hoax

On February 16, Chicago police discovered evidence indicating that Smollett had paid two brothers of Nigerian descent $3,500 to stage the attack. The brothers worked as extras on Empire. 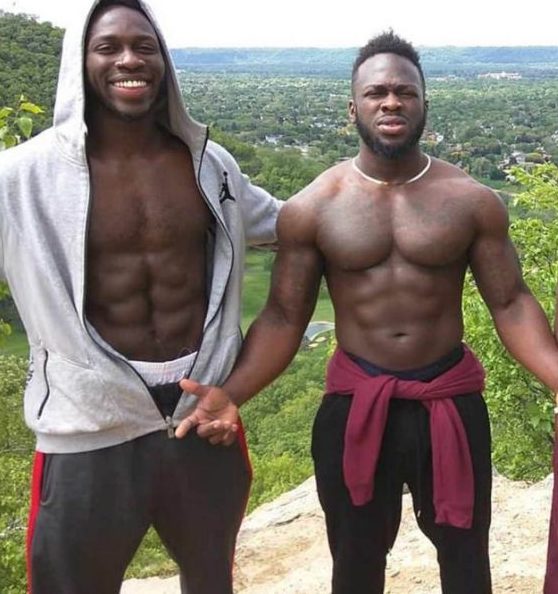 Abel and Ola Osundairo, the two brothers who helped stage the attack.

Proof against them was irrefutable: Financial records indicated that the brothers purchased the rope found around Smollett’s neck at a hardware store in Ravenswood over the weekend of January 25; They were also caught on camera in a clothing store where they bought gloves, ski masks, and a red hat that the police say was used in the attack. The brothers asked specifically for a MAGA hat, which the store doesn’t sell.

After interrogating the brothers, Chicago police released because “information they presented during the interrogation scored them their exit from custody”. In other words, they probably snitched on Smollett.

On February 20, 2019, Smollett was charged with a class 4 felony for filing a false police report. On March 8, Smollett was indicted on 16 felony counts of “false report of offense” related to the incident.

The FBI is still investigating whether Smollett was involved in the threatening letter that was sent to him the week before the incident.

On February 19, 2019, Cook County State’s Attorney Kim Foxx announced that she had recused herself from the investigation, due to her “familiarity with potential witnesses in the case”.

A few weeks later, the Chicago Sun-Times reported that former first lady Michelle Obama’s chief-of-staff and Democratic fixer Tina Tchen reached out to Foxx. And wheels got in motion. 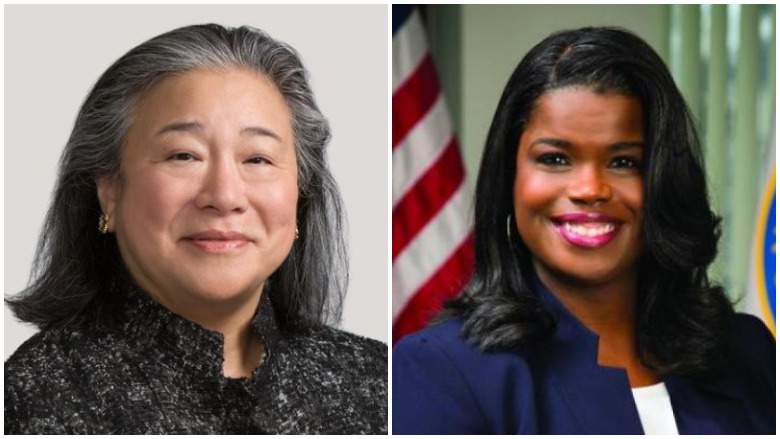 The leaked e-mails and text messages between Tchen and Foxx clearly show that powerful people worked “behind the scenes” to make sure that justice was not served. 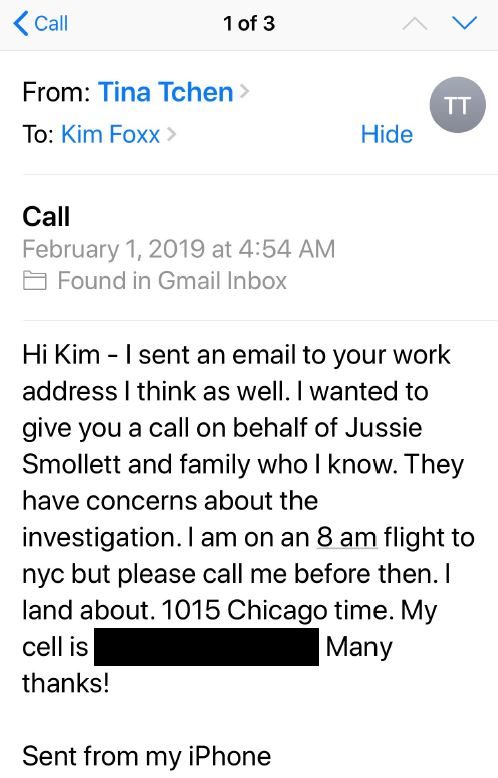 An e-mail sent from Tina Tchen to Kim Foxx. Read all of the leaked e-mails and text messages here.

Tchen was to “Reach out to FBI to ask that they take over the investigation” in lieu of the Chicago Police Department, which was agreed upon. A Smollett family member responded: “Omg this would be a huge victory.”

The result of this meddling: On March 26, all charges filed against Smollett were dropped, and Judge Steven Watkins ordered the public court file sealed.

This “slap on the wrist” happened despite a mountain of evidence. Why? Elite meddling.

If you never heard of Q, read my article entitled An Objective Analysis of the QAnon Phenomenon. Many believe that Q is directly connected to President Trump and, to prove this fact, Q sometimes hints access to classified materials.