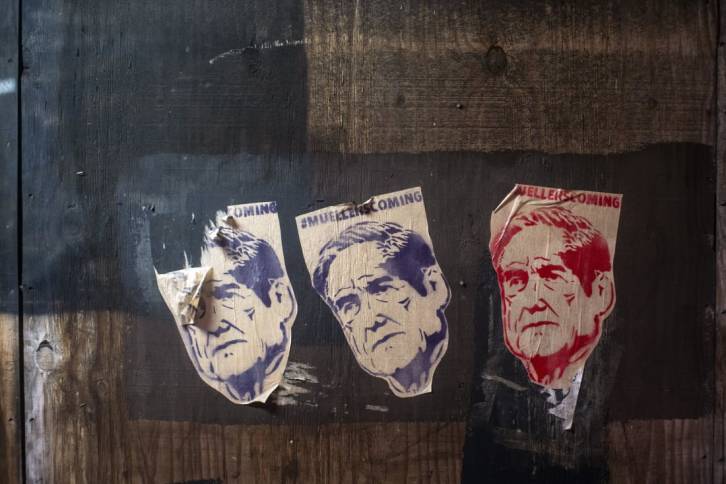 Note to readers: in light of news that Special Prosecutor Robert Mueller’s investigation is complete, I’m releasing this chapter of Hate Inc. early, with a few new details added up top.

Nobody wants to hear this, but news that Special Prosecutor Robert Mueller is headed home without issuing new charges is a death-blow for the reputation of the American news media.

As has long been rumored, the former FBI chief’s independent probe will result in multiple indictments and convictions, but no “presidency-wrecking” conspiracy charges, or anything that would meet the layman’s definition of “collusion” with Russia.

With the caveat that even this news might somehow turn out to be botched, the key detail in the many stories about the end of the Mueller investigation was best expressed by the New York Times:

The Times tried to soften the emotional blow for the millions of Americans trained in these years to place hopes for the overturn of the Trump presidency in Mueller. Nobody even pretended it was supposed to be a fact-finding mission, instead of an act of faith.

The Special Prosecutor literally became a religious figure during the last few years, with votive candles sold in his image and Saturday Night Live cast members singing “All I Want for Christmas is You” to him featuring the rhymey line: “Mueller please come through, because the only option is a coup.”

In an apparent endorsement of an investigation that Mr. Trump has relentlessly attacked as a “witch hunt,” Mr. Barr said Justice Department officials never had to intervene to keep Mr. Mueller from taking an inappropriate or unwarranted step.

Mueller, in other words, never stepped out of the bounds of his job description. But could the same be said for the news media?

For those anxious to keep the dream alive, the Times published its usual graphic of Trump-Russia “contacts,” inviting readers to keep making connections. But in a separate piece by Peter Baker, the paper noted the Mueller news had dire consequences for the press:

It will be a reckoning for President Trump, to be sure, but also for Robert S. Mueller III, the special counsel, for Congress, for Democrats, for Republicans, for the news media and, yes, for the system as a whole…

This is a damning page one admission by the Times. Despite the connect-the-dots graphic in its other story, and despite the astonishing, emotion-laden editorial the paper also ran suggesting “We don’t need to read the Mueller report” because we know Trump is guilty, Baker at least began the work of preparing Times readers for a hard question: “Have journalists connected too many dots that do not really add up?”

The paper was signaling it understood there would now be questions about whether or not news outlets like itself made galactic errors by betting heavily on a new, politicized approach, trying to be true to “history’s judgment” on top of the hard-enough job of just being true. Worse, in a brutal irony everyone should have seen coming, the press has now handed Trump the mother of campaign issues heading into 2020.

Nothing Trump is accused of from now on by the press will be believed by huge chunks of the population, a group that (perhaps thanks to this story) is now larger than his original base. As Baker notes, a full 50.3% of respondents in a poll conducted this month said they agree with Trump the Mueller probe is a “witch hunt.”

Stories have been coming out for some time now hinting Mueller’s final report might leave audiences “disappointed,” as if a President not being a foreign spy could somehow be bad news.

Openly using such language has, all along, been an indictment. Imagine how tone-deaf you’d have to be to not realize it makes you look bad, when news does not match audience expectations you raised. To be unaware of this is mind-boggling, the journalistic equivalent of walking outside without pants.

There will be people protesting: the Mueller report doesn’t prove anything! What about the 37 indictments? The convictions? The Trump tower revelations? The lies! The meeting with Don, Jr.? The financial matters! There’s an ongoing grand jury investigation, and possible sealed indictments, and the House will still investigate, and…

Stop. Just stop. Any journalist who goes there is making it worse.

For years, every pundit and Democratic pol in Washington hyped every new Russia headline like the Watergate break-in. Now, even Nancy Pelosi has said impeachment is out, unless something “so compelling and overwhelming and bipartisan” against Trump is uncovered it would be worth their political trouble to prosecute.

The story hyped from the start was espionage: a secret relationship between the Trump campaign and Russian spooks who’d helped him win the election.

The betrayal narrative was not reported as metaphor. It was not “Trump likes the Russians so much, he might as well be a spy for them.” It was literal spying, treason, and election-fixing – crimes so severe, former NSA employee John Schindler told reporters, Trump “will die in jail.”

In the early months of this scandal, the New York Times said Trump’s campaign had “repeated contacts” with Russian intelligence; the Wall Street Journal told us our spy agencies were withholding intelligence from the new President out of fear he was compromised; news leaked out our spy chiefs had even told other countries like Israel not to share their intel with us, because the Russians might have “leverages of pressure” on Trump.

CNN told us Trump officials had been in “constant contact” with “Russians known to U.S. intelligence,” and the former director of the CIA, who’d helped kick-start the investigation that led to Mueller’s probe, said the President was guilty of “high crimes and misdemeanors,” committing acts “nothing short of treasonous.”