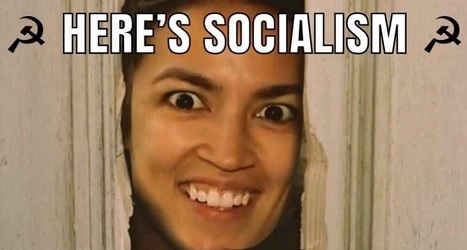 So far there are 13 confirmed Democrat ‘IneptOcrat’ candidates for the 2020 presidential election, with three others having formed exploratory committees, with others, such as former VP Joe Biden maybe being a possible, probable candidates, all of them running on platforms that seemingly conform to the policies of one of the newest members of the House of Representatives, the one that is a self-declared socialist, Alexandria Ocasio-Cortez.

One of the newer names running as an “ineptOcrat” is Andrew Yang who thinks running on a platform that includes handing $1,000 to every American adult, which would cost the U.S. approximately $4 trillion a year, is a practical idea.

We have Kamala Harris, Cory Booker, Bernie Sanders, Elizabeth Warren and others have all touted “medicare for all.” Elizabeth Warren even ventured into the “pay reparations” to African Americans because of slavery that ended over a century ago, well untilpolling showed that the majority of Americans don’t like that idea, now she doesn’t want to discuss the issue.  Kamala Harris and Julian Castro also waded into that reparations minefield.

Almost all the IneptOcrat candidates have signed on to support the “Green New Deal,” which in it’s initial roll-out, where the FAQ pagefor it was plastered on Ocasio-Cortez’s website (before it was promptly removed after people saw the ridiculous things within), included things like eliminating “farting cows,” and airplane travel. Of course she later claimed that a “draft,” had been uploaded accidentally, yet that doesn’t address the fact that they actually had a draft that included eliminating cow farts and plane travel.

Those are just the tip of the iceberg as to how far towards socialism the ‘IneptOcrats’ are leaning these days. The term “IneptOcrats” was brought to my attention by Twitchy, and it fits so well, I decided to use it, with a hat tip to Twitter user Mo Mo, who provided a longer list of positions one or more of the presidential contenders, and party leadership are pushing for.

She then followed that up with the following statement “Basically, more direct democracy followed by punitive, top down government fiat by bloated ineptocrats. Seems like a winner.”

She had a lot more to say, so click over to Twitchy and read through her thread, she makes excellent points. 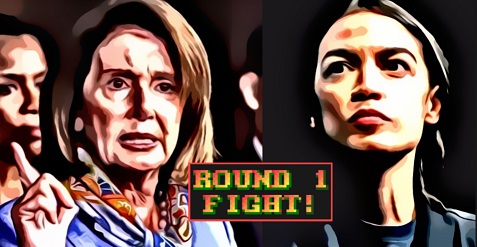 FOLLOWING THE SOCIALIST CONGRESS-KID LEADER, RIGHT OFF THE CLIFF

While knowing their platforms is important to be an informed voter, those platforms aren’t even the worst of the problems that liberal ineptness are causing them.

Why are the 2020 liberals lurching so far towards socialism right now, rather than the gradual gravitation that has marked the previous decades? Because they are attempting to ride the coattails of the popular kid on the block, Congress-Kid Alexandria Ocasio-Cortez. Some most likely just want to ride the wave of popularity while hoping it lasts, while others most likely are weary of her highlighting them and then releasing her online mob of activists against them if they take more moderate positions.

She has already been quoted as threatening more moderate democrats if they don’t toe the line, telling them they were going to be on a “list,” to be revealed to her online cult followers, as well as threatening to help “primary,” them to get them out of Congress.

When college kids were surveyed as to who the “face” of the Democrat party is, rather than choosing Speaker of the House, Nancy Pelosi, who is the most powerful IneptOcrat in congress, the overwhelming response was Ocasio-Cortez.

Tom Perez, the DNC chair, has referred to Ocasio-Cortez as the “future of the party.”

So, presidential contenders decided to ride the wave of a young freshman congressKid, who in a short few months has made so many flubs and gaffes that there are already compilation videos published, and they did so without thinking about what happens when they start pushing her policies, then Americans start realizing how radical and inept Ocasio-Cortez truly is.

Well, the numbers are in and the more Americans learn of the little socialist darling, the more UNpopular she has become.

The breakdown is truly telling, as only two demographics gave her a net favorability after learning more about her and her socialist position, non-whites and Democrats. she is up by 8 points among democrats and 9 points among non-whites.