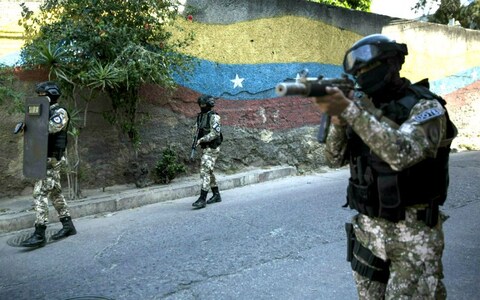 Dear fellows, the title of this article is intended to alert what happens in a real crisis. Criminals have been released in Venezuela and given guns to shoot the demonstrators who are protesting against Maduro.

This is another localized end-of-days event that is incredibly dangerous.

The criminals that conform the band inside the government Cuban-infiltrated and controlled “institutions” have opened the doors of Hell itself. (Anyone who has seen footage of what happens inside the Venezuelan jails will understand).

They released the inmates and sent them to fight the demonstrators.

They let the inmates out, gave uniforms and weapons to fight against the demonstrators. This is happening, and there are proofs of that published in the web by the infamous Varela, prison “minister”.

Over 25 murdered persons, and over 100 injured, all of them by gunshots. I am not going to turn this article in a politic debate. Far from that.

I would love to make sure you understand that this happens.

The possibilities of it happening perhaps are low, but the consequences of such event are extremely high once it occurs.

Of course, in the USA there are far more possibilities for the common homesteader to survive an inmates’ attack if such threat someday knocks at their door. Thank the Lord for that, people!

But there is something I feel the need to enhance. The gangs are getting organized progressively on time. Their tactics have become more and more specialized. Even in Venezuela, where common criminals were not as tactically prepared as in some other countries, the degree of organization has been increasing, and that, my fellows is alarming.

Occupying territories, setting up safe houses, instructing their members in weapon usage, using the shoot-and-run tactics…all of this is part of the new semi-organized crime. And it has to be deleted off the face of Earth.

Don’t EVER underestimate the intelligence of such criminals.

This could be a fatal mistake.

What is happening meanwhile I am typing for you, is that there are criminal gangsters roaming on the Chinese small motorcycles that I have mentioned enough before, with the guy in the backseat armed, in numbers of 20 or 30, shooting to the civilians protesting for the negative of the usurpation mafia to let the medical supplies and food to enter. Last time I checked, the police themselves had burned down 3 semi-trucks containing a part of the donations.

There are guys dressed in civilian clothes, with radios, bullet-proof vests, and AR-15s OTAN weapons without ANY identification. Completely against our laws and regulations. Roaming free, with the power to shoot civilians if they feel like doing so.

We don’t know who they are, where they are from, but we do know what their directives are. They are going to kill as many people as they need, and stay for as long as they need until the last persons protesting end up staining the asphalt with their blood.

This is what they mean when they talk of “Peace”. That is their version of peace. Submission. Subjugation. Humiliation. Anyone raising their heads and rebelling will be shot.

This is hard to assimilate, I know, but this is what is happening. There is no other way, but to fight our way inside our country again, even if this is done with borrowed weapons.

There are other ways inmates could get out of prison.

There is a real risk of inmates getting out jail in a crisis. Whether they are willfully released and armed or whether they make their escape, the possibility is of concern. If this is a major or minor issue in your location is up to you.

What should you do if you live near a prison?

But it should be a major concern for anyone being located at a tank car of a distance of any prison of any size.

Given the severity of the attacks of the roaming bands against unarmed people in the frontiers of Venezuela, the best approach, in any instance, would be using modern technology, such as drones to keep good surveillance of the surroundings.