Just as presidents are expected to act presidentially, Federal Reserve chairpersons are expected to act oracularly — as semi-supernatural beings who emerge now and again from some cave of mathematical secrets to offer reassuringly cryptic utterances on mysteries of the economy. And so was Jerome Powell wheeled out on CBS’s 60 Minutes Sunday night, like a cigar store Indian at an antique fair, so vividly sculpted and colorfully adorned you could almost imagine him saying something.

Maybe it was an hallucination, but I heard him say that “the economy is in a good place,” and that “the outlook is a favorable one.” Point taken. Pull the truck up to the loading dock and fill it with Tesla shares!  I also thought I heard “Inflation is muted.” That must have been the laugh line, since there is almost no single item in the supermarket that goes for under five bucks these days. But really, when was the last time you saw a cigar store Indian at Trader Joes? It took seventeen Federal Reserve math PhD’s to come up with that line, inflation is muted.

What you really had to love was Mr. Powell’s explanation for the record number of car owners in default on their monthly payments: “…not everybody is sharing in this widespread prosperity we have.”  Errrgghh Errrgghh Errrgghh. Sound of klaxon wailing. What he meant to say was, hedge-funders, private equity hustlers, and C-suite personnel are making out just fine as the asset-stripping of flyover America proceeds, and you miserable, morbidly obese, tattooed gorks watching this out on the Midwestern buzzard flats should have thought twice before dropping out of community college to drive a forklift in the Sysco frozen food warehouse (where, by the way, you are probably stealing half the oven-ready chicken nuggets in inventory).

Interlocutor Scott Pelley asked the oracle about “those half-a-million people who have given up looking for jobs.” Did he pull that number out of his shorts? The total number out of the workforce is more like 95 million, and when you subtract retirees, people still in school, and the disabled, the figure is more like 7.5 million. There was some blather over the “opioid epidemic,” the upshot of which was learn to code, young man. Personally, I was about as impressed as I was ten years ago when past oracle Ben Bernanke confidently explained to congress that the disturbances in Mortgage-land were “contained.”

David Leonhardt of The New York Times had a real howler in his Monday column on the state of the economy:

Americans are saving more and spending less partly because the rich now take home so much of the economy’s income — and the rich don’t spend as large a share of their income as the poor and middle class.

Here’s what’s actually going on in that beast known as The Economy: Globalism is winding down as a decade of Central Bank machinations reach their limits of deception, leaving the major trading nations with little more than comparative disadvantages. Europe is dissolving into political chaos. Japan is cannibalizing itself in preparation for its return to the Tokugawa shogunate. China is groaning with factories that turn out too much stuff; America is groaning with so much of that stuff that it’s turning into Yard Sale Nation. In the background of all that are the problematic flows of oil on tankers through dangerous chokepoints like the Straits of Molucca and the Straits of Hormuz, with a looming horizon on the supply as US shale oil production chokes to death on unpayable debt.

How long will it take to count all the votes? 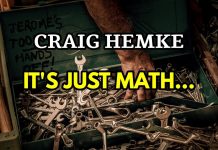 Cardi B Freaks Out: ‘Trump Supporters Are Everywhere,’ Swarming L.A. with ‘Big A** Trucks’