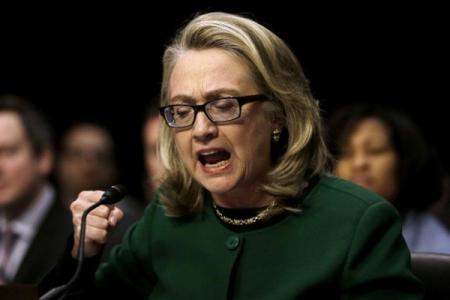 The more you learn about “Spygate” — the Obama-era operation launched by the Deep State to trip up POTUS Donald Trump’s 2016 presidential campaign and then undermine his administration after he unexpectedly won — the more angry it should make you.

Shocking new details revealed last week by a former law enforcement official named Roscoe B. Davis in a series of tweets that were backed by previous reporting from Fox News allegedly implicate the Clinton Foundation as raking in millions of dollars running guns and other weapons into the Middle East.

Furthermore, according to Davis’ information, former National Security Advisor Michael Flynn, who once headed the Defense Intelligence Agency, was also allegedly targeted by special counsel Robert Mueller and the Deep State because he knows all the details.

Davis began his series of tweets claiming that people were once again showing interest in the Sept. 11, 2012, attack on the U.S. embassy in Benghazi, Libya, in which U.S. Amb. Chris Stevens, along with CIA operatives Glenn Doherty and Tyrone Woods and Information Officer Sean Smith, were all killed.

The former law officer began by reminding readers that the Obama administration initially blew the attack off as a random incident caused by an anti-Muslim video.

It turns out that was not simply a lie but part of a much larger cover story. And the tragedy, Davis notes, had actually been set in motion by Hillary Clinton’s State Department and others within the intelligence community months earlier.

On July 25, 2012 Taliban fighters in Kunar province Afghanistan successfully targeted a US Army CH-47 helicopter with a new generation Stinger missile. The terrorists didn't properly arm the missile, so it didn't explode, it only downed the chopper. #Benghazi

Davis recounted that on July 25, 2012, Taliban fighters in Afghanistan targeted a U.S. Army CH-47 “Chinook” helicopter with a “new generation Stinger missile.” The United States is the only country that manufactures those missiles.

Reports at the time claimed that the chopper was downed by a Russian-style RPG, but subsequent reporting by Kenneth Timmerman indicated that a new generation Stinger was used. But the Taliban fighters did not properly arm the missile so it failed to detonate and only managed to down the Chinook. The next day, a U.S. Army explosives ordnance team that examined the wreckage discovered unexploded pieces of missile that could only be a next-gen Stinger. The debris included an actual serial number.