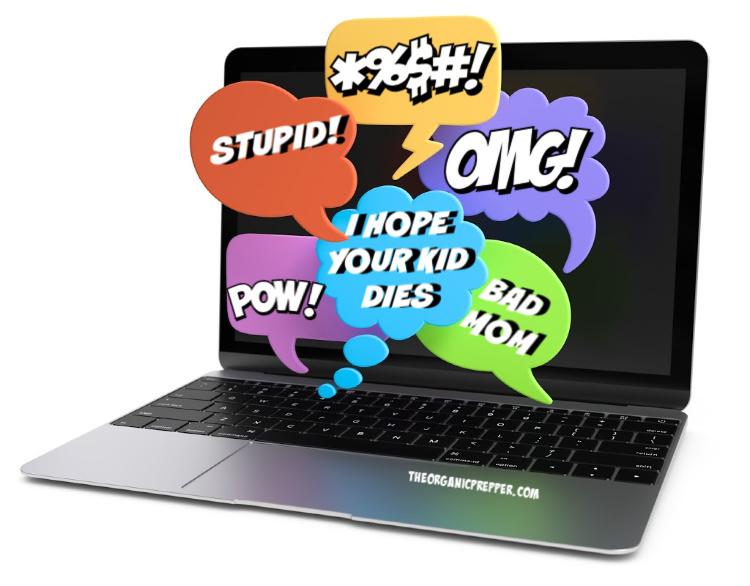 Warning: This article contains profanity in some of the quotes taken off Facebook.

I was really planning on staying out of the whole vaccine debate because I don’t think anyone anywhere ever changed their minds because they read a blog post once. What I can’t, in good conscience, stay out of is the censorship and propaganda surrounding this debate.

I read an article on CNN that was incredibly sad. A mother who had lost her young son to influenza was allegedly “attacked by anti-vaxxers.”  The report said:

Grieving and frightened, just days after her son’s death she checked her Facebook page hoping to read messages of comfort from family and friends.
Instead, she found dozens of hateful comments: You’re a terrible mother. You killed your child. You deserved what happened to your son. This is all fake – your child doesn’t exist…The attacks were from those who oppose vaccination… (source)

Honestly, from the bottom of my heart, it’s repugnant. No matter who is doing it, they should be ashamed of themselves. It’s on the same level as Westboro Baptist Church members picketing the funerals of soldiers.

The article goes on to say that this is a frequent occurrence, and in fact, planned as a tactic by “anti-vaxxers.”

Interviews with mothers who’ve lost children and with those who spy on anti-vaccination groups, reveal a tactic employed by anti-vaxers: When a child dies, members of the group sometimes encourage each other to go on that parent’s Facebook page. The anti-vaxers then post messages telling the parents they’re lying and their child never existed, or that the parent murdered them, or that vaccines killed the child, or some combination of all of those.  (source)

It is the lunatic fringe.

Most parents I know who object to mandatory vaccines simply want the choice to make medical decisions for their children. They don’t give two hoots if another parent opts to get their kid every jab under the sun.

That’s because they understand that parents should have choices.

The article I mentioned above is pure propaganda, published to make parents who don’t vaccinate look like evil lunatics. When CNN shared the statement of Larry Cook, the founder of Stop Mandatory Vaccination, they said that he “wasn’t denying” that it happened, downplaying what Mr. Cook and members of his group were going through.

This debate is so heated and so ugly that the claws are coming out.

Is it a stretch of the imagination – to wonder if the alleged “anti-vaxxers” attacking bereaved parents are actually on the pro-vax side, trying to justify the kind of behavior that they inflict upon parents who want a choice? Because this really seems to be their MO, as you’ll see when you read on.

Extremists are extreme, regardless of whether they’re pro-vax or anti-vax. Nobody should be abused for the medical decisions they’ve made.

Let’s talk about the stuff CNN left out.

Vaccine-Choice parents are getting attacked too.

I can tell you that I’ve received barrages of hate from numerous people because I dare to bring up the V-word in a way that isn’t “YAY, GET YOUR VACCINES!!!!”

I question the wisdom of giving a billion injections at once to tiny babies. That’s because my own tiny baby ended up in the hospital with encephalitis – swelling on the brain – after her first round of shots. Mercifully, she recovered without any serious effects, but that isn’t always the case.

After that, I weighed each decision carefully and worked with my pediatrician. My children got some vaccines, one at a time, and did not receive others. We do not get flu shots or HPV shots. We make our own medical decisions in cooperation with our doctor. I deliberately found pediatricians who would work with me because I felt so strongly about this. My kids weren’t snot-nosed little hillbillies, running around infecting others with deadly diseases. They were healthy, clean, and well-fed.

Because of my philosophy, I’ve gotten hate mail that would blow your mind. I’ve had to block people on social media who call me ignorant. I’ve had people say my kids should have been taken away from me. I’ve had people call me abusive. And these are the nicer things people said.

And think about it – I’m neither “pro-vax” nor “anti-vax.”  I’m a supporter of the choice to make medical decisions for my family. And because I support both one mother’s choice to get her babies fully vaccinated and another mom’s choice to opt out of all vaccines for her child, people think I’m a terrible person. It’s mind-blowing, isn’t it?

Here are some of the things people say to parents who want vaccine choice.

In the CNN article waaaaaaay at the end, you’ll find a few statements from parents who just want a choice.

“I do not condone violent behavior or tone and encourage decorum during discussion,” Cook wrote, adding that anyone “who deliberately engage[s] in the politics of advocating for compulsory vaccination where children may be further damaged through government vaccine mandates can expect push back and resistance, alongside knowledgable discussions about vaccine risk in social media commentary.”
Cook said some of the more than 160,000 members of his group have been targets of “harassment campaigns,” and that “police have actually showed up at my members’ doorsteps.”
He added that he’s been threatened and included a screenshot of a private Facebook message that said, “Finally found where you live. Finally I’ll be able to put a bullet in you. You are dead.” (source)

On a recent article that I wrote about a group of doctors who opposed mandatory vaccines, there were some rather unpleasant comments although most were productive.

But this is nothing compared to what medical freedom activists like Kate Tietje endure on a daily basis. (Warning: Profanity)

And this is just a teeny sample of the hate you’ll see on any page that suggests parents be in charge of their children’s healthcare.

There are groups of pro-vax people that are downright nasty.

There are virulent pages that espouse hate, discrimination, vengeance, and the ways to make parents who want a choice as angry as possible.

We abso-fucking-lutley CAN discrimination against you Pro-Plague dickheads! And we sane people DO have the right not to get infected with Measles or Polio or any other preventable deadly disease.

Keep yourself and infectious brats at home.

Here are the groups she recommends joining if you, too, want to troll parents who raise their kids differently. They’re called “tag groups” and when you tag them, members come and insult the person who posted the opinion with which they disagree. They’re like mean pro-vax gangs.

Here comes the pro-disease moms with a PHD in Google.

this is why thanos out here snappin

I will YEET this person into an ACTIVE VOLCANO

This Fills With Me A Rage I Didn’t Anticipate

Just throw the whole human away

imagine thinking “i have an idea!”, and the idea was this.

Since OP is trash this dumpster fire is not surprising

Alexa, how do I abort an adult?

If you want to see the true meaning of irrational hate, read through the comments on this post. It’s a public one so you’ll be able to see it without a Facebook account.

But lest it seem one-sided, trust me, it’s not.

People on both sides of this fight can be horrendous to those who disagree. My friend Jennifer has had some really terrible experiences, too.

I had to unfriend an anti-vax person last year because two of my kids are autistic and she would send me PMs telling me it was my fault for vaccinating, and that she would rather have her child die of measles than have to raise an autistic child. She was relentless and she’s far from the only one.

Non-stop attacks from anti-vaxxers and other “natural mamas” were a major reason I deleted everything off of my Facebook page and now only use FB for private groups. It’s not just vaccines either. I have also received incredibly malicious PMs and public call outs for letting my asthmatic child take prescription medications to control it instead of attempting to treat it with topical oils and honey.

It really is both sides doing it. Someone who is anti-vax is not going to be a target for of other anti-vaxxers so I can understand why they might believe it either does not happen or is a false flag operation by pro-vaxxers.

But if you do vaccinate or have a child with any kind of medical condition you will very quickly find out you can’t say that online. Friends, family, friends-of-friends and even complete strangers will blame you for vaccinating them. Just another one of the many things ripping our society apart.

Nobody should be talking to any parent like this. No matter what your beliefs.

Keep in mind, I’m not telling YOU whether or not to vaccinate your kids.

This should be your choice. You should do your research. You should discuss concerns with medical professionals. You should learn about some of the awards giving by the National Vaccine Injury Compensation Program – they’ve given out over a billion dollars to parents who proved their children were injured by vaccines.

The stories on both sides of this debate are horrific. There are parents who watched their child die of the flu and see it posted all over the media that “the child did not have a flu shot.”  There are parents who watched their baby, who was perfectly healthy and developing on schedule, get a vaccination and become a shell of their former selves after suffering grand mal seizures within hours of the injection.

Soon we won’t be able to discuss this at all.

And it is now becoming a free speech issue, as social media outlets crack down on all discussion of alternatives to “fully vaccinating” your children. Pinterest has removed any posts they deem anti-vax and Facebook has vowed to “get tougher” on anti-vax discussions, too.