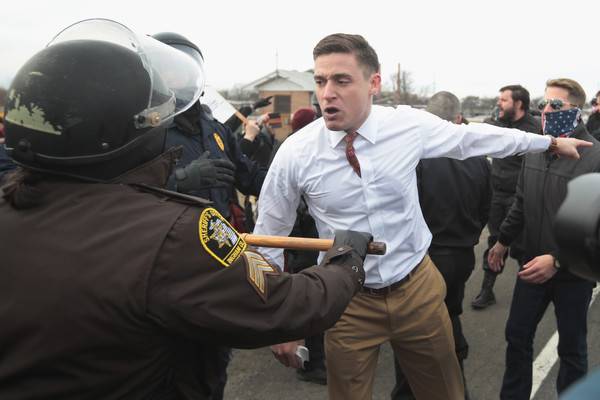 The demonstration for “Acte 16”, on March 2nd, was designed as a sight-seeing tour which passed by bastions of rich, traitorous criminals (the OECD, a school of luxury marketing, etc.) and so it concluded at a small roundabout in a ritzy area, Denfert-Rochereau.

As protesters amassed and cops loaded up, and with time in between my on-air interviews for PressTV, I headed for a florist shop. I needed some poles to train my sagging office plant, George W. Bouchra, named after a former boss who departed ignominiously (she was never employed by PressTV nor my boss – it’s a shared office)

As I began talking to the female shopkeeper, who seemed to be deciding whether or not to lock up and flee, a member of France’s riot police barged in and interrupted our conversation. He was thirsty. I can see why – French riot cops wear more armour than an American football player, and carry more attacking equipment than Batman. With his huge size thus rendered even huger, he quite intimidated the petite young florist.

The florist, of course, expected to pass her day among delicate flowers. She probably had no idea the Yellow Vest demonstration was designed to combust literally at her doorstep.

My hand to God, he asked her for bottled water not once, but 6 to 9 times. Was he convinced that florists also sell bottled water? More likely is: because he was a cop he knew that all he had to do was apply pressure to this lady/citizen, and she would hand over her own bottled water. Of course, because he was a French cop, he also knew that there would be zero repercussions if what he was doing was not forthright.

The intimidated young lady kept insisting she had no bottled water to give, and the cop finally gave up. When she turned to back to me I asked, “And do you have anything for me to eat?” 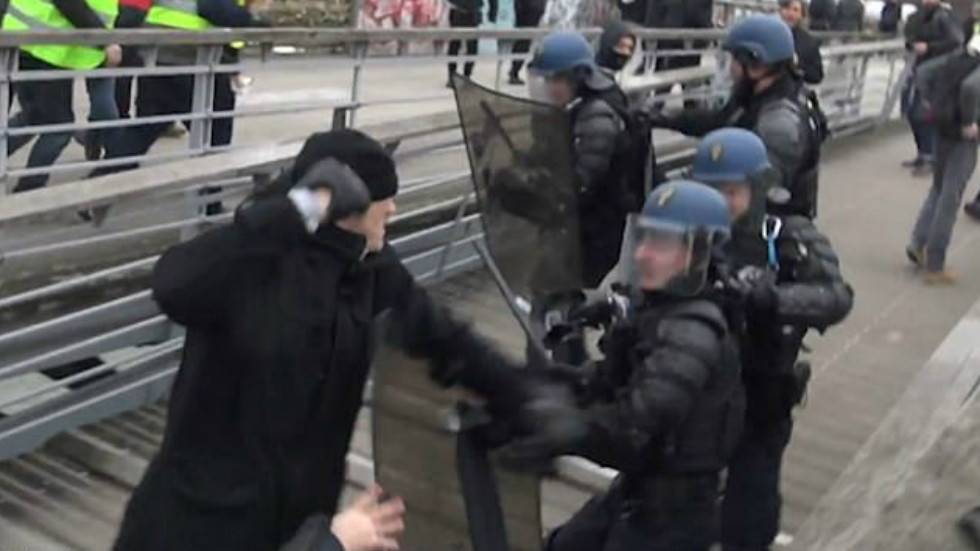 With the same look of fear still in her eyes, she answered quite earnestly, “No, I don’t. I’m sorry.” She honestly believed me, poor lady! It was only after I smiled and pressed her again, in the manner of the cop, that she finally relaxed back to her former self. She gave me the plant poles for free.

What this story relates is just how elitist Western cops are in 2019. Truly, only 1% of society feels they can act so above-the-law and so humiliatingly disrespectful to others.

Everybody, in every Western country, hates the police

Here’s something never reported in any Mainstream Media: at any French demonstration where riot cops are deployed one will hear the chant, “Everybody hates the cops” (Tout… le monde… déteste la police!).

Cops: We won’t protect you. And we’ll arrest you if you protect yourselves.

Now because the Yellow Vests are totally composed of White Power, anti-Semitic fascists such a chant would never be heard, right? The Yellow Vests – because they are a class-ignorant, intolerant, Islamophobia-focused movement calling for Joan of Arc’s exhumed skeleton to replace Emmanuel Macron as president – obviously love the cops. That’s also why leftist-rightish French intellectuals like Alain Soral are convinced that the cops are secretly wearing Yellow Vests under their blue uniforms, and are breathlessly waiting for the moment when France’s cops do what is never, ever done in any political revolution – join the protesters. Cops never switch sides – they have too much to lose.

Oh wait – the Yellow Vests were chanting it as well! The reason for that is, well, everybody hates the cops in France. They hate them with same force as they hate the 1% because cops are part of the 1%.

Let’s look at history: the rude demands for provisions and quarter (if not bottled water) was always made by soldiers and cops in ancient times. The banning of quartering soldiers – i.e., theft and parasitism – is the 3rd amendment in the US Bill of Rights for good reason. From the point of view of citizens: the idea that the Praetorian Guard, or anyone with a sword and a license to stab, was not part of the 1% could only be made by an absurd dogmatist.

Let’s look at 2019: go to any blue-collar community in the US and talk to women – they view cops and firemen as the biggest catches. Why? Because they have everything a conservative woman could want: social status, guaranteed jobs, early retirement and great pensions.

Social status: For those who have not lived in a small town – and I have lived in multiple and reported from them, as well – cops absolutely are social stars. Everybody knows who they are and the power they have; everybody kisses up to them, because they fear them and their power.

COVID-19 Is a Vehicle for Democrat Control of Individuals