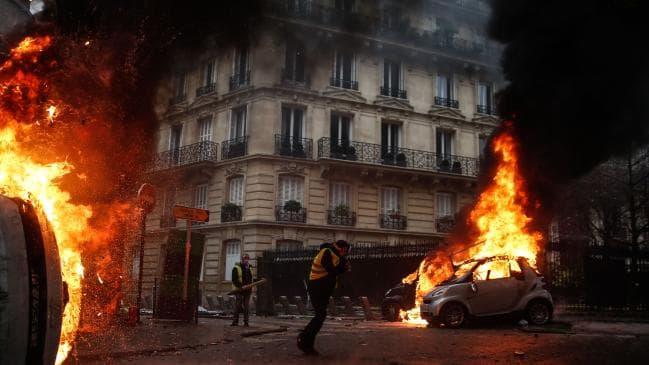 If the black smoke over the Paris skyline and charred cars and buildings along the Champs-Elysees which have become characteristic of France’s increasingly violent Yellow Vest protests over the past months weren’t alarming enough, things look to get much worse as the government prepares to escalate.

In an effort to clamp down on the unraveling security situation, which has lately seen banks and residential buildings torched, and luxury stores and restaurants vandalized and destroyed, the French authorities have announced the deployment of anti-terrorism military forces in order to protect and secure public buildings.

Following the worsening protest situation of the past weekend (after a brief lull at the end of President Macron’s failed ‘great debate’ initiative which pushed town halls to air grievances), which nearly turned deadly for random civilians caught in the mayhem of rioters clashing with police, the government will redirect counter-terror troops from Opération Sentinelle to focus on Yellow Vest related threats.

Opération Sentinelle began after the January 2015 Île-de-France attacks (the series of al-Qaeda linked terrorist acts that began with the Charlie Hebdo shooting) and resulted in some 10,000 soldiers and 4,700 police and gendarmes deployed at sensitive sites and public buildings across the country.

According to Bloomberg, French authorities have sought to calm the obvious and immediate fears raised that the move constitutes the government taking a full martial law approach of sending the military against its own people.

Following a weekly cabinet meeting on Wednesday, government spokesman Benjamin Griveaux pointed to the “new forms of violence”Saturday which he said justifies deploying the counter-terror forces.

“After seeing the new forms of violence Saturday, emergency measures will be taken to reinforce the reaction of the security forces,” Griveaux said. He added this is to include “the reinforced mobilization of Sentinelle to protect official building and other fixed positions in the capital.”

“Individuals have decided to attack democracy and its symbols,” Griveaux said further.

FREUDIAN SLIP? Husband of Kamala Harris Proclaims He is ‘Married to the Next President of the United States’