The albatross of $617 billion in bonds that mature in over 10 years.

Over the next few months, the Fed is expected to announce its new plan for its balance sheet. Meanwhile, as we’re riveted to the edge of our seat, the old plan continues on autopilot, and February was one of the few months when the Treasury “roll-off,” as Chairman Jerome Powell likes to call it, hit the “caps.”

In February, the Fed shed $57 billion in assets, according to the Fed’s balance sheet for the week ended March 6, released this afternoon. This slashed the assets on its balance sheet to $3,969 billion, the lowest since December 2013. Via its “balance sheet normalization,” the Fed has now shed $501 billion. And since peak-balance-sheet at the end of 2014, the Fed has shed $547 billion:

By comparison, the ECB’s balance sheet assets now exceed 40% of GDP, and the Bank of Japan’s assets amount to 101% of GDP.

February’s drop of $57 billion is larger than the scheduled QE unwind that is capped at $50 billion. But the Fed has other activities that impact the balance sheet. QE revolved around Treasury securities and mortgage-backed securities (MBS). And so does the QE unwind.

According to the Fed’s plan revealed in 2017, the QE unwind is supposed to take place on automatic pilot, based on a formula by which the Fed is scheduled to shed “up to” $30 billion in Treasuries and “up to” $20 billion in MBS a month for a total of “up to” $50 billion a month, depending on the amounts of bonds that mature that month.

The Fed sheds Treasury securities by allowing them to “roll off” without replacement when they mature. It does not sell them outright. When Treasury securities mature, the Treasury Department transfers money in the amount of face value plus outstanding interest to all holders of those securities. Treasuries mature at mid-month or at the end of the month.

On February 15, three issues of Treasury securities on the Fed’s balance sheet totaling $43.5 billion matured. On February 28, three issues totaling $12.5 billion matured. This brought the total for the month to $56 billion – above the cap of $30 billion. So the Fed reinvested $26 billion in new Treasury securities and allowed $30 billion of Treasuries to “rolled off” the balance sheet without replacement.

This reduced the total balance of Treasury securities by $30 billion, to $2,175 billion, the lowest since December 2013 – and down by $290 billion since the QE unwind began. This has whittled down the Treasuries acquired during the infamous “QE Infinity” by about one-third: 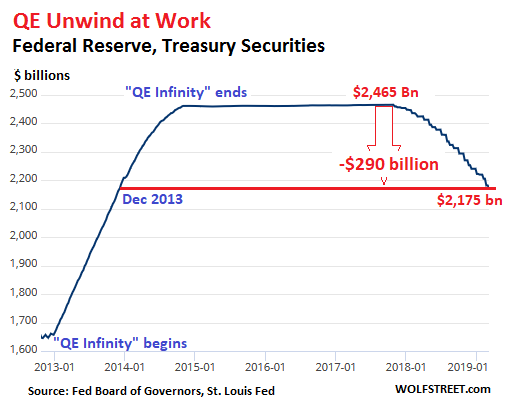 The Fed also holds residential MBS issued and guaranteed by Fannie Mae, Freddie Mac, and Ginnie Mae. Holders of MBS receive pass-through principal payments as the underlying mortgages are paid down or are paid off, such as when mortgages are refinanced. The remaining principal is paid off at maturity.

These pass-through principal payments cause the principal amount of a portfolio of MBS to decline over time in an unpredictable manner. To keep the balance of MBS from declining after QE had ended, the New York Fed’s Open Market Operations continued purchasing MBS in the market. 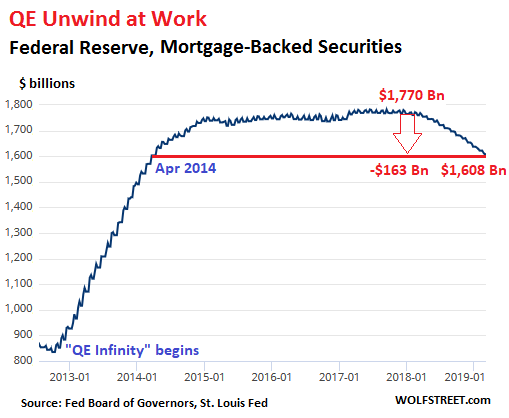 So the autopilot was still engaged in February, and the roll-off proceeded on schedule.

The slow roll-off of MBS securities – which is likely to slow further unless mortgage rates drop a lot – is now a topic at the Fed, which would like to get rid of them faster, but not too fast, as the most recent Fed meeting minutes indicated. In the new plan coming down the pike over the next few months, there will likely be a mention of this issue, and perhaps references to how it will be addressed.

Some of the suggestions have centered on selling the MBS outright and replacing those that have been sold with short-term Treasury bills, of which the Fed currently holds none. In addition, the Fed may switch more of the replacement Treasury securities it buys to Treasury bills, thereby bringing down the average portfolio maturity, which now exceeds 8 years.