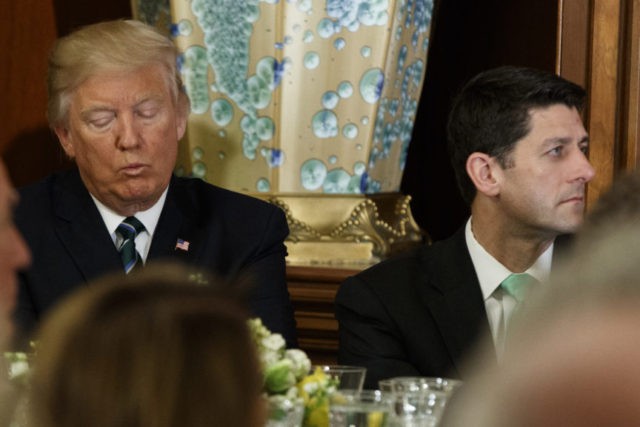 President Donald Trump is not happy that former House Speaker Paul Ryan blocked subpoenas of people and entities Trump thinks the House GOP should have been investigating during the first two years of his administration.

Trump told Breitbart News in an exclusive lengthy Oval Office interview that Ryan blocked issuance of subpoenas to people he thinks should have been investigated on the political left, and now that the Republicans no longer have the majority in the House, people Trump says Ryan protected may have gotten away with whatever they did that warranted investigation.

Trump said that House Freedom Caucus Chairman Rep. Mark Meadows (R-NC) and his predecessor and fellow conservative Rep. Jim Jordan (R-OH) wanted to be tougher with the left, but that Ryan would not let them.

“Paul Ryan wouldn’t give the right to have any subpoenas,” Trump told Breitbart News. “Okay? Now in all fairness, Meadows and Jordan and all these guys, they wanted to go tougher, but they weren’t allowed to by leadership.”

Trump’s comments came in a wider part of the conversation about how the left is more “vicious” than the right—and that the left in American politics plays “cuter and tougher.”

“So here’s the thing—it’s so terrible what’s happening,” Trump said when asked by Breitbart News Washington Political Editor Matthew Boyle about how the left is fighting hard. “You know, the left plays a tougher game, it’s very funny. I actually think that the people on the right are tougher, but they don’t play it tougher. Okay? I can tell you I have the support of the police, the support of the military, the support of the Bikers for Trump – I have the tough people, but they don’t play it tough — until they go to a certain point, and then it would be very bad, very bad. But the left plays it cuter and tougher. Like with all the nonsense that they do in Congress … with all this invest[igations]—that’s all they want to do is –you know, they do things that are nasty. Republicans never played this.”

Trump’s relationship with Ryan during Ryan’s tenure was fraught with peril from the get-go. Ryan only hesitantly backed Trump’s 2016 campaign in 2016 once Trump won the GOP nomination, but then backed off from supporting Trump after the release of the infamous Access Hollywood tape. Ryan ditched on a campaign event he had scheduled with Trump that weekend, and the following week held a conference call with House GOP members in early October 2016 in which he told members it would be acceptable to him if they abandoned the GOP nominee for president just weeks before the 2016 election.

“I am not going to defend Donald Trump—not now, not in the future,” Ryan said on the private call, audio of which was obtained by Breitbart News and published in early 2017.

Ryan followed through on that and never campaigned with Trump. When Breitbart News published this audio in the spring of 2017, his then-spokesman Brendan Buck claimed that “a lot has happened since then” and argued that Ryan was working with Trump on the president’s agenda in the first couple years of his administration.

With the exception of tax cuts, however, which the president led the way on, Ryan did not deliver much in the way of helping Trump achieve any of his agenda during the time Ryan served as Speaker while Trump served as president. Ryan became speaker in 2015, when then-Speaker John Boehner—facing a revolt from within his own GOP ranks—was forced to step aside. Others had sought the job and failed before Ryan eventually ended up running for the position.

Prior to being Speaker, Ryan was the failed 2012 vice presidential nominee for the GOP presidential ticket of former Massachusetts Gov. Mitt Romney. With Ryan at his side, Romney, who has since left Massachusetts behind to move to Utah and now represents Utah in the U.S. Senate, lost the 2012 presidential election to then-President Barack Obama.