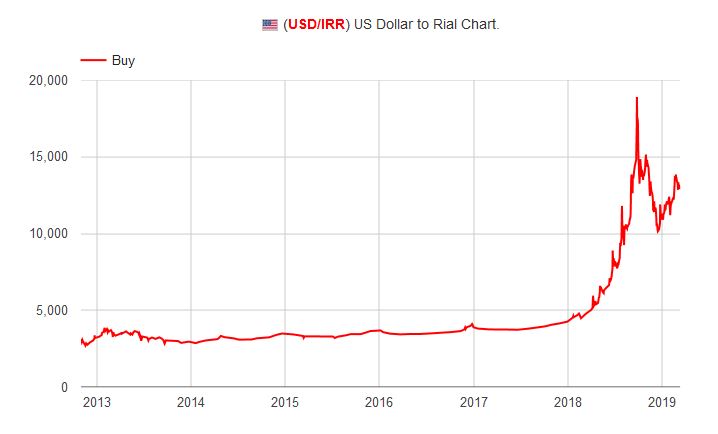 Since they were implemented last November, U.S. economic sanctions against Iran have been remarkably effective. Iranian oil exports have plummeted to 1.1 million barrels per day (bpd) from around 2.5 million bpd in April 2018, the month before President Trump announced the U.S. withdrawal from the Joint Comprehensive Plan of Action (JCPOA), otherwise known as the Iran Nuclear Deal.

Because crude oil is Iran’s key export, the Iranian economy has been thrown into reverse and the Iranian rial has plummeted. Below is a chart of the U.S. dollar in terms of rials.

Most of the world’s nations disagree with Trump’s sanctions and are doing their best to hew to the terms of the JCPOA. In response, three European nations – the UK, Germany, and France – recently unveiled a special payments mechanism that is intended to help lessen the isolation that has been imposed on Iran thanks to sanctions. Unfortunately, an alternative payment mechanism won’t serve as much of a counterbalance. The forces that Trump’s sanctions harness are just too strong to counter.

When the first round of Iranian sanctions was launched by Barack Obama during his presidency, he was careful to secure buy-in from the UN and other nations such as Russia and China. Trump has not been as cautious. Rather than seeking the cooperation of the rest of the world, Trump unilaterally deserted the Joint Comprehensive Plan of Action, an agreement reached in 2015 which removed Obama’s sanctions on Iran in return for limits on Iran’s nuclear program. The remaining signatories to the JCPOA have chosen to stay faithful to the deal.

Given the lack of support from these signatories (which include Germany, the UK, France, Russia, and China) Trump’s sanctions seemed destined to have more leaks than Obama’s. Many speculated that Iranian crude oil exports would not be crimped. But this hasn’t been the case. In less than a year, Iran has been crippled.

Last October, for instance, leaders of France, Germany, and the UK announced plans to introduce a special purpose vehicle (SPV) to “assist and reassure” businesses that engage in Iranian trade. Not only would this SPV allow for trade in crude oil, but it would also let other nations like China and Russia participate. I blogged about the SPV here.

This January, the October 2018 announcement was formalized with the introduction of the Instrument in Support of Trade Exchanges, or INSTEX. INSTEX, which is not yet operating, is based in Paris and uses the address of the French Ministry of Economy and Finance. Per Fisher, a former banker at Germany’s Commerzbank, has become INSTEX’s President, while Sir Simon McDonald, Permanent Under-Secretary at the UK Foreign and Commonwealth Office, has been appointed as chairman of the INSTEX supervisory board. For the time being France, Germany and the U.K. are the sole shareholders. But other European nation’s are expected to join, including Italy which is currently kicking the tires.

Although many details remain forthcoming, INSTEX is a pale version of what it was originally promised to be. Whereas the original October announcement described a channel that was open to Iranian oil exports, INSTEX is limited to trade in non-sanctioned goods such as pharmaceuticals and food. Only European trade qualifies; companies based in China, India, and other nations are excluded. This significantly crimps the scope of trade that can be facilitated.

The press release for INSTEX hints that at some point the channel will be opened up to crude oil and foreign businesses. However, the U.S.’s adoption of what I’m going to refer to as a us-or-them sanction strategy is watertight. Even if it is the case that INSTEX’s mandate is eventually broadened, the payments channel simply won’t get much use.

In our interconnected world, any country X can economically isolate country Y if X’s place in the global economy is sufficiently large relative to Y, and it is willing to issue an us-or-them threat to all other countries.

Us-or-them is a school yard tactic whereby a popular bully manages to isolate a less popular child by declaring that all other children must choose either the bully or her target as a friend. Since ending their relationship with the popular child is the costlier option, most will desert the less popular child.

Lockdown? CRACKDOWN! We Shall Not Speak Of That Which We See All Around Us…