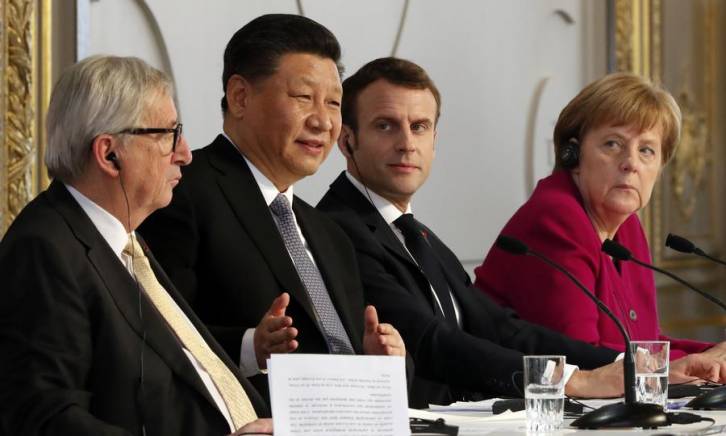 As imperfect as these figures may be, economic growth for the past 10 years after the 2008 financial crisis – which was a made in the West phenomenon – do tell an enlightening story.

French mainstream media, controlled by a rarified group of oligarchs, spun a risible narrative that Macron “imposed” this four-way meeting on Xi to press on him the new EC strategy aiming to “clarify” Chinese ambiguity in relation to the New Silk Roads, or Belt and Road Initiative (BRI).

As I previously reported, the EC now brands China a “systemic rival,” and seems to have realized that Beijing is an “economic competitor in search of technological leadership.” And that may translate as a threat to European values and norms.

Xi had just come from Rome – where the populist, eurosceptic Lega, Five Stars coalition government became the first G7 nation to sign a partnership with the BRI, igniting massive sparks of Atlanticist fear.

So in the end, what did we get from Chancellor Angela Merkel as the EU faced a process French elites describe as Sino-globalization?

We had realpolitik. Merkel stressed the BRI was an “important” project: “We, as Europeans, want to play an active part and that must lead to certain reciprocity and we are still wrangling over that a bit.” She added: “We are seeing the project as a good visualization of interaction, interrelation and interdependence.”

Merkel was essentially relaying the position of German business elites – as a trade powerhouse, the future of Germany lies in turbo-charging business with Asia, especially China.

So, instead of demonizing Rome, in practice Berlin will eventually embark on the same path. After all, Duisburg, in the Ruhr valley, is already the de facto top BRI terminal in northern Europe.

Xi and his EU partners did not fail to emphasize multilateralism. There could not be a more glaring contrast to the Trump administration’s narrative that China is a threat and the BRI is all about Chinese “vanity.” Juncker even tried to defuse the “systemic” tension: “We understand that China does not like the expression ‘rivals,’ but it is a compliment describing our shared ambitions.”

Add to it that Xi also felt the need to remind the EU leadership of the obvious. China will continue to “open up,” as it managed in only 40 years to accomplish what Europe did over the course of the entire industrial revolution.

On the – embattled – Macron front, more than New Silk Roads a de facto New Silk Air seems to be in effect.

No one – apart from Boeing – argues about a 30 billion euro-plus Chinese order to buy 300 Airbuses. And that’s only the beginning. The fact that Beijing will use Airbus technology to enhance its aviation prowess under the framework of Made in China 2025 is another matter entirely.

So Paris may not have turned, like Rome, into an official partner to the New Silk Roads – at least not yet. But the promises are quite telling – on three fronts.

1) The emphasis on multilateralism – “strong and efficient.” That’s not exactly Trumpian rhetoric.

2) Common action with Beijing on climate change and biodiversity.

3) An economic-trade partnership that respects mutual interests. That is, in fact, New Silk Roads-BRI official policy since the beginning, in 2013.

So when we compare the different strategies by Rome and Paris, Xi has, in fact, come out with a win-win.

Merkel, predictably, was careful to hedge to the hilt: “The triangle between EU, China and US is very important. Without the US, we will not be able to have multilateralism.”

At the same time, she stressed, the US-China trade war was “hitting our German economy.”

As for Team Macron, with the leader obsessed with posing as the savior of the EU ahead of the European Parliament elections in May, they could not help but go after the administration in Rome.

According to a Macron acolyte: “There is this bad European habit to have 28 different policies, with countries competing against each other to attract investment. We need to speak with a common voice if we want to exist. We have the same approach on the 5G issue: avoiding 28 different decisions.”

Which brings us to the case of Monaco, not exactly a shabby prize – and duly visited by Xi, who was received, literally, as royalty.

The principality is absolutely avid to gobble up the fast-growing Chinese luxury tourism market. And that explains why Monaco has already signed a deal with Huawei to be the first country to be entirely covered by 5G before the end of 2019.

Paris, by the way, has not ruled out using Huawei equipment. And as a cherry on the cake, guess which city Huawei chose to globally unveil its spectacular new P30 series of smartphones? Paris.

Make no mistake, for Beijing, in terms of trade and economic relations, Berlin is way more relevant than Paris. But these big three – Berlin, Paris and Rome – all have major roles to play.