SD Friday Wrap: The cartel flirts with panic mode as gold & silver finally get pounded into what can only be described as a sweet weekend flash sale…

Editor’s Note: Chart set-up around 1 p.m. EST. This Friday Wrap does not include the mid-to-late afternoon price action.

And it’s all weekend long!

It’s so kind of the cartel to slash prices.

It is almost as if they want the paper market to blow up.

Either way, the cartel may have just smashed prices a little too much.

Because we understand one of the most important aspects of investing: The dip.

In bull markets, smart investors buy on the dip.

Thanks to a desperate cartel.

Which will ultimately fail.

So we have this dip.

How much longer will it last?

Which means smart stackers have plenty of time to plan.

I do not think this dip in gold & silver prices will last much longer.

Nor do I think the price cuts will go that much deeper than where they are now.

In other words, ‘Ol Half Dollar ain’t lookin’ this gift horse in the mouth.

Gold is dirt cheap too.

OK, “Hey Half Dollar, we’ve heard it a zillion times already, and we’re sick and tired of this crap!”.

Silver was also around 5 bucks at the turn of the century.

We are so very close to that next plateau higher.

For now, however, it’s the waiting game.

Being able to wait it out or not.

There is no “get rich quick”.

Some call it “playing the long game”.

This latest price raid is literally like free money.

I’ll gladly trade my leftover dollars for phyzz at this point.

As a bonus, I’ll be taking my wealth out of their ponzi scheme.

So it’s really hard to complain about the latest cartel raid on gold & silver.

Now, if this year ends-up looking like last year, then sure, there will be dark days.

But I don’t think this year will be a repeat of last year, and I’ve been waiting for a dip.

I’m comfortable with where price is right now, because silver is still plentiful.

Which means we can add ounces to our stacks on the cheap.

We also don’t have to pay outrageous premiums.

So this is about as good as it gets.

Can we go lower from here? 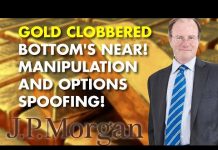