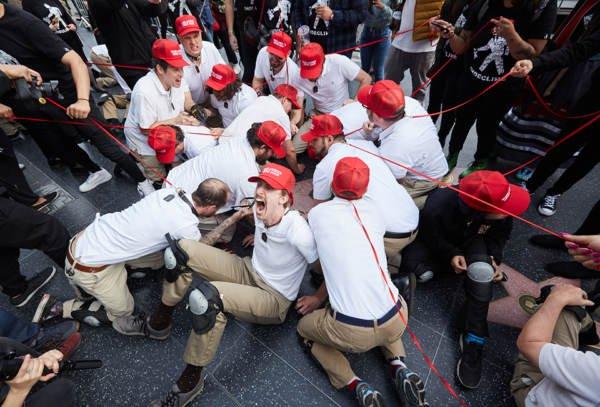 Leftist activists put ‘Make America Great Again’ hats on some severely self-loathing white men and paraded them through Hollywood on leashes as some sort of bizarre “performance art.”

As reported earlier this took place at Donald Trump’s star on the Hollywood Walk of Fame.

According to a press release from the activist group Indecline, over two-dozen “men and women of color and members of the LGBT community” placed leashes and custom made dog collars on white men in red M.A.G.A. hats and walked them on all fours up and down Hollywood Boulevard on Sunday. The group says that their “performance” was based on Cardi B’s recent Twitter battle with Tomi Lahren, in which the crass rapper told the right-wing pundit,  “Leave me alone, or I’ll dog walk you.” “The project, entitled ‘Hate Breed’, speaks to race relations in America, specifically the patience exhibited by those most affected by racism and bigotry and their willingness, despite having the greatest right to anger, to walk their attackers down a path to empathy,” the press release states. The men wore dog collars with tags that each had the name of a “racist white man.”

Hollywood Blvd is a popular destination for tourists and families, whom the artists clearly did not consider when staging their inappropriate stunt.