Another college contacted police after seeing the “It’s Okay To Be White” poster near campus.

Another college is shaking after discovering “It’s Okay To Be White” posters near its campus, calling the police and releasing a statement condemning racism and bigotry.

Bates College in Lewiston, Maine had numerous signs placed on telephone polls around its campus, prompting students to contact the school’s administration, who in turn called the police and condemned “any attempt to incite hatred and bigotry based on race,” according to local media.

According to News Center Maine, they consider the “It’s Okay To Be White” signs to be symbols of white supremacy.

The flyers were first noticed Sunday morning. One student snapped a picture and sent it to the school’s student body president, Walter Washington.

“I was actually very surprised,” Washington said in a phone interview Monday. “With Lewiston being one of the more diverse communities in the state of Maine, it was just kind of shocking to me.”

Washington says he notified police and the signs were taken down. He’s not sure how many in total were found around campus.

A statement from the school’s communication officer, Sean Findlen, reads:

“Bates is working actively with the Lewiston Police Department to investigate where these flyers were posted, by whom, and with what intent. We condemn any attempt to incite hatred and bigotry based on race, as contrary to Bates’ most deeply held values.”

Police are now investigating the origin of the signs, and reinforce the college’s position that these signs are hate speech.

One student was quoted as saying the simple slogan, “It’s Okay To Be White,” is “not something we’re going to tolerate, who ever it’s coming from.” Several also referred to it as “white supremacy propaganda.”

Multiple colleges across the country have enacted similar crackdowns against the innocent phrase, claiming it is somehow advocating white supremacy, or that it originated from the Alt Right and must be destroyed. 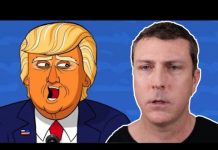 They Call THIS “Entertainment”?

Are Recent Reports of COVID Surges an Attempt to Suppress In-Person Voting?