by John Adams and Martin North from Adams Economics

John Adams from Adams Economics and Martin North discuss the recent testimony from the Reserve Bank of Australia (RBA) to the House of Representatives Economics Committee.

John Adams has been working behind the scenes with Australian federal law makers on the gold question and was able to encourage the Committee Chair to ask particular questions of the RBA about Australia’s so-called 80 tonnes of gold.

The RBA’s answers to the committee created new questions than answers. Adams showed that the RBA was not required to testify under oath to the committee which gave the Central Bank the freedom to lie and push propaganda.
Adams was also able to prove that the RBA Governor lied in November 2018 when he told a public audience that the RBA performs ‘regular audits’ of Australia’s gold. The reality is that the RBA has only ever conducted one physical audit and this was in September 2013.
Moreover, Adams exposes the RBA’s insane unsubstantiated claims about ‘gold leasing’. The RBA stated to Parliament that when the RBA engages in gold leasing the ‘gold does not physical move in the BOE vault’. This is an outrageous claim given that the RBA has no evidence to prove this! (They have only been in the BOE vault once for about 3-5 days in 20 years).
This recent chapter in the quest to bring Australia’s gold home is proof positive that something fishy is happening with Australia’s gold and with the Bank of England. 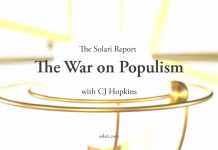 NYC to Have Coronavirus Checkpoints, Sheriff Warns of ‘Consequences’ for Violating Quarantine