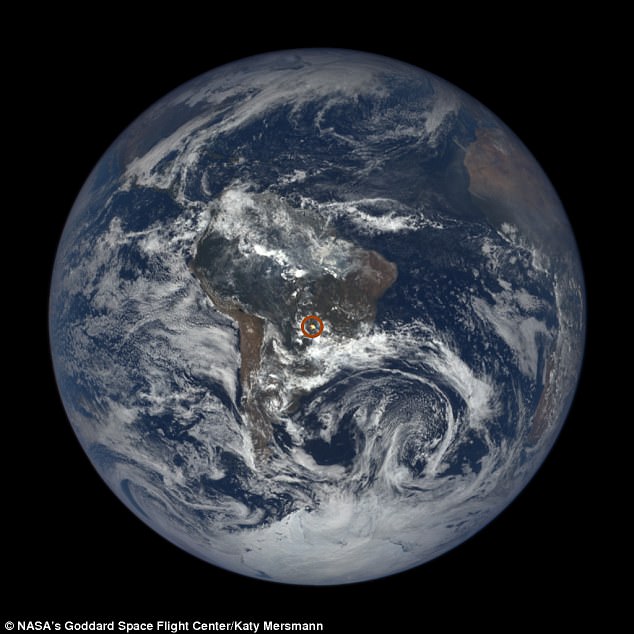 There’s been a couple of articles on space this week that are even stranger when viewed together. Mr. K.M. spotted them, and passed them along.  I read them, but it wasn’t until I started to read the second one that I had to sit up and take the technical arguments, or rather, the strange rhetoric of the second article, much more seriously. Was NASA resorting to mere hyperbole? Or was it resorting to a trickle of a leak and cautious “paradigm-changing rhetoric”? We’ll I’ll opt for the latter, which is the subject of today’s high octane speculation, but I’ll leave it up to everyone else to make up there own mind. After all, I’ve certainly walked off the end of the speculation twig more than a few times!

The first of these articles is, to be sure, rather technical, and concerns a new method of dating craters:

Some 290 million years ago, as the last trilobites scuttled across the seafloor, the skies above grew just a little more ominous. At that point, large asteroids — including the impactor that would later kill off the dinosaurs — began to rain down on our planet between two and three times more frequently than they did before, according to a study published today in Science.

Researchers spotted the trend while surveying impact craters on both Earth and our closest celestial neighbor, the moon. In these records, many impact craters date back to the past few hundred million years. Older ones are few. “It was surprising,” said Sara Mazrouei of the University of Toronto, the lead author of today’s paper. “We see the footprints of it, but what really happened to cause this?”

In other words, according to this study, there was a “sudden” uptick in the amount of “stuff” raining down on the Earth and the Moon, and the final question: what caused this spike in asteroid bombardment (if we may call it that)?

Before we get to that question, there’s one more bit of intriguing information about this newest study: the spike in impacts occurred more or less within the same time frame as the great extinction event, some 250,000,000 years ago, known as the “Great Dying”:

From between about 290 million years ago and now, their statistical analysis showed, big impacts rattled the moon’s surface 2.6 times more often than they had in the preceding 710 million years. That jump occurred around the same time as Earth’s largest mass extinction, known as the “Great Dying,” when about 90 percent of all species went extinct. The causes of that extinction are under debate.

The article continues by noting that the method has some skeptics and doubters, but most importantly – at least for our purposes – the question of what caused this spike in impacts is left unanswered in the article.

So I turned my attentions to the second article that K.M. sent along, and it contained something that really gave me pause, and set my high octane speculation “suspicion meter” into the red zone, because the second article was about the same story, but appeared on the NASA website:

Here the approach is somewhat different, for rather than focusing on lunar craters, as was the case in the first article, the focus was on rather arcane types of evidence concerning the “Great Dying” here on Earth:

250 million years ago something unknown wiped out most life on our planet. Now scientists are finding buried clues to the mystery inside tiny capsules of cosmic gas.

The case has gone unsolved for years — 250 million years, that is.

But now the pieces are starting to come together, thanks to a team of NASA-funded sleuths who have found the “fingerprints” of the villain, or at least of one of the accomplices

What they found was this:

Deep inside Permian-Triassic rocks, Becker’s team found soccer ball-shaped molecules called “fullerenes” (or “buckyballs”) with traces of helium and argon gas trapped inside. The fullerenes held an unusual number of 3He and 36Ar atoms — isotopes that are more common in space than on Earth. Something, like a comet or an asteroid, must have brought the fullerenes to our planet.

Becker’s team had previously found such gas-bearing buckyballs in rock layers associated with two known impact events: the 65 million-year-old Cretaceous-Tertiary impact and the 1.8 billion-year-old Sudbury impact crater in Ontario, Canada. They also found fullerenes containing similar gases in some meteorites. Taken together, these clues make a compelling case that a space rock struck the Earth at the time of the Great Dying.

And the conclusion from all this, as the article also notes, was an impact with an asteroid of the approximate size of Mount Everest. None of this, however, was what caught my interest. After all, catastrophe theories have been around for quite some time. What caught my interest was the strange rhetoric in which NASA couched its version of the story. There is for example, the way its article concludes:

Was the “crime” then merely an accident? Perhaps so. Nevertheless, it’s wise to identify the suspects — an ongoing process — before it happens again.

My initial reaction, when I read this concluding statement, was to recall the Affidavit of Dr. Carol Rosin. Most regular readers of this website and of my books will be familiar with what Dr. Rosin stated in that affidavit, given several years ago to Dr. Greer’s disclosure project, which was subsequently published in book form, collecting the statements of several people involved in various aspects of UFO studies, and so on. Dr Rosin, who at one time had worked for Fairchild Industries, and who in that capacity had come to know Dr. Wernher von Braun (who also went to work for Fairchild after he was “retired” from NASA), maintained in her affidavit that Dr. von Braun had told her about a long term plan to weaponize space. The plan was to invoke a string of enemies and threats that would make it necessary to place weapons in space, the first enemy being Communism, then terrorism, then nations of concern, then asteroids, and finally of course, extra-terrestrials.

I’ve blogged on this website previously about the occasional calls for planetary asteroid defense systems, most recently in conjunction with the Chelyabinsk meteor incident and the strange comments made by Russian Prime Minister Dmitri Medvedev a month priorto the incident. In his comments calling for asteroid defense, he disclosed the obvious implication: if one is going to destroy asteroids, one has to have some very powerful and sophisticated weapons to do so. He mentioned missiles with themonuclear bombs, and then went on to mention “other means”, which went unspecified, but one may hazard a guess that energy weapons were probably high on his list of “unspecified means” to nudge asteroids aside.

Which brings us back to that closing bit of strange rhetoric from NASA, for by calling the Great Dying a “crime” leaves one hesitating. By putting it in quotation marks, does NASA simply mean to indicate that the “crime” is merely a metaphorical one, caused by an asteroid? Perhaps, and that’s the most likely explanation, since the build of the article has been about precisely that. But then this is followed by an equally curious statement: “Nevertheless, it’s wise to identify the suspects – an ongoing process – before it happens again.” My problem here is the lack of those all-important qualifying quotation marks. “Crimes” would seem to imply the need for “suspects,” but no, at this point the implied metaphorical qualifier is dropped and all we get are plain old unqualified suspects. Read from the template of Dr. Rosin’s Affidavit, in other words, the rhetorical construction would seem to be able to support either the penultimate or ultimate threats needed to weaponize space: threatening asteroids, or threatening suspects, criminals capable of inflicting planetary mass extinction, perhaps by lobbing asteroids. (Just for kicks, think of Carlos Allende’s notes referring to the “great bombardment” in the secret Varo edition of Morris Jessup’s The Case for the UFO here folks. And for real kicks, remember my argument in Secrets of the Unified Field that one of the recipients of said secret Varo edition was – you guessed it – Dr. Wernher von Braun [see pp. 292-296])

There was something else in this article that suggested to me that my parsing of the concluding statement was not just crawling off the end of the twig. Earlier in the article, there was another set of statements that were either simply rhetorical and metaphorical, or else a bit of deliberate “meme-planting” and “conditioning”:

Some perpetrator — or perpetrators — committed murder on a scale unequaled in the history of the world. They left few clues to their identity, and they buried all the evidence under layers and layers of earth.