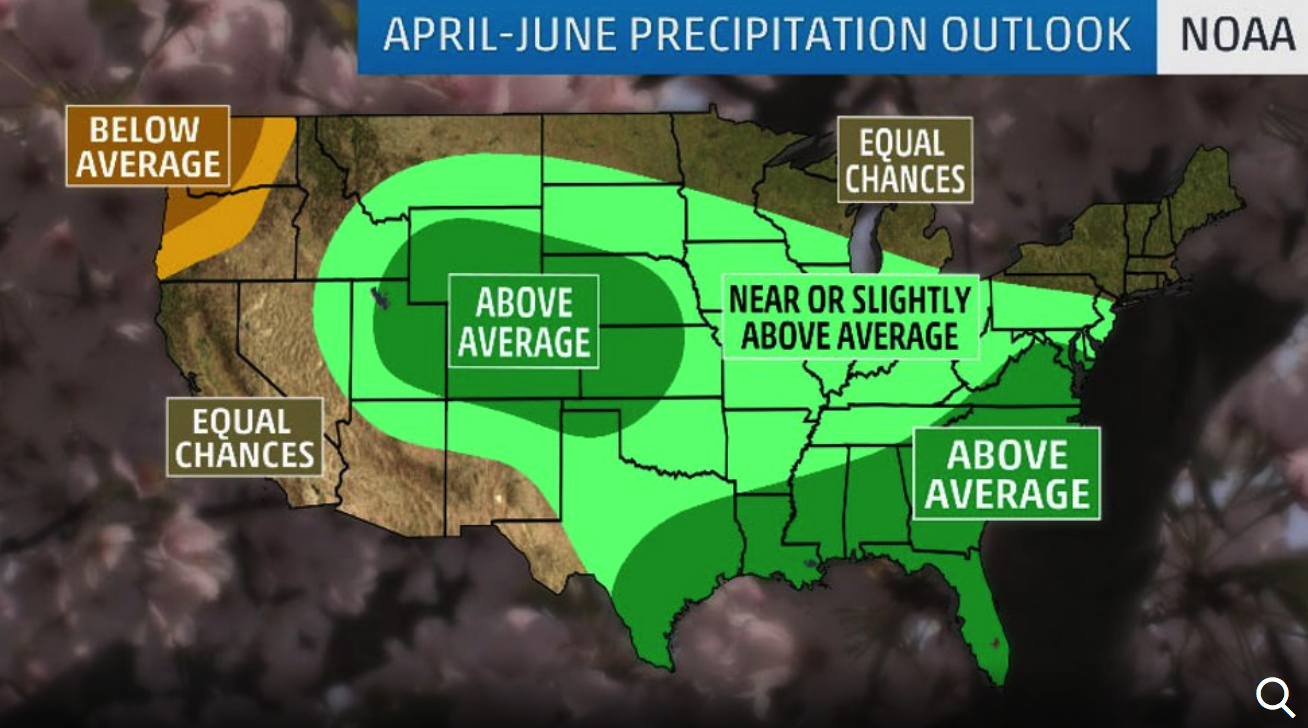 The flooding that just struck the middle part of the country was the worst blow to U.S. farmers in decades, but now the National Weather Service is telling us that it was just “a preview of what we expect throughout the rest of the spring”.  Can that possibly be true?  After the immense devastation that we have already witnessed, how much worse can the flooding possibly get?  Already we have seen thousands of homes and farms be completely destroyed, and we are being told that the total economic damage is in the billions of dollars.  Sadly, the truth is that a lot worse is still yet to come.  Thanks to a very snowy winter, a massive amount of snow is going to melt during the next several weeks, and that alone would produce tremendous flooding.  But on top of all of that melting snow, forecasters are telling us that it will be a very rainy spring.  In fact, the Weather Channel is warning that there will be “above-average precipitation across much of the Lower 48” over the next three months, and one meteorologist is forecasting that it is “not looking like we are going to see any dry stretches anytime soon”.  And this is on top of all of the very heavy rainfall that has been falling in recent weeks.  At this point, the Mississippi River basin has already gotten “three times as much rainfall as in a normal year”.

Even without any additional flooding, U.S. food production would be way down this year.  The recent flooding is going to keep thousands of farmers from planting crops on time, and thousands of others are not going to be able to use their fields at all.

But when you factor in what is going to happen over the next three months, we are talking about an agricultural disaster of unprecedented magnitude in modern American history.

At this moment, some areas in the Upper Midwest still have “more than 20 inches of snow” on the ground…

In the eastern Dakotas and Minnesota, more than 20 inches of snow remains on the ground. The Missouri, Ohio, and Mississippi Rivers drain the central United States, but it takes several weeks for the water to travel downstream. In the meantime, emergency officials are warning local residents to make evacuation plans as well as purchase flood insurance in certain areas.

All of that water has to go somewhere, and authorities are warning that 200 million people are at risk…

The record-setting floods deluging the Midwest are about to get a lot worse. Fueled by rapidly melting snowpack and a forecast of more rainstorms in the next few weeks, federal officials warn that 200 million people in 25 states face a risk through May.

A lot of people out there seem to think that the flooding will just be isolated to the major rivers, but that is simply not true.

Yes, all-time flooding records will continue to be shattered along the Missouri and Mississippi Rivers, but the National Weather Service is telling us that nearly “the entire eastern two-thirds of the nation” will be dealing with flooding this spring…

Almost the entire eastern two-thirds of the nation should see flooding this spring, National Weather Service deputy director Mary Erickson said at a news conference on Thursday. Some 25 states are forecast to see “moderate” to “major” flooding, the weather service said.

The Midwest floods are “a preview of what we expect throughout the rest of the spring,” she said. “The flooding this year could be worse than what we have seen in previous years … even worse than the historic floods we saw in 1993 and 2011,” Erickson added.

Are you starting to get the picture?

This is the worst case scenario for U.S. flooding that surpasses all previous worst case scenarios.  Thousands more farms will be destroyed.  Billions of dollars worth of additional damage will be done to our agricultural industry.  Food production is going to come up way short, and we are all going to experience tremendous pain at the supermarket as food prices skyrocket.

If you live in any of the following areas, you need to have your emergency plan ready, because things are about to get really, really bad…

U.S. farmers have already lost millions upon millions of bushels of wheat, corn and soybeans to the flooding that has already happened.  As I have repeatedly stressed, our planet is changing, weather patterns are becoming more severe, and even if they understood what is happening there is absolutely nothing that the radical environmentalists can do to stop it.

Just look at what is happening on the other side of the world.  Australia was just hit by a “severe category 3 cyclone”, and this came exactly one day after it was hit by a category 4 cyclone…

A severe category 3 cyclone blew into the key mining region of Pilbara in Western Australia Sunday, forcing evacuations and a halt to port operations, as the north of the country dealt with the effects of an even more powerful storm that hit the previous day.

Cyclone Veronica weakened from a category 4 storm before its core winds hit the coast near the mining centre of Port Hedland, but officials warned the system was slow moving and would continue pounding the region with gale force winds and heavy rain for 24 to 48 hours.