The major economies have slowed suddenly in the last two or three months, prompting a change of tack in the monetary policies of central banks. The same old tired, failing inflationist responses are being lined up, despite the evidence that monetary easing has never stopped a credit crisis developing. This article demonstrates why monetary policy is doomed by citing three reasons. There is the empirical evidence of money and credit continuing to grow regardless of interest rate changes, the evidence of Gibson’s paradox, and widespread ignorance in macroeconomic circles of the role of time preference.

The current state of play

The Fed’s rowing back on monetary tightening has rescued the world economy from the next credit crisis, or at least that’s the bullish message being churned out by brokers’ analysts and the media hacks that feed off them. It brings to mind Dr Johnson’s cynical observation about an acquaintance’s second marriage being the triumph of hope over experience.

The inflationists insist that more inflation is the cure for all economic ills. In this case, mounting concerns over the ending of the growth phase of the credit cycle is the recurring ill being addressed, so repetitive an event that instead of Dr Johnson’s aphorism, it calls for one that encompasses the madness of central bankers repeating the same policies every credit crisis. But if you are given just one tool to solve a nation’s economic problems, in this case the authority to regulate the nation’s money, you probably end up believing in its efficacy to the exclusion of all else.

That is the position in which Jay Powell, the Fed’s chairman finds himself. Quite reasonably, he took the view that the Fed’s marriage with the markets was bound to go through another rough patch, and the Fed should use the good times to prepare itself. Unfortunately, the rough patch materialised before he could organise the Fed’s balance sheet for its next launch of monetary bazookas.

The whole monetary planning process has had to go on hold, and a mini-salvation of the economy engineered. To be fair, this time it is Washington’s tariff fight with China and its alienation of the EU through trade protectionism that has interrupted the Fed’s plans rather than the Fed’s mistakes alone. But by taking early action the hope is the Fed can keep confidence bubbling along for another year or two. It might work, but it will need a far more constructive approach towards global trade from America’s political-security complex to have a sporting chance of succeeding.

However, buying off a crisis by more money-printing does not represent a solution. It is commonly agreed that the problem screaming at us is too much debt. Yet, the inflationists fail to connect growing debt with monetary expansion. The Fed’s objective is to encourage the commercial banks to keep expanding credit. What else is this other than creating more debt?

Powell is surely aware of this and must feel trapped. However, what his feelings are is immaterial; his contractual obligation is to keep the show on the road, targeting self-serving definitions of employment and price inflation. He will be keeping his fingers crossed that some miracle will turn up.

It is too early to forecast whether the Fed will manage to defer for just a little longer the certainty that the monetary imbalances in the economy will implode into a singularity, whereby debtors and creditors resolve their differences into a big fat zero. That is not the purpose of this article, which is to point out why the underlying assumption, that interest rates are the cost of money which can be managed with beneficial results, is plainly wrong. If demand for money and credit can be regulated by interest rates, then there should be a precisely negative correlation between official interest rates and the quantity of money and credit outstanding. It is clear from the following chart that this is not the case. 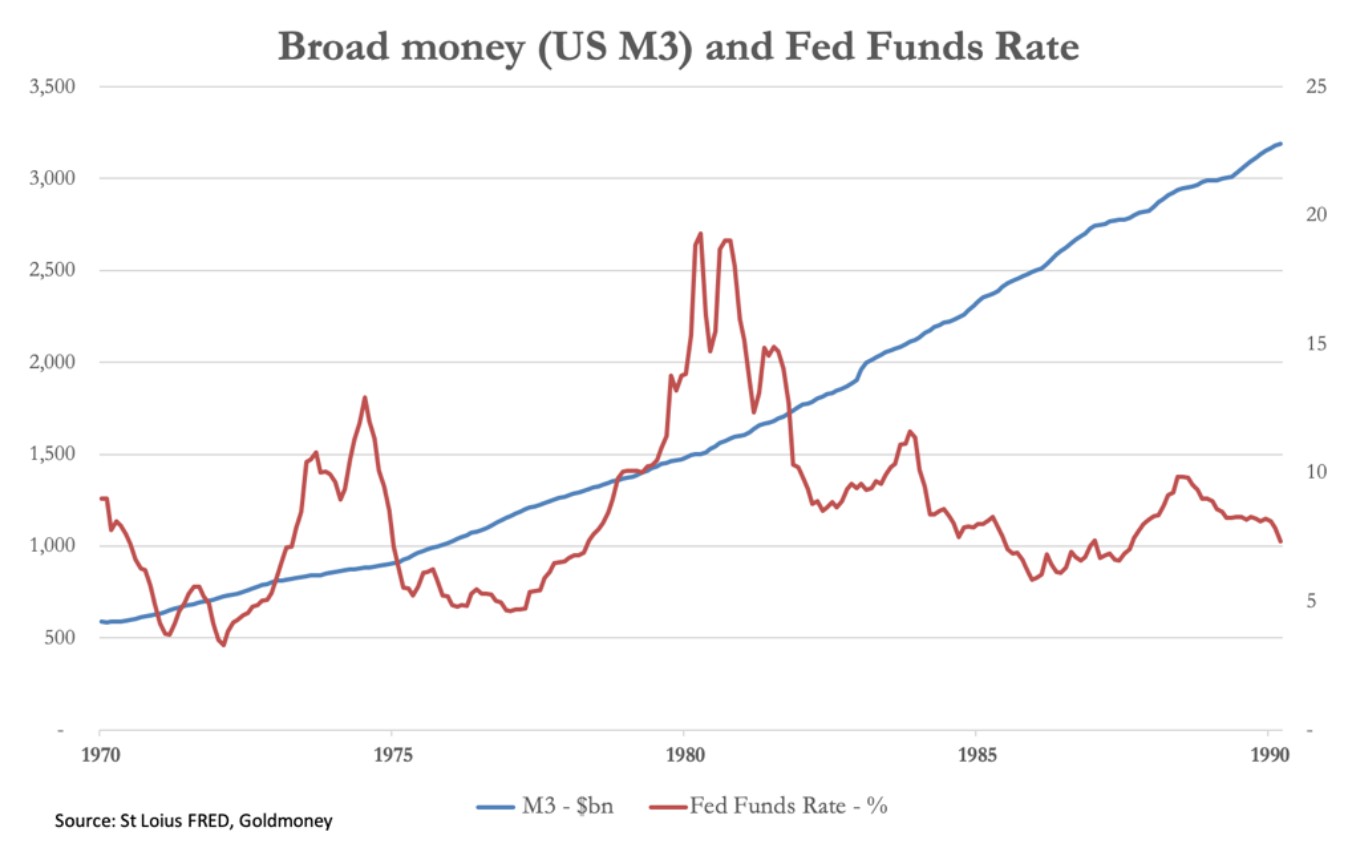 This chart covers the most violent moves in Fed-directed interest rates ever, following the 1970s price inflation crisis. Despite the Fed increasing the FFR from 4.6% in January 1977 to 19.3% in April 1980, M3 (broad money and bank credit) continued to increase with little variation in its pace. Falls in the FFR designed to stimulate the economy and prevent recession were equally ineffective as M3 continued on its straight-line path after 1980 without significant variation, and it is still doing so today. There is no correlation between changes in interest rates, the quantity of money, and therefore the inflationary consequences.

From the chart above, it is clear that the central tenet of monetary policy, that the quantity of money can be regulated by managing interest rates, is not borne out by the results, and therefore the role of interest rates is not to regulate demand for credit as commonly supposed. This is confirmed by Gibson’s paradox, which demonstrated that a long-run positive correlation existed between wholesale borrowing rates and wholesale prices, the exact opposite of that assumed by modern economists. This is shown in our second chart, covering over two centuries of British statistics. 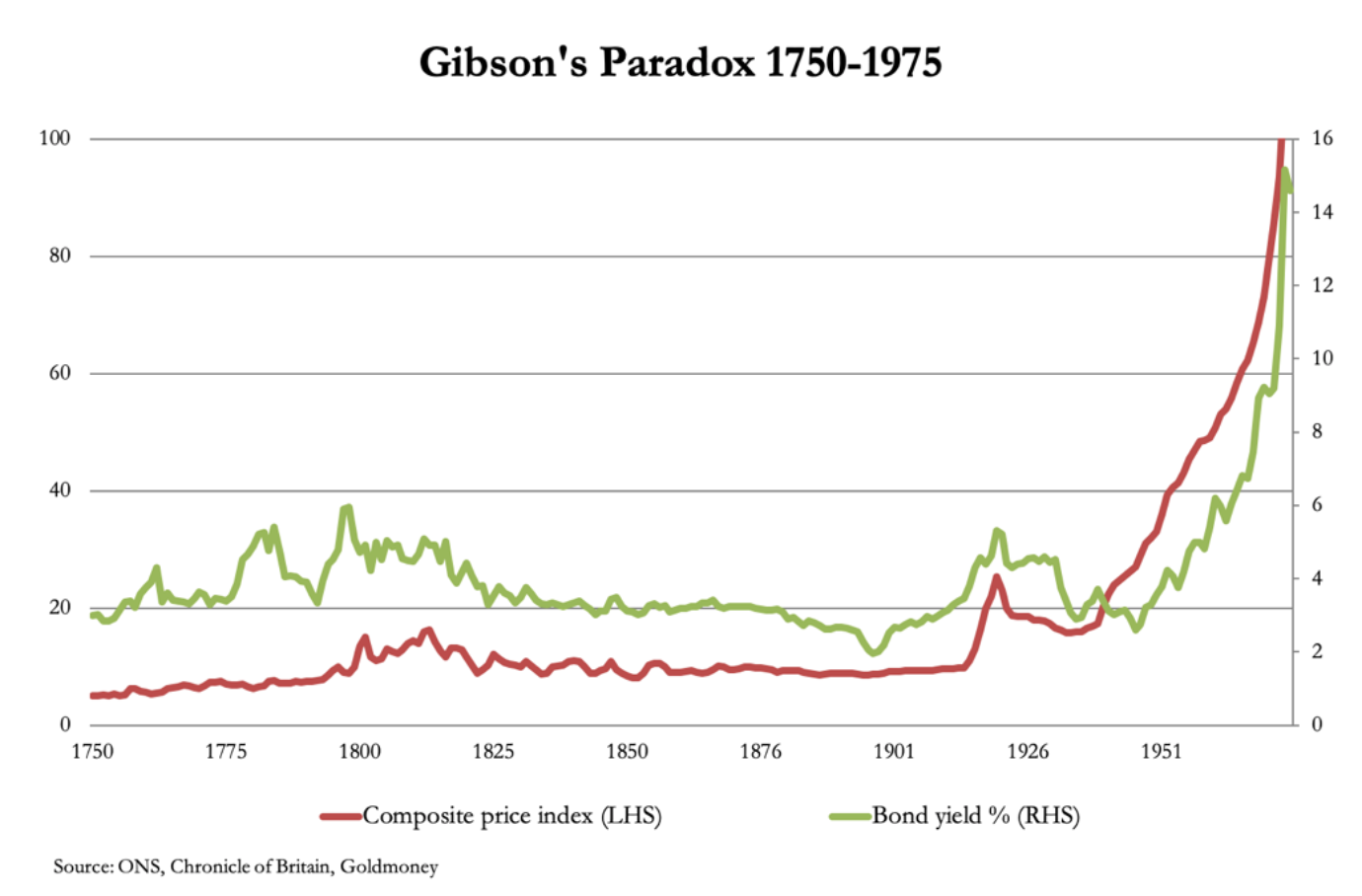 Economists dismissed the contradiction of Gibson’s paradox because it conflicted with their set view, that interest rates regulate demand for money and therefore prices[i]. Instead, it is ignored, but the evidence is clear. Historically, interest rates have tracked the general price level, not the annual inflation rate. As a means of managing monetary policy, interest rates and therefore borrowing costs are ineffective, as confirmed in our third chart below.