Nancy Pelosi doesn’t want you to have the protection of a wall on the border. But she has a huge wall around her house. I bet she even locks her doors and has security devices and personnel to protect her property. Of course, it is not likely that drug dealers, pedophiles and other illicit types found at the border are visiting Nancy’s house. May I suggest that a group of middle class Americans storm the Pelosi wall and party on her front lawn. When  they run out of snacks, they should enter her house and replenish party supplies.Of course, Pelosi would seek a bail out from the American taxpayers. Maybe when all is said and done we can get Nancy to say, we need to pass the border wall so we can see what’s in it. 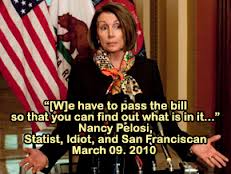 In Part One of this series, the point was clearly made that organized crime and terrorists are embedded into the social and political structure of the Democratic Party. The case was also made that former Mexican President, Nieto, was in the hip pocket of the cartels as was Eric Holder and Loretta Lynch run DOJ.

In this article, it will be made abundantly clear that the two political leaders of the Democratic Party, Speaker Pelosi and Presidential candidate, Kamala Harris, have criminal ties organized crime and associations with groups that should lead to a conviction for treason. this article will focus exclusively on Pelosi, Part Three will expose Kamala Harris for who and what she is.

Someone’s family background does not necessarily disqualify one from occupying a position of public trust. However, Pelosi has lived up to her background as “daddy’s little girl”.

Pelosi’s father was a hard core member of the Baltimore mafia and his little girl, Nancy, followed right in his footsteps. Thomas “Big Tommy” D’Alesandro, Jr., a five term Democrat US Congressman from Maryland and three term Mayor of Baltimore.  Pelosi’s father was closely associated with the members of the “Baltimore Crew.” This faction of the mafia was closely related to New York’s Gambino crime family. Pelosi has definitively acted in accordance with the Mafia agenda.

Ask yourself a question: Why wouldn’t Pelosi support border enforcement against child-sex-trafficking? Why wouldn’t any elected American official support this position? Of course they would unless they were in the business of supporting this criminal enterprise. At the State of the Union Address, President Trump stated that his administration was committed to stopping the practice. Pelosi did not applaud or even nod in approval. She scowled at this comment. This is why she is not in favor of border enforcement as she is too busy supporting the drug and child-sex-trafficking criminals who use lax border enforcement as a shield for their illegal activities. Pelosi is one of them and it is clear that her family never left the mafia and their illicit business endeavors. Subsequently, Pelosi’s criminal affiliations are not just a case of guilt by association. The D’Alesandro mafia ties can be traced all the way back to the Black Nobility. Who were they? They were the banking front men for the Rothschilds’. In other words, Pelosi’s family ran in very rarefied air. According to Paul Preston’s research, the mafia ties also put them in the company of the Jesuits, the group, the Pope, that is dismantling the Catholic religion. Today, the Pope calls for the creation of Chrislam (Islam and Christianity combined and he is promoting climate change as well as mass migration by 3rd world immigrants into 1st world countries). Does any of this sound familiar when it comes to Nancy Pelosi?

This is why Pelosi would like to dismantle ice. Pelosi, like most other Democrats, seeks a no law enforcement zone at our nation’s border with Mexico and her complicity in organized crime explains why she so opposes border enforcement of any kind. This also explains how she has so greatly increased her personal wealth on a public servant’s salary of 170,000 per year. But these are not  Pelosi’s only transgressions. She is a traitor of the highest order. She is actively working against the national security interests of this country and I cannot believe that the following is not getting more traction.

The CSS has learned and previously published that Pelosi has traveled to to Mexico City twice. Why? And why hasn’t this been front page news, given the nature of her visit.

Nancy Pelosi and her Democratic party’s attempts to block the wall   despite overwhelming support for the wall by more than half of America. Further, there is significant evidence that the wall is needed needed indicate there is an unknown reason for their defiance and the roots of that defiance lies in.

In May of 2016, US Speaker of the House Nancy Pelosi visited the President of Mexico along with other Congressmen, including little known Texas Congressman Beto O’Rourke who recently said that it was time to ditch the Constitution. Funny how the same names keep appearing. What these Democrats discussed was never revealed.

So, what was America’s biggest Mafia Princess doing in Mexico City? Actually she has been there twice. It is apparent to some that Pelosi is coordinating her domestic agenda with that of these planned incursions of the migrant caravans. One can reasonably draw the conclusion that Pelosi was in Mexico City to help coordinate the Democratic Party response to the waves of caravan invasions of our southern border. Pelosi is clearly in charge of the radical wing of the Democratic party and how they are undermining the sovereignty of this country. And since we know that paramilitary groups are training in Central America for a Red Dawn invasion of the US, and these troops are coming across southern border, right now, then we can conclude that Pelosi is on board with them.

These event certainly point to the fact that Pelosi and the current Mexican President are on board with this plan. What plan, the coming day of infamy as these embedded paramilitary forces attack American cities as part of a well-coordinated plan to take America down. Steve Quayle has told me that he believes that Russia and China will attack the United States when we descend into domestic chaos and violence. I believe that Pelosi is contributing this plot. Further, I have an FBI informant who has been making these claims for 3 years, stretching back into the Obama administration.