It’s said that truth mirrors fiction. I’m finding this to be the case more and more these days.

Take the 1993 comedy Groundhog Day. Bill Murray wakes up each day to relieve the exact same daily circumstances and interpersonal interactions. He relives the same day, February 2, over and over again.

No matter what he does, the repetitive cycle won’t break.  He goes to sleep, wakes up to his alarm, and it’s the morning of Feb 2 again.

Likewise, in The Truman Show, Jim Carrey lives in a simulated environment where everybody’s an actor in a popular TV show except him.  For him, it’s his real life.  But although he doesn’t realise it, everything around him is completely scripted and fake.

If merge these two movies together, they perfectly describe the world in which we live today.  Welcome to Groundhog Day meets The Truman Show.   Let’s call this mash-up The Groundhog Show.

In this composite story you, the plucky central character, wake up every day in a world where the same mistakes are made over and over again by our so-called “leaders”.

Take the central banks, for instance. In this show, they continually blow massive credit bubbles over and over again, which then result in widespread, painful losses when they inevitably burst. And the central planners keep doing this without any indication that they’re aware they’re repeating the same mistakes.

Their learning curve is dead flat.  Every day follows the same script as the previous day: 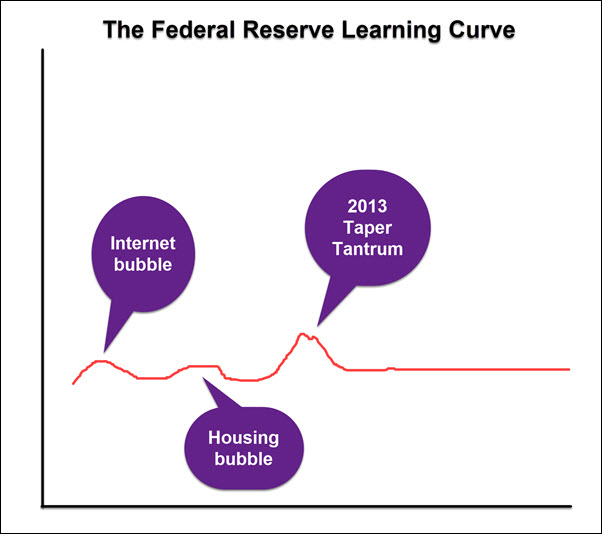 The Fed’s attempts to defeat the business cycle by replacing it with a credit cycle ended badly in 2000 with the horrible Dot-com crash.

Doubling down on that strategy then created the housing bubble and the Great Financial Recession, which resulted in an even worse crisis in 2008.

Neither of those sordid outcomes has factored into the Fed’s thinking, at all, as they — along with the other major world central banks — have set about tripling down on their serial bubble-blowing ways, which have resulted in the biggest-ever “Everything Bubble” the world now finds itself in.

There are no good explanations for that behavior, save this one: 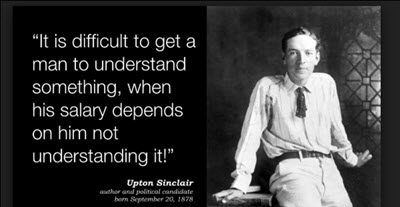 Which really isn’t very satisfactory to those of us who are also stuck in this movie, but cursed with the ability to see and remember cause and effect.

Truthfully, there are no good reasons for why our society is in the mess we’re in. With better decision-making and a modicum of accountability, we could have avoided many of the issues we’ve created for ourselves:

Living in The Groundhog Show

Our daily experience of the world is now being shaped by people busy writing scripts and narratives that are so preposterous that they might as well be penned by screenwriters grasping for new ideas in the 8th season of a show that has already burned through every conceivable plot angle:

“Hey, how about we write an entire show around the idea of a high school kid standing silently while smiling somehow being existentially menacing to the Native American ‘elder’ that actually started the whole thing by walking up to that legal minor while beating a drum directly in his face?  We could really play around with people’s emotional buttons big time I think…”

The larger plot of this movie, of course, revolves around the increasing difficulty of those stuck in it to continue to buy its premise.  Once you lose the plot line, once you can see the programming for what it is, it becomes nearly impossible to continue to happily participate in a story that lacks any integrity and provides no meaning or purpose.