This week saw both the US government and the EU set a deadline of February 23rd for Venezuela’s legitimate and democratically elected president, Nicolas Maduro, to step down from power and hand the country over to the CIA’s hand-picked puppet, Juan Guiado, whom Washington has declared as Venezuela’s president.

For the last few weeks, Washington, along with its local client states in Brazil and Colombia, have been planning to created a staged provocation at designated flashpoints along the Venezuelan border under the pretext of “delivering much-needed aid to the poor Venezuelan people.”

Initially, the U.S. had hoped to be able to distribute tons of food and medicine as a public relations stunt to project its humanitarian virtue to the world and to the people of Venezuela and thus, exposing the ineptitude and inability of the Maduro government to provide for its own people, whilst simultaneously improving the legitimacy of its man Guiado. However, suspicions grew when talk of covert smuggling of US weapons to ‘rebels’ in Venezuela and Colombia began to materialize – casting doubt on their “humanitarian mission”.  The Maduro government in Caracas accused the US and its clandestine agencies and their front organizations like USAID of using the aid deliveries as a tactic to foment instability and ultimately regime change in Venezuela. For this and other reasons, leading international aid agencies like the Red Cross and the UN wanted nothing to do with the US operation.

Yesterday, their suspicions were proven correct, as a series of provocations were staged by US-backed ‘opposition’ gangs at border crossing points with Colombia and Brazil – which were then picked up by corporate mainstream media outlets, and US war hawks like Marco Rubio only to be blamed on the ‘Maduro Regime.’

The US-backed opposition’s call for a “human avalanche” to force American aid into Venezuela has erupted in violent clashes. Tensions were running high and the opposition soon claimed that government forces have killed civilians.

Self-proclaimed “interim president” Juan Guaido had called on his followers to create a “human wave” and bring the “avalanche” of humanitarian aid across the borders from Brazil and Colombia on Saturday. He’d crossed into Colombia unmolested the day before, to attend a concert extravaganza in support of regime change and organized by British mogul Richard Branson. Rather than lead the charge across the bridges himself, however, Guaido was nowhere to be seen on Saturday afternoon, RT correspondent Dan Cohen reported from Cucuta, Colombia.

Opposition supporters clashed with Venezuelan border security forces in several hotspots on Saturday, pelting police officers with rocks and setting tires on fire. In one instance, protesters ripped up a tree and used it as a battering ram against Venezuelan police vehicles. 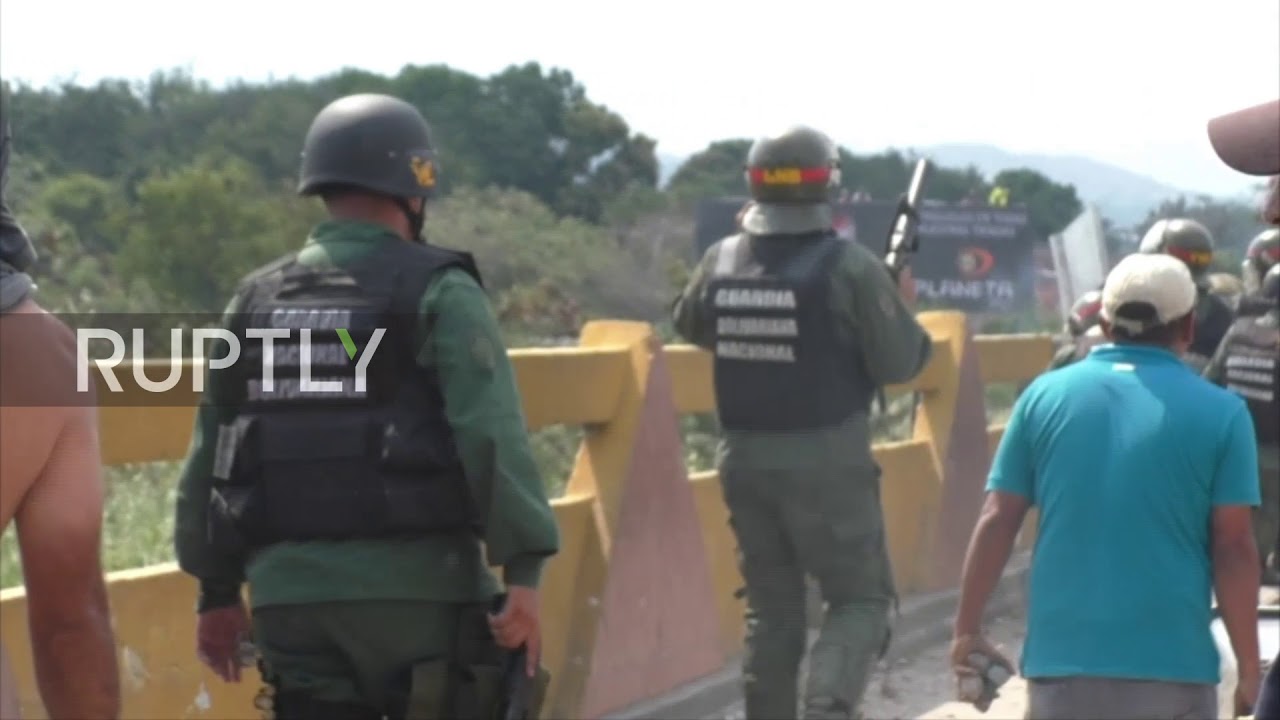 .
While the Tienditas bridge – featured in a lot of Western media reports about the tensions on the Venezuela-Colombia border, but never opened for traffic – remained calm, there were several incidents at the other two bridges in the area, and police had to use tear gas on several occasions.

Another shocking incident happened at Simon Bolivar Bridge, where three apparent defectors who the government in Caracas called ‘terrorists,’ hijacked armored carrier vehicles and rammed through the border posts into Colombia, injuring several people with total disregard for civilian lives. With the military mostly maintaining loyalty to the Maduro government, only some 60 servicemen, including a number of officers, have defected so far – a rate that displeases both the opposition and officials in Washington. 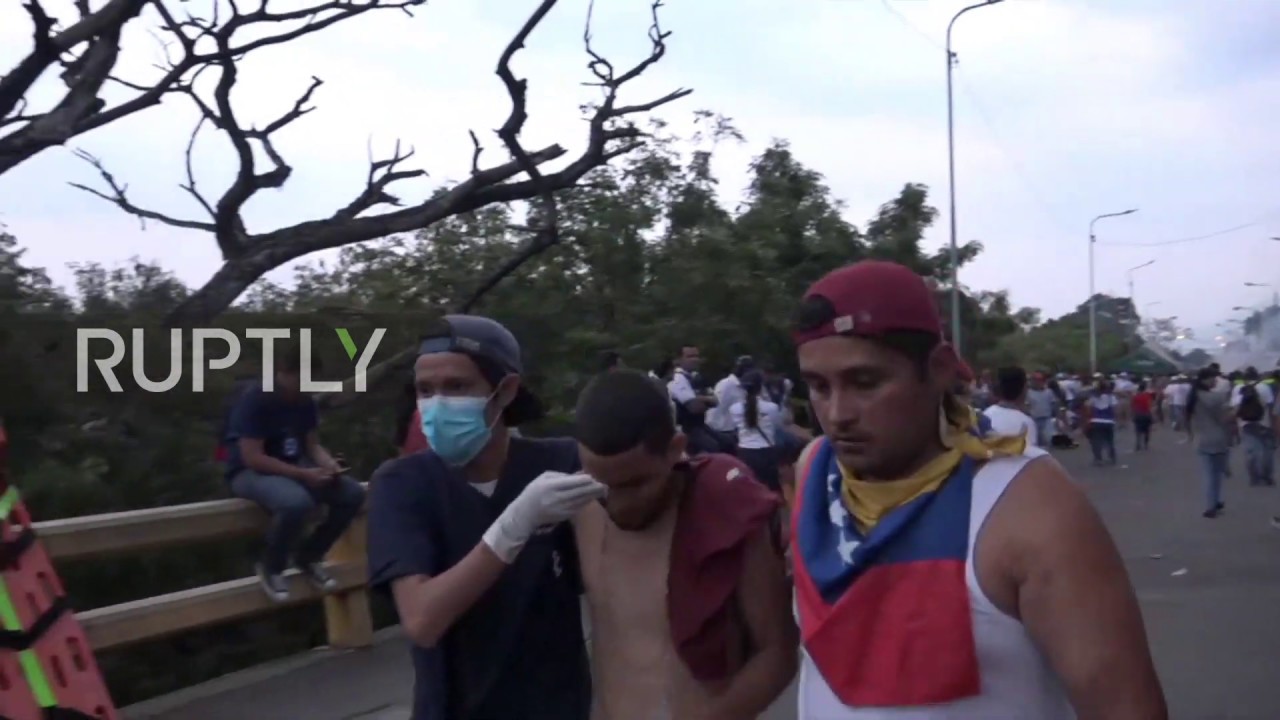 At least one truck attempting to get into Venezuela was set on fire, apparently before it could cross the border. Opposition activists circulated a photograph of the burning vehicle on the Francisco de Paula Santander bridge, though it was not clear who torched it and whether is was done deliberately or happened accidentally.

Meanwhile the world’s largest international aid organization has demanded that “unaffiliated”activists at the Venezuela-Colombia border not use their insignia, as it risks “jeopardizing our neutrality, impartiality & independence,” the International Federation of Red Cross and Red Crescent Societies said.

With a lot of unconfirmed reports and videos circulating on social media, two people were reportedly killed in Santa Elena de Uairen, which is near the Venezuelan border with the Brazilian state of Roraima. One of the videos shows people being carried away after what were said to be clashes between security forces and Guaido supporters.

Reports of at least one dead in Santa Elena de Uairen, Venezuela, after violent clashes between anti-government protestors and Venezuelan security forces. Lots of videos circulating of different incidents of violence happening now in Venezuela. pic.twitter.com/X9PAPsoDHj