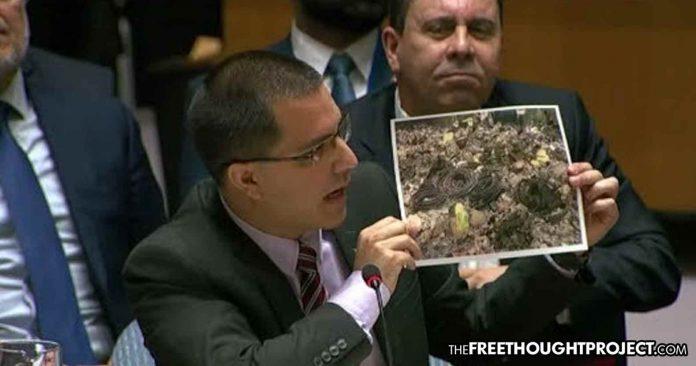 The Venezuelan Foreign Minister, Jorge Arreaza, showed the world this week why they are not accepting ostensible “aid” from the US.

The opposition-led and US-backed operation to drive trucks with humanitarian aid over the Colombia-Venezuela border led to violent scuffles which saw many police officers injured and several trucks set on fire.

Denouncing the botched delivery as a “well-orchestrated operation to violate the territory of Venezuela,”Arreaza presented what he called evidence of the US-led effort being a Trojan horse aimed at inciting a coup.

“And let me tell you, when the trucks were inspected, it turned out that there was not just food and medicine in the trucks, but there was equipment for barricades. There were nails, wire and so on and so forth. And this is what is used by the opposition in Venezuela,” Arreaza said, showing the photos of what looked like piles of heavy wire lying on the ground.

Arreaza said that Caracas also has video proof that can be viewed by all those interested.

Praising the Venezuelan Army and police response to the attempt to smuggle in the “aid,” he said that it was “the latest chapter of the coup” which has “failed.”

However, it was an uncaptioned tweet by Rubio that has drawn the most attention online, being slammed as a thinly-veiled death threat against the Venezuelan president.

US Senator @marcorubio tweets picture of Gaddafi’s murder as a threat to Maduro https://t.co/Q8XHUMSXSO pic.twitter.com/f6d9bLv17I

The tweet posted by Rubio on Sunday is an image of late Libyan leader Muammar Gaddafi as he was being lynched by a mob of US-backed opposition fighters.

Arreaza said that Rubio’s open call for violence is incompatible with American values, since the US prides itself on being the paragon of democracy.

Rubio’s and other Trump administration officials’ push for a military coup in Venezuela could be part of Trump’s re-election strategy, Arreaza said.