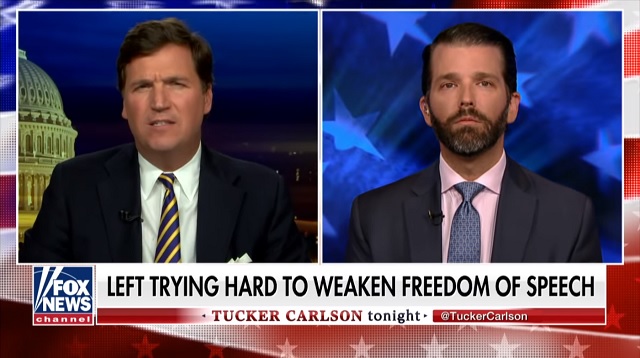 On his show Tuesday night on Fox News, Tucker Carlson talked about the threat of “woke capital” censoring right-wingers all over the internet with Donald Trump Jr and asked what the point was of having a Republican Senate if they’re not even willing to stand up for the free speech rights of their own voters.

“What’s the point of having a Republican Senate if they can’t stand up for free speech when their own voters are being targeted?” Carlson said.

Carlson’s opening monologue highlighted how Big Tech is censoring right-wingers through so-called “hate speech exemptions” which is nothing more than an excuse to bring about “utter conformity” and a “world where only approved opinions are allowed.”

He noted how PayPal banned Alex Jones, Laura Loomer and the immigration restrictionist website VDARE and highlighted how the CEO of PayPal, Dan Schulman, told the Wall Street Journal he’s been working with the Southern Poverty Law Center to decide who to ban.

PayPal’s CEO made a big admission — the company tskes advice from the disgraced SPLC.

The SPLC has had to pay million dollar settlements for falsely accusing people of bigotry.

Republicans in congress and/or the White House should investigate PayPal. https://t.co/x2HfoKOHPr

Carlson said how there “are entire non-profits whose only purpose are to close the network you are now watching.”

“They are tireless and they are well-funded,” Carlson said. “If they some day succeed, you won’t hear a word from the left about ‘censorship’ no, they’ll celebrate. An entire news media with one perspective, that’s their goal — total conformity which is the same thing as obedience.”

He went on to show how Democrats also want to disarm us all to “make the population obey” because their goal is “total control.”