Tommy Robinson, the co-founder of the English Defence League (EDL), has consistently blasted various media outlets for providing what he calls biased and unfair coverage of his activities and taking his words out of context.

British right-wing activist Tommy Robinson has organised a demonstration at the BBC’s Salford headquarters to protest against investigations by the media outlet’s Panorama programme into him.

During the protests, Robinson, whose real name is Stephen Yaxley-Lennon, showed his documentary, Panodrama, which was made in response to the BBC’s actions:

“Evidence of a corrupt media is that not one single journalist in Britain has reported on Panodrama”, he told a crowd chanting “Oh Tommy, Tommy”. 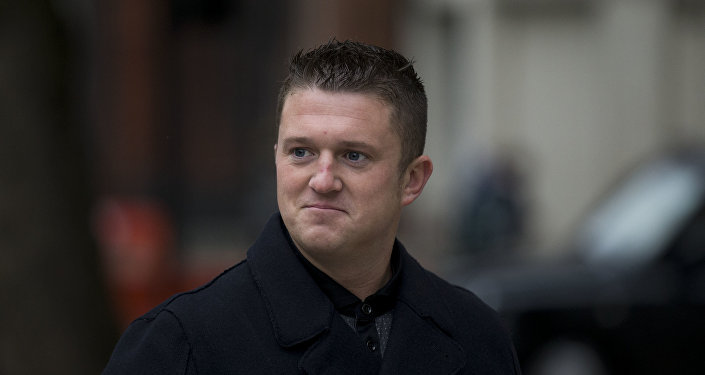 There was a slight technical hitch with the screening, and Tommy played footage from his wedding day to thousands of demonstrators gathered in Salford’s Media City. The clip was accompanied by the Take That song “Greatest Day”, in what he said was a tribute to his wife.

The one-hour documentary, which he eventually played, showed former aide to Robinson Lucy Brown secretly filming a meeting she had with BBC investigative journalist John Sweeney.

It also featured Robinson confronting Sweeney during a planned interview for the programme. The film ended with him showing his advocates how to cancel their TV licences if they are “fed up with paying for their propaganda”.

“We are constantly battling a media that lie”, he told the gathering.

In Manchester for Tommy Robinson’s film ‘Panodrama’. Undercover footage shows how the BBC tried to set him up for their ‘Tommy Takedown’ programme. Instead they walked into a trap of their own making. Biased Broadcasting Corp shown up for what it now is. Scrap the license fee! pic.twitter.com/Goia0KhkYE

After the video was screened, a clip, which was reported earlier this month, showing a drunken Robinson proclaiming himself “king of the whole Islam race” was played on the big screen, with Tommy exclaiming in front of the crowd: “F*ck you fake news”.