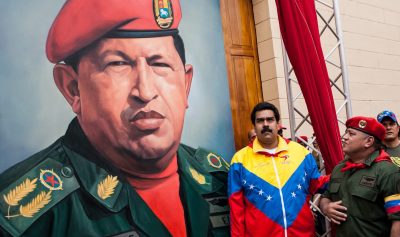 Travelling with Hugo Chavez, I soon understood the threat of Venezuela. At a farming co-operative in Lara state, people waited patiently and with good humour in the heat. Jugs of water and melon juice were passed around. A guitar was played; a woman, Katarina, stood and sang with a husky contralto.

“What did her words say?” I asked.

“That we are proud,” was the reply.

The applause for her merged with the arrival of Chavez. Under one arm he carried a satchel bursting with books. He wore his big red shirt and greeted people by name, stopping to listen. What struck me was his capacity to listen.

But now he read. For almost two hours he read into the microphone from the stack of books beside him: Orwell, Dickens, Tolstoy, Zola, Hemingway, Chomsky, Neruda: a page here, a line or two there. People clapped and whistled as he moved from author to author.By way of contrast, said Carter, the US election system, with its emphasis on campaign money, “is one of the worst”.

In extending the franchise to a parallel people’s state of communal authority, based in the poorest barrios, Chavez described Venezuelan democracy as “our version of Rousseau’s idea of popular sovereignty”.

In Barrio La Linea, seated in her tiny kitchen, Beatrice Balazo told me her children were the first generation of the poor to attend a full day’s school and be given a hot meal and to learn music, art and dance. “I have seen their confidence blossom like flowers,” she said.

In Barrio La Vega, I listened to a nurse, Mariella Machado, a black woman of 45 with a wicked laugh, address an urban land council on subjects ranging from homelessness to illegal war. That day, they were launching Mision Madres de Barrio, a programme aimed at poverty among single mothers. Under the constitution, women have the right to be paid as carers, and can borrow from a special women’s bank. Now the poorest housewives get the equivalent of $200 a month.

In a room lit by a single fluorescent tube, I met Ana Lucia Ferandez, aged 86, and Mavis Mendez, aged 95. A mere 33-year-old, Sonia Alvarez, had come with her two children. Once, none of them could read and write; now they were studying mathematics. For the first time in its history, Venezuela has almost 100 per cent literacy.

Then farmers took the microphone and told him what they knew, and what they needed; one ancient face, carved it seemed from a nearby banyan, made a long, critical speech on the subject of irrigation; Chavez took notes.

Wine is grown here, a dark Syrah type grape. “John, John, come up here,” said El Presidente, having watched me fall asleep in the heat and the depths of Oliver Twist.

“He likes red wine,” Chavez told the cheering, whistling audience, and presented me with a bottle of “vino de la gente”. My few words in bad Spanish brought whistles and laughter.

Watching Chavez with la gente made sense of a man who promised, on coming to power, that his every move would be subject to the will of the people. In eight years, Chavez won eight elections and referendums: a world record. He was electorally the most popular head of state in the Western Hemisphere, probably in the world.

Every major chavista reform was voted on, notably a new constitution of which 71 per cent of the people approved each of the 396 articles that enshrined unheard of freedoms, such as Article 123, which for the first time recognised the human rights of mixed-race and black people, of whom Chavez was one.

One of his tutorials on the road quoted a feminist writer: “Love and solidarity are the same.” His audiences understood this well and expressed themselves with dignity, seldom with deference. Ordinary people regarded Chavez and his government as their first champions: as theirs.

This was especially true of the indigenous, mestizos and Afro-Venezuelans, who had been held in historic contempt by Chavez’s immediate predecessors and by those who today live far from the barrios, in the mansions and penthouses of East Caracas, who commute to Miami where their banks are and who regard themselves as “white”. They are the powerful core of what the media calls “the opposition”.

When I met this class, in suburbs called Country Club, in homes appointed with low chandeliers and bad portraits, I recognised them. They could be white South Africans, the petite bourgeoisie of Constantia and Sandton, pillars of the cruelties of apartheid.

Cartoonists in the Venezuelan press, most of which are owned by an oligarchy and oppose the government, portrayed Chavez as an ape. A radio host referred to “the monkey”. In the private universities, the verbal currency of the children of the well-off is often racist abuse of those whose shacks are just visible through the pollution.

Although identity politics are all the rage in the pages of liberal newspapers in the West, race and class are two words almost never uttered in the mendacious “coverage” of Washington’s latest, most naked attempt to grab the world’s greatest source of oil and reclaim its “backyard”.