On the eve of President Donald Trump’s State of the Union address last night, the entire planet was in a period of great turbulence, great danger, and great opportunity.

The Old Paradigm—with its bestial concept of Man, the physical universe, and God—is violently imploding, Helga Zepp-LaRouche has stressed, and is virulent in its efforts to ensure the New Paradigm, centered on world-wide economic development, an explosion of scientific innovation and creativity and pursuit of the common good, does not defeat it and prevail. This is not to say that the Old Paradigm will be victorious; it only means that the dangers are great, as are the prospects for victory of the New Paradigm, with its contrary, creative concept of Man, the physical universe, and God.

We see this in the strategic situation, where the post-war order of arms control treaties is crumbling. It will be replaced either by the British Empire’s quest for uniliteral superiority, much as Bertrand Russell professed decades ago, which will be met by Russian and Chinese refusals to submit and possible thermonuclear war; or it will be replaced by a new strategic architecture built on Lyndon LaRouche’s twin proposal for joining great power cooperation on the Strategic Defense Initiative (SDI), employing new physical principles to render nuclear missiles obsolete and the Strategic Defense of Earth (SDE), joint projects aimed at modifying near space to ensure defense against space objects as well as creating the platform for controlling the weather and other atmospheric conditions.

We see this as well on the international political front, where the current regime-change operation against Venezuela is intended to continue the post-Westphalia world of Hobbesian war of each against all, and is designed as a trap for President Trump, to sabotage his drive to end London’s permanent war strategy. At this stage of humanity’s development, the only way national sovereignty can actually be defended is as part of a broader reorganization of the planet’s affairs around the common aims of mankind.

And we see it in the crumbling trans-Atlantic financial system, which cannot survive, with or without quantitative easing. Our immediate choices are stone age Green genocide and looting, or global reconstruction around LaRouche’s science-driven Four Laws, including China’s Belt and Road Initiative.

Where did Lyndon LaRouche imagine we would be in 50 years? That bold vision is the best assistance to a courageous President seeking to break the dismal hold of the Bush and Obama Administrations on the American imagination. 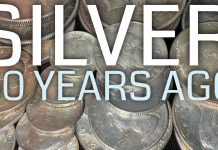