Consumers are doing their job only in a lackadaisical manner. But the student-loan scheme is hot.

It’s a tough job, but someone’s got to do it: Propping up the massive US economy. And consumers are doing it, but in a somewhat lackadaisical manner when it comes to spending money they don’t have. Consumer debt – more enticingly, “consumer credit” similar to “extra credit” – rose 4.7% in the fourth quarter 2018 compared to the fourth quarter last year. In the year 2018, Americans added $179 billion to their balances on their credit cards, auto loans, and student loans. Every dime was spent and added to GDP. It amounted to nearly 1% of GDP. If GDP grew 3.1% in 2018, just under one third of the growth was generated by that additional consumer debt.

Without this additional consumer borrowing, if consumers had just maintained their debt levels, GDP growth might only have been 2.2% in 2018, instead of 3.1%. So, a huge round of applause is due our debt slaves that now owe over $4 trillion for the first time ever, according to the Federal ReserveThursday afternoon: 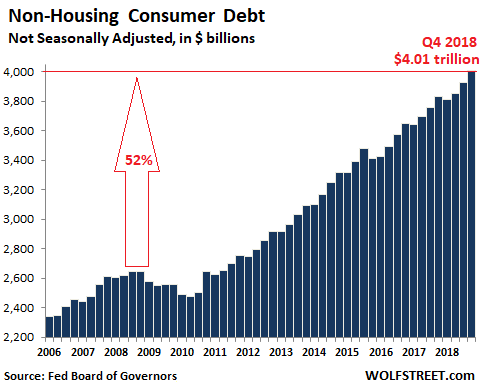 The $4.01 trillion in consumer debt is up 52% from the peak early in the Financial Crisis in Q3 2008. This is not adjusted for inflation. Over the same period, the Consumer Price Index rose 16% and nominal GDP rose 39%. Thus, Americans are sticking to their time-honored plan of out-borrowing both inflation (by a big margin) and economic growth.

Over the past 12 months, consumer debt rose by 4.7% while nominal GDP likely rose just over 5% (due to the government shutdown, Q4 GDP data has not been released yet, so I’m guessing). But nominal GDP outgrowing consumer credit growth is a rare phenomenon. The last time it occurred, and the only time since the Great Recession, was from Q1 through Q3 2015.

Total auto loans and leases outstanding for new and used vehicles in Q4 jumped by $41 billion from a year ago, or by 3.7%, to a record of $1.155 trillion, despite stagnant vehicle sales. The increase was due to rising prices of vehicles, the rising average loan-to-value ratio, and the lengthening average duration of loans: 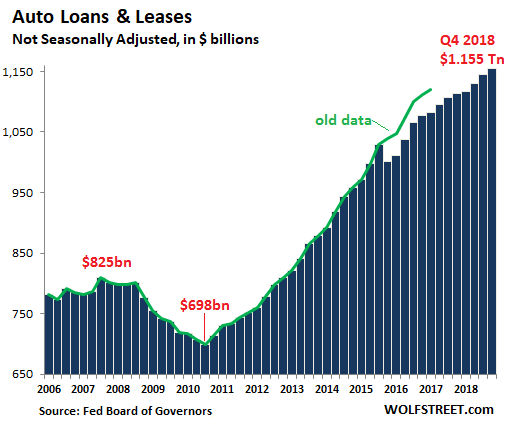 On a technical note, the green line in the chart above represents the old data before the large adjustment to consumer credit in September 2017. Every five years, consumer credit data is adjusted, based on new Census survey data. This time, it hit auto loans hard. I included the green line to show that in Q3 2015 it wasn’t a collapse of the car business that caused the precipitous drop in auto loans.

Credit card debt and other revolving credit, such as personal lines of credit, in Q4 rose 2.0% year-over-year to $1.045 trillion (not seasonally adjusted). Given that nominal GDP rose around 5% over the same period, consumers clearly fell short of the job they’re expected to do. Their job is to charge up their credit cards to the max. But they’re stubbornly refusing to do it. Credit card balances in Q4 2018 were only 4% higher than Q4 2008! What are these consumers thinking?! 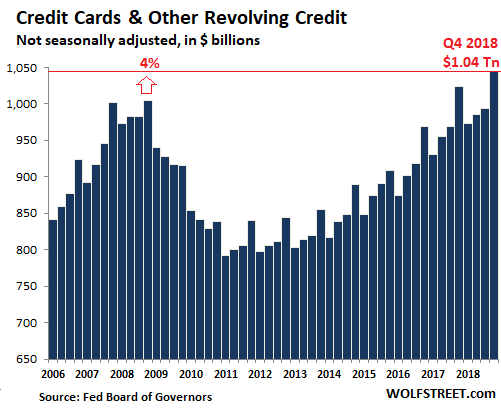 Baffled economists are scratching their heads, and banks a desperate. Credit card debt is the most profitable activity for banks, with usurious spreads between the rates charged on credit card balances that can go well beyond 20%, and the banks’ cost of funds, which in December was on average 1.06%, according to the San Francisco Fed’s Cost of Funds Index.

Student loans jumped by 5.3% year-over-year in Q4, or by $80 billion, to a new record of $1.57 trillion (not seasonally adjusted), having doubled since the beginning of 2010, even as higher-education enrollment declined 7% from 2010 through 2016, according to the latest data from the National Center for Education Statistics. Fewer students, but they each borrow more, to fatten entire industries from Apple and concert-ticket sellers to investors in the hot category of commercial real estate called student housing. They’re all feeding at the big trough of government-guaranteed student debt: 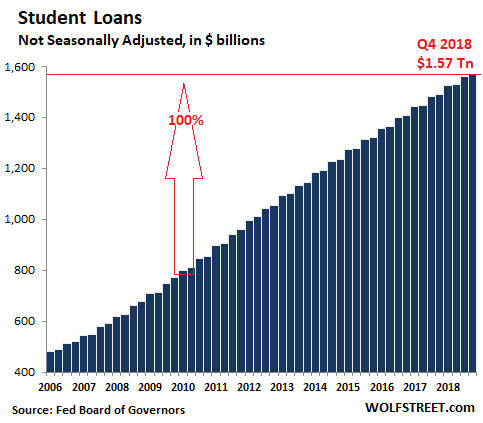 What is systemically wrong with the student loan scheme is that it’s a three-party deal — universities, government, and students – but without any kind of discipline imposed on them by the market or the government. It just ratchets higher quarter after quarter at a ludicrous rate, even as enrollment is declining.