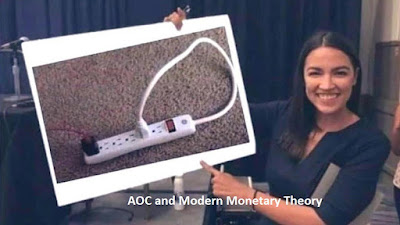 Over the past few months MMT, or Modern Monetary Theory, has exploded onto the financial scene. And not withstanding the Orwellian Newspeak that is encompassed in its title, MMT is simply Keynesian money printing on steroids.

Japan of course is the poster child for Modern Monetary Theory, as they have been expanding their monetary base for more than two decades without having to experience the normal repercussions of inflation and economic decline. And because so many modern day academics and ‘economists’ have swallowed hook, line, and sinker Japan’s ‘success’, this theory is now being touted as the way for government’s to provide unlimited benefits to all their citizens.

(Is it any wonder the economic advisers to the Democratic Presidential candidates are all pushing for free everything?)

But of course what is missed in all of this is the fact that as of today, all credit begins at the Federal Reserve, and is loaned or sold to the banks FIRST before it is distributed to the government, small businesses, or to consumers.  Thus like in Japan, where the central bank has to use its monetary credit expansion to buy market assets rather than provide liquidity to its real economy in order to avoid inflation, so too would MMT do what is occurring now already following 6-8 years of central bank stimulus.

Now, let’s look at how much the 1% has grown their wealth in that same period.

As you can see, the amount of wealth acquired by the top 1% moved exponentially over the past decade when the central banks began their QE programs of monetary expansion.

Of course many Socialists will say that THEIR programs would sufficiently put the new money almost ‘directly’ into the pockets of the people.  But all one has to do is look at the longstanding Food Stamp or (EBT) program and how the money is actually issued first to JP Morgan (who gets its cut), and after that it is distributed piece meal to the masses.