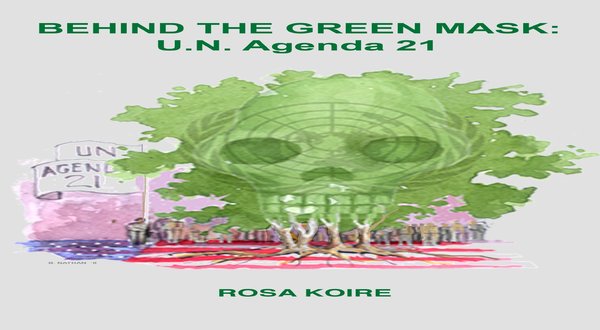 – Far Too Many Environmentalists Are ‘Watermelons’, Green On The Outside, Pink On The Inside

We’ve all heard the expression: “Green on the outside, pink on the inside.” It refers to phony environmentalists who use a pretended concern for nature, wildlife, and the environment as an excuse to destroy freedom and national sovereignty, wreck the economy, and enslave all of us. Unfortunately, many so-called “environmentalists” are indeed watermelons…thinly disguised communists.

I must confess that when I was young, foolish, and left of center I joined the Sierra Club, partly to go on their hikes and to make new friends (especially those of the young female variety), and partly because I really did (and still do) love nature and wilderness. The Earth’s animals, plants, and wildlands were created by God, who originally appointed Man as His gardener, the steward of the Earth, here to use its resources but also to preserve them. And many rank and file environmentalists sincerely care about nature. The problem is that the leaders of the environmental movement, all along, have pursued a very different agenda. Over time I became gradually more and more disillusioned with the Sierra Club and the environmental movement in general, finally quitting the organization some years ago. Its leaders must now pursue their evil agenda without my contributions.

The Sierra Club was founded 5/28/1892 in San Francisco by Scottish immigrant and hiker/climber of note John Muir; he had helped convince the US Government to create Yosemite National Park in 1890, our second such park after Yellowstone (1872). The Club supported the creation of the National Park Service in 1916. But the protection and management of wildlands could well have been left up to the individual states…so is the NPS necessary or merely another excuse to increase federal power while eroding state sovereignty? In April, 1968 the Club of Rome was founded, closely associated with the United Nations, beginning with only 30 wealthy and powerful members, advocating extreme population control measures. On 4/4/1980 Dave Foreman and four other radical environmentalists created the ultra-militant Earth First, and in 1992 in the UK equally militant people founded the Earth Liberation Front.

Under pressure from such groups, the US and the UN adopted ever more extreme environmental positions and increased their power and multiplied their bureaucracies. On 12/2/1970 “conservative” Richard Nixon created the Environmental Protection Agency by executive order, not by a law passed by Congress. Yet the decisions of its unelected (and often militant, arrogant, and ruthless) bureaucrats have somehow been given the force of law, and people have actually been fined and even imprisoned for disobeying them. So much for our late, great Constitution.

Congress did pass, and Nixie signed, the Endangered Species Act in 1973. This allows unelected bureaucrats to ruin businesses and lives to “protect” species that often are not endangered, may not even be present in a given area, and may not really be unique and separate species. Orchards died, denied irrigation water, to protect the snail darter in the Sacramento/San Joaquin River system.

Of course, the death of the trees prevented them from removing carbon dioxide from the air, but never accuse an environmentalist of being consistent. In 1992 the UN proposed Agenda 21 and its Wildlands Project, which has published official maps showing its goal of denying most land to humans or for human use, even for timber or watershed or Sierra Club hikers.

Anyone even vaguely familiar with America’s farmland can glance at the US portion of the map and see that the human population will be herded into urban enclaves (concentration camps in all but name) where they will slowly die of hunger, thirst, and disease since not enough farmland and watershed (let alone gas, coal, oil, timber, etc.) will be left to support them. The maps are widely published but scarcely anyone really looks at them.

Examples of econazi hypocrisy abound. My disillusionment with the Sierra Club leaders really began with their support of leftist politicians who advocated open borders and unlimited Third World immigration into our former Republic. The environmentalists advocate zero population growth and believe that a continued increase in population will bring about environmental collapse and mass famine. Although they exaggerate, I do believe that both Mankind and the Earth would have been better off if the population had stabilized far below its current level. But that is no justification for abortion or democide.

Were it not for immigration, the high birth rate of immigrant families, and the high birth rate of welfare families (often one and the same) the US population, now at a Third World level over 330 million, would have stabilized decades ago at closer to perhaps 200 million. There would be less traffic, less pollution, and less strain on resources. But, directly or indirectly, the econazis have supported both immigration and high welfare spending…creating the very problem they say they want to avoid. And the immigrants often set forest fires and leave large deposits of trash and human waste along their migration routes.

Showing their contempt for rural and working class people, the econazis have practically wrecked the logging industry in the US, often via court decisions, since we have allowed unelected judges to rule us. This has destroyed jobs, lives, and entire communities, and forced the US to import lumber from countries that do not have the kind of conservation measures that regulated our own logging. So tropical rainforests are being sacrificed …to protect the planet, don’t you know. The fanatics have blocked any logging in national parks and designated wilderness areas, and this, coupled with our former policy of fighting all forest fires, has resulted in the buildup of biomass to the point where fires, when they do occur, are truly catastrophic and virtually unstoppable, destroying forests, wildlife, watershed, and the soil itself. Had selective and careful logging been allowed all along at Yellowstone (to name but one example) the fires some years back would not have been so devastating.