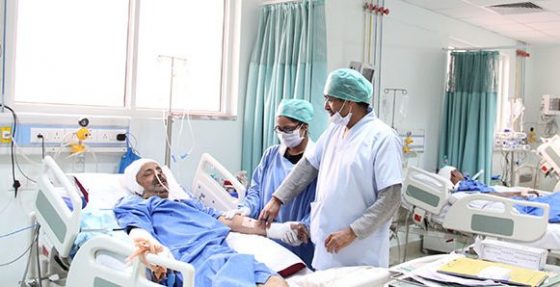 NHS (National Health Services) leaders, those in charge of the United Kingdom’s socialized healthcare, have said that hospital wait times have reached record lengths. Waiting times at A&E departments in England last month were at their worst levels since records began, despite pressures from flu and bad weather so far this winter being significantly lower than in 2018.

The figures should be a wake-up call to the government and the socialists in the United States.  Socialized medicine is designed to fail. No amount of additional government will fix it either.  The UK insists that it’s chronic underfunding in social care and a mounting staffing crisis is creating dangerous pressures in hospitals.  Yet spending on health care in the United Kingdom has more than doubled in the past 18 years, after adjusting for inflation. All of that is a problem because of government intervention, and the poor news will only continue to get worse, according to the UK news source, The Independent.

The United Kingdom’s horror stories should dissuade Americans from accepting any form of single-payer.  National Health Service, which celebrated its 70th anniversary on July 5, is imploding rapidly, according to Forbes.

The NHS has struggled to fully staff its hospitals and clinics since its inception in 1948. But today, the shortages are growing worse. 9% of physician posts are vacant making that a disastrous and deadly shortfall of nearly 11,500 doctors.  The NHS is also short 42,000 nurses. In the second quarter alone, nurse vacancies increased by 17%. Meanwhile, in the United States, nearly all states will have a surplus of nurses by 2030. Doctors and nurses simply don’t want to work for the state, which makes their lives far too difficult and their job far too intense for the money.

And it really isn’t that surprising that people don’t want to work as nurses in Great Britain; it’s a stressful job, with long hours and terrible working conditions – all implemented by the authoritarian government control. Some NHS nurses are taking positions at supermarkets because stacking shelves comes with better hours, benefits, and pay, according to a report in the London Economic. Imagine that; a private job is much superior to a government job.

The shortage of providers is what’s causing long wait times. In May of 2018, 4.3 million people in the United Kingdom were on waiting lists for surgery, a 10-year high. And these wait times are killing people. An analysis that covered just half of England’s hospitals found that almost 30,000 patients died in the past year while waiting for treatment. And according to Forbes, it’s only going to get worse. In some cases, the NHS has refused to provide treatment at all. In June of 2018, NHS England said that it would discontinue coverage of 17 procedures, including tonsillectomies and knee arthroscopies for osteoarthritis patients.