But deposit-taking banks have pulled back.

Lovingly known as “shadow banks,” nonbanks have come to dominate the mortgage market. And they originate the riskiest mortgages. The government — mostly the Federal Housing Administration (FHA) — is on the hook. Nonbanks do not take deposits and are not regulated by banking regulators (Federal Reserve, FDIC, and OCC). Their funding is derived mostly from selling the mortgages they originate, but also from bank loans and other sources. During the mortgage crisis, a slew of them got in trouble and, because they did not hold deposits, were allowed to collapse unceremoniously.

Today, there’s a new generation of shadow banks dominating mortgage lending. According to a February 2019 report by the Mortgage Bankers Association, the share of mortgage originations by nonbank lenders has surged from 24% in 2008 to 54% in 2017, while the share of large banks has plunged: 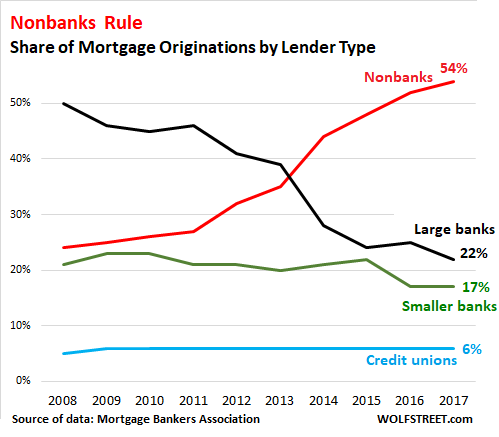 The largest nonbank mortgage lender, Quicken Loans, originated an estimated $86 billion in mortgages in 2017, according to the MBA’s February 2019 report, giving it a market share of just under 5% of all mortgages written during the year.

These shadow banks are unlikely to get bailed out in a crisis, and investors will take the loss. From that perspective, taxpayers are off the hook. But their counterparties are also at risk of losses – with the government by far the most exposed. These counterparties fall into two groups:

In its wide-ranging report and briefing materials (February 25, 184 page PDF) on the housing market and government involvement in it, the American Enterprise Institute (AEI) outlines how surging home prices push lenders to take ever greater risks. And as deposit-taking banks have pulled back from those risks, shadow banks have plowed ever deeper into them.

I will focus on a small aspect of the report: The increasing role of shadow banks in the mortgage business and the exploding role of the FHA in insuring and guaranteeing their mortgages that are becoming riskier and riskier.

FHA insures mortgages on single-family and multifamily homes to high-risk borrowers. It operates on the revenues it receives from the mortgage insurance premiums that borrowers pay upfront and monthly. To qualify for FHA insurance, mortgages must meet certain requirements. When homeowners default on their mortgages, the FHA covers 100% of the lender’s loss. It currently insures nearly 8 million single-family mortgages and about 14,500 apartment buildings.

The chart below by the AEI shows how nonbanks completely dominate FHA-guaranteed “purchase mortgages” (we’ll get to “refinance mortgages” in a moment). The chart excludes mortgages by State Housing Finance Agencies and Credit Unions, accounting for 4% of the FHA purchase-mortgage market. In November, the share of originations by nonbanks of FHA-insured mortgages surged to 85%: 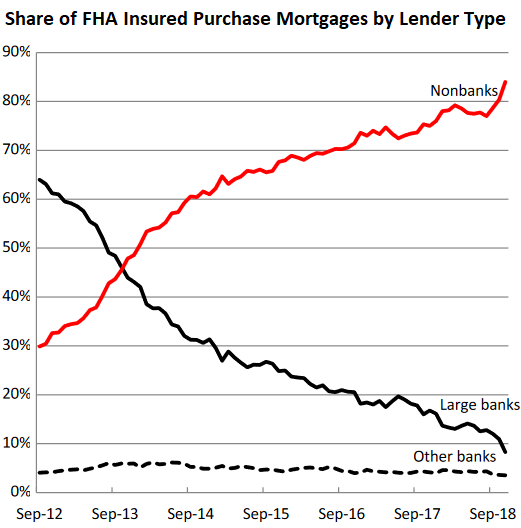 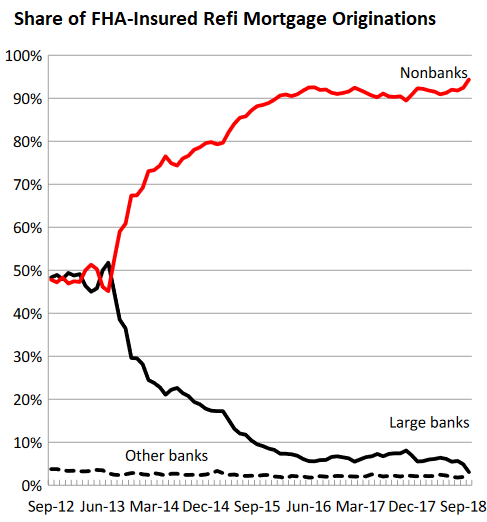 “Migration to nonbanks has boosted overall risk levels, as nonbanks are willing to originate riskier FHA loans than large banks,” the AEI says. This is shown by two risk measures.

The first is the Mortgage Risk Index (MRI), a stress test that measures how the mortgages that were originated in a given month would perform if subjected to the same stress situation as mortgages originated in 2007, which experienced the highest default rates as a result of the Great Recession.